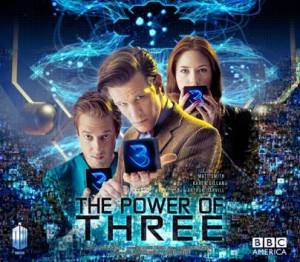 Not every episode of DOCTOR WHO can be absolute gold. There have to be slow episodes, talking heads episodes, and yes even somewhat dull episodes. “The Power of Three” is not the best episode in the new run, but it’s not the worst since the series restarted in 2005. It’s just kind of a yawn episode with some amusing moments here and there. I really feel that since the Ponds are leaving next episode that this was a bit of a love letter and resolution to allow fans to let them go. Plus we find out they’ve been traveling in the TARDIS on and off for 10 years!

The whole episode is really from the point of view of Amy (Karen Gillan) and Rory (Arthur Darvill), and it is a year of their life balancing their Earth life (real life) and their travels with the Doctor (Matt Smith). I do like the fact that we see just exactly what goes on in companions’ lives when the Doctor is not around, and how everything bends and shift when he is. I sincerely hope that they don’t kill off the Ponds in the next episode. I like when companions are still around to encounter new regenerations of the Doctor, and to help tie the different eras of the series together. I mean can anyone say they regretted seeing Sarah Jane Smith (Elisabeth Sladen) return? Or what about Jo Grant (Katy Manning) turning up on the SARAH JANE ADVENTURES? The fact that these companions were still out there to encounter the Doctor decades later just makes it kind of magical.  All of these people who have shared an amazing traveling experience in the TARDIS still have a special place in their hearts for the man that changed their lives.

Speaking of tying decades of this show together, did anyone else get just a wee bit misty when we find out that Kate Stewart (Jemma Redgrave) is Brigadier Sir Alistair Gordon Lethbridge-Stewart’s (Nicholas Courtney) daughter? What a lovely way to tie the classic U.N.I.T. years into the modern storylines. We’ve seen them in action before, but this is a flesh and blood tie to the past, and she was really quite perfect.

We also got a reappearance of Rory’s dad Brian (Mark Williams); who just brings a whole other level of charm with him. He’s such an endearing character, and of course we lose him when we lose the Ponds, so I’m going to be sad to see him go after such a brief period on the show.

And now the naughty bits. I kind of love the fact that Rory ends up being ushered downstairs in his ‘pants’ or boxer brief underwear to the rest of us. As far as I’m concerned he can wander his adorable rear around in those as much as he wants. Yes. I’ve had a thing for Rory pretty much since day one. Geeky, unconventionally handsome men are a weakness and DOCTOR WHO has had more than it’s fair share.

The black boxes in this episode are interesting, and I’m wondering if Character Options is already working on several versions for the toy market that do different things. I can only imagine that they are. Plus I’m willing to bet Shakri (Steven Berkoff) will get an action figure.

So onto to the biggest mystery of this episode. On IMDB the night it aired there was a woman listed in the credits as “The Rani”. Did I blink? Did I miss the return of a WHO villain? The interesting thing is that this woman has now been removed from the IMDB page, so was it a mistake or did they goof and put up a potential spoiler for the rest of the season waaaay too soon? Anyone else out there hear about the Rani making a come back?

Meet back here same time next week with your box of tissues to bid farewell to the Ponds and thrill to the dangers of “The Angels Take Manhattan.”