Lots of fun and some HARRY POTTER cast members to liven things up! 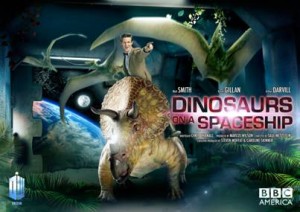 So after last week’s premiere of DOCTOR WHO, there are a lot of plot elements  left hanging in the air. This is typical of the more modern incarnation of WHO, where through lines are established in the first episode of a new series, and then carried until the end of that series, and sometimes beyond. But, now that we had a slightly darker and heavier hand in the “Asylum” it’s time to lighten things up a bit with a fun, somewhat frivolous episode “Dinosaurs on a Spaceship.”

Now, when I say that this is fun and frivolous; that’s just the surface of this episode. It also has elements of darkness and like most well written WHO, it strikes a balance between the two. For the main part of this story however, the Doctor (Matt Smith) recruits not only Amy (Karen Gillan) and Rory (Arthur Darvill) to help him explore a ship that is hurtling towards Earth, but also a big game hunter from the early 1900’s named Riddell (Rupert Graves) and Queen Nefertiti (Riann Steele) from Ancient Egypt. Plus in the deal the Doctor ends up with Rory’s dad Brian (Mark Williams) since the TARDIS materializes around him. This unlikely team of adventurers have to figure out the secrets to this ship with it’s cargo of dinosaurs before it is blown out the sky by an Earth protection unit, and they have to confront the one humanoid on board, Solomon (David Bradley)…along with his two pet robots.

So if you’re a HARRY POTTER fan this episode is for you! There’s two different POTTER cast alum in this one, and both are playing to their strengths and are absolutely charming and loathsome (respectively) additions to the WHO universe. Mark Williams is perfect as Rory’s dad, and I honestly can’t remember if we saw Rory’s parents at the end of Series 5 at the Pond’s wedding; so hopefully it’s not a hiccup in continuity. Plus I really like the fact that the costume designer outfitted Williams in a costume that looked almost identical to a typical Rory out fit with the plaid button down and puffy vest. Then Bradley creates a completely disgusting and unlikable character in Solomon, but he does it well, and he has really cool crutches.

WARNING THERE’S A BIT OF A SPOILER AHEAD.

I love that the ship is an ark sent out by the Silurians (Homo-Reptilia) before the asteroid hit that killed the dinosaurs. It’s another side of that race that we haven’t seen, and it’s a completely crazy and brilliant idea at the same time. So this ship got off of Earth before the Cybermen crashed the freighter in “Earthshock” into it and caused an extinction level event wiping out the dinosaurs…and you thought I didn’t have any WHO classic series references in me!

I love that the Doctor despite all of his fun in this episode, his exchanges with Nefertiti, his exchanges with the Ponds, and even riding on the back of a triceratops chasing a golf ball…that when it comes right down to it he gives someone a death sentence. Genocide is not something the Doctor looks upon kindly, and once he knows that Solomon jettisoned the entire crew of Silurian refuges and he is also willing to kill the dinosaurs with impunity; the Doctor simply allows him to be blown up. Clearly there is no redemption for that particular man. I like seeing Matt Smith play the wacky Doctor and the dark, somewhat vengeful Doctor in the same episode; it clearly shows the levels he has in his acting repertoire and how versatile he can be as the Doctor.

One small side note and I hesitate to say anything, but did anyone else notice that Karen Gillan’s face looked kind of odd in this episode? It almost looked like she had dental surgery or something because it seemed like she was having trouble moving her jaw very much. I love Karen and hate to even call attention to this, but does anyone out there know if something happened to her before they shot this episode? It sort of makes me think about when Billie Piper returned to the series right after she had dental work, and she was having trouble articulating.

Well next week is a western with a cyborg! Geronimo indeed!