TV Review: DOCTOR WHO – Series 7 – “Dinosaurs on a Spaceship” 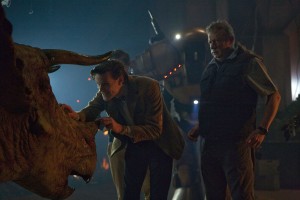 In the second episode of DOCTOR WHO Series 7, “Dinosaurs on a Spaceship,” the Doctor gathers a rather unique “gang” composed of Amy (Karen Gillan) and Rory (Arthur Darvill) ten months after their adventure in the Dalek asylum, Rory’s dad Brian (Mark Williams), Queen Nefertiti (Riann Steele) – yes, that one, and arrogant but capable game hunter Riddell (Rupert Graves). An ancient spacecraft of unknown origin is heading to Earth and the plan is to shoot it down, but not before the Doctor’s team goes on board to figure out what it is, why it seems to be populated by dinosaurs, and what dastardly presence (David Bradley) still lurks on the ship with answers about the craft’s history and the tragic fate of its original crew. Missiles from the Indian Space Agency are poised to shoot this relic of another era out of the sky…but our favorite Time Lord has another plan, if only he can think of one in time!

If you wanted to sum up the word “fun” in a modern DOCTOR WHO context, you probably couldn’t do it any better than to look at this episode. The light-heartedness of the episode’s early scenes also sets up a satisfying turn to darkness when the Doctor has to face down Solomon, Bradley’s evil trader that killed the original occupants of the ship and now threatens the Doctor’s friends…especially Nefertiti. The new series has rarely actually given the Doctor a truly loathsome single villain to face down. There’s been the Master, and Anthony Stewart Head’s Brother Lassar in “School Reunion,” and here the scenes between Smith and Bradley crackle with menace on both sides. The dark, gleeful way the Doctor consigns Solomon to a certain death may rankle some fans…but not this one. Solomon earned his fate by the genocide of the Silurians, the threatening of Nefertiti, and the cold-blooded murder of the nicest triceratops anyone could meet. The Doctor does seem to be at his most murderous when dealing with morally and ethically corrupt businessmen and opportunists; after all, he did plant a bomb on the Graff Vynda-K.

For old-school fans, the revelation that the ship was a Silurian Ark sent to populate a new world is a wonderful addition to Who history. So many Silurians went underground to avoid the catastrophe they believed was about to befall the Earth – quick lesson: it never happened, the approaching “meteor” became the Moon – that it makes perfect sense an advanced group tried another tactic, namely leaving the planet.

Amy is delightful here – which is rare – but besides showing strength without denigrating others and sharing some sly quips with Nefertiti, she also demonstrates the ability to become a surrogate Doctor when the occasion calls for it, and why not? As someone with years of TARDIS travel under her belt, it makes sense that she should be able to puzzle out quite a few things on her own, and her discovery of the crucial information concerning the ship’s fate is a great sequence that finally portrays her as the companion she should have been many episodes earlier. Better late than never maybe?

Darvill is superb as usual, Graves is great if a bit-underused as Riddell, Riann Steele is an irresistible vision as Nefertiti, and Mark Williams is so perfect a fit as Rory’s father it’s like they’re actually related. As for Smith, besides being as engaging as ever, he gets to show more of that dark side in his dealings with Solomon and channels more of his favorite Doctor, leaping across the beach pursued by pterodactyls and huffing just like second incarnation Patrick Troughton. Speaking of pterodactyls, did I hear a “KKLAK” in there? Maybe these sterling CGI dinos make up just a bit for the puppets in “Invasion of the Dinosaurs?” Let’s say they do.

While the entire guest cast is brilliant, the goofy robots are a little hard to take, but they are a pretty familiar double act from countless classic Who stories featuring similar characters. In fact, these bitchy ‘bots straight out of Douglas Adamsville are voiced by comedy duo Mitchell and Webb, making this the Hale and Pace “Survival” cameo of the modern era.

I could point out a few very minor missteps or lowbrow jokes that might fall a little flat, but it seems unimportant here. Some stories have tried unsuccessfully to capture the tone of a wild, joyful “romp,” yet this one accomplishes that task very well. With some rapid-fire witty dialogue that bears re-listening, excellent dinosaur effects and one amazing looking spaceship, a nice but humane JURASSIC PARK raptor attack homage, characterization accomplished well with a few facial expressions and a word or two (the Pond/Williams family dynamic in particular comes through strong and clear), a pace that never lets up, and a few genuinely satisfying emotional touches, “Dinosaurs on a Spaceship” is what Saturday family viewing is all about. And it ends with the poetic visual of Brian eating a sandwich and sitting on the edge of the TARDIS doorstep looking down at the sheer grandeur of Earth. It’s a silly, beautiful scene, just like DOCTOR WHO itself.

Next week, it’s gunfighters galore with a trip to the Old West. Saddle up!