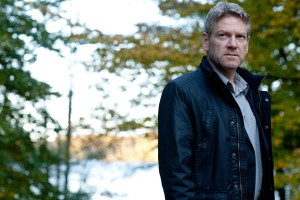 Kenneth Branagh is famous for a whole lot of things. He’s a noted adapter of the works of William Shakespeare for film, having produced, directed and starred in feature adaptations of HENRY V, MUCH ADO ABOUT NOTHING, HAMLET and AS YOU LIKE IT (all of which he’s also done on stage). He also directed last year’s summer blockbuster THOR and is currently embarked on directing and costarring in JACK RYAN, a reboot of the franchise with Chris Pine as the hero who’s already been played by Alec Baldwin, Harrison Ford and Ben Affleck.

Branagh is also active in the community both in England and in his native Northern Ireland. In April of this year, he was knighted by the Queen of England, an honor that clearly means a great deal to him but at the same time seems to have left him slightly incredulous. Asked how he’s adjusting to being addressed as “Sir Kenneth,” Branagh replies, “I’m not adjusting to it at all. It’s kind of thrilling to hear – you absolutely don’t have to use it.” He even suggests a few alternatives for those who insist on employing an honorific. “Dame Lovely, Baron Branagh …”

However, Branagh is at the PBS session for the Television Critics Association primarily to discuss the third season of WALLANDER (aka WALLANGER III). Based on the mystery novels by Sweidish writer Henning Mankell, Kurt Wallander is a police detective in a small, snowy Swedish town, where complicated murders keep occurring. Branagh is the star of the series, as well as one of its producers. WALLANDER’s third season ran in Britain this past summer; its three-movie run debuts tonight on PBS’s MASTERPIECE MYSTERY! at 9 PM with AN EVENT IN AUTUMN.

What does Branagh think is the difference between grim English detectives and grim Swedish detectives, as Wallander the character is a clear example of th3e latter?

“I think that my observations of the Swedish version, through Henning Mankell’s novels, are a certain kind of thoughtful and meditative detective,” says Branagh. “Certainly I can talk specifically about Kurt Wallander. I suppose the distinction for him is, I would say, his relative lack of vanity about his personal appearance. He doesn’t have the sort of machismo swagger so much. He’s male in certain possibly tediously predictable ways. He seems to live just for the job and to have a kind of empathy for the victims of a crime that is almost dangerous to him in the way that it’s emotionally debilitating, and he actually is distinct from other Swedish detectives. He’s a sort of twenty-four-seven kind of guy. In Sweden, mostly they go home at night. They like to stick to their own civilized hours. But I think he has fewer of the ticks – he doesn’t have the coat. He doesn’t have the toothpick. He doesn’t have the hat. He doesn’t have the weird obsession with cars. He’s unadorned in a way. The people back home [in theU.K.] got caught up with him wearing a parka [in Season 3] as a wild departure for Wallander, fashion-wise. But I think there’s a Swedish kind of purification about him. He’s just about feeling and trying to solve the crime, not necessarily the most efficient way to do it, but his way.”

The third-season opener actually marks a bit of an emotional change for Wallander – he’s in a relationship with Saskia Reeves’ character Vanja – which in turn prompted the aforementioned parka.

“I think there was a little attempt to change the wardrobe to a man who was aware that he was going home to someone and that he had to make a bit of an effort,” Branagh explains. “Now, you may not think a parka is a bit of an effort, but in terms of some of the other things he wore – and he has a nice scarf as well, nice color, nice texture. Might even be cashmere. Part of the same quality of trying to impress Vanja.”

Is there anything Branagh can say at present about the JACK RYAN movie?

“JACK RYAN is a film that I’m directing for Paramount, which is an origin story that allows us to understand how Jack Ryan, created [in novels by] Tom Clancy, develops into a CIA analyst,” he says. “So this is him before joining and perhaps even joining the CIA. It’s a contemporary action thriller.”

Will Branagh be bringing any more of his fellow WALLANDER actors to the big screen in JACK RYAN or other future directing projects? After all, Branagh cast Tom Hiddleston, who played Wallander’s colleague Magnus Martinsson in the first two seasons of WALLANDER, as the villain Loki in THOR.

“I don’t know,” Branagh replies. “In the end, you hope to work with talented people and if you happen to work with them before, that’s definitely an advantage. No specific plans, but I certainly like working with people who do a good job, so there could certainly be.

“I hope there will be more WALLANDER,” he notes. “If we went into a fourth series, which we hope to with three more films, they would probably include THE WHITE LIONESS, a book that has not been adapted before in any of the WALLANDER series, which is set in South Africa. And we would probably use the last novel, the ninth novel in the WALLANDER series, THE TROUBLED MAN, and we would make two films of that very dense book. I mentioned to Rebecca [Eaton, producer of the MASTERPIECE series for PBS] that Henning Mankell had said recently that he enjoyed the series so much that it made him want to write some more. So I don’t know. I feel our series has particularly taken its DNA from these novels. So if there are more of those, I’m sure we night think about it. For anyone who’s read THE TROUBLED MAN, there are challenges to more WALLANDER novels. So we’ll see, but I hope there are more to come, and I hope that MASTERPIECE will be there with us.”