The Doctor gets a new Stetson and a gun, but are we OK with that? 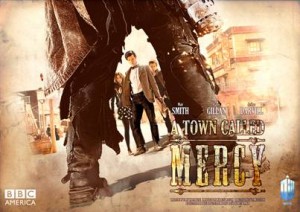 DOCTOR WHO returns to the Wild, Wild West with “A Town Called Mercy” this week, and this is a considerable step up from “The Gunfighters.” Sure the 1960’s adventure had famous western names to boast, but this new episode has a really nifty cyborg and some fun moments here and there, plus a new Stetson for the Doctor.

I realize as I am writing this review that Amy (Karen Gillan) and Rory (Arthur Darvill) have started to overstay their welcome with me. It’s always the same story, tagging along after the Doctor (Matt Smith); with Amy being domineering and getting into situations she probably shouldn’t. Then you have loveable, bumbling Rory who just seems clueless and caught up in events that he’s just along for the ride for the most part. Don’t get me wrong, I love the Ponds and I will be sad to see them go, but it seems like the WHO writers have fallen into a predictable pattern of what a person can and can not do with this married couple in any given story. Last series was all over the map with the Ponds, thanks largely in part to the River Song (Alex Kingston) storyline, but this series it’s just more of the same ho hum.

I love DOCTOR WHO, but does anyone else out there sit and watch episodes, see certain characters, and think “action figure” or “playset” or “boxed set”? I can’t help myself! Take this episode for example; from the very first few minutes of seeing The Gunslinger (Andrew Brooke) I immediately thought, “OOOOOO that will be a really nifty toy!”

Speaking of the cyborg Gunslinger, I thought the design was quite top notch. He looks like something that has been haphazardly put together during a war, and he’s also got elements of FRANKENSTIEN about him. Plus, the fact that he is haunting this town, waiting to kill his creator for turning him into a monster is straight out of Mary Shelley.

Again with this episode we are faced with the darker Doctor who is willing to kill to save others. I commented on this in the last episode, but this time it is even more overt and we have the Doctor waving a gun in Kahler-Jex’s (Adrian Scarborough) face to keep him from crossing back into Mercy. When did the Doctor get so comfortable with guns? Anyone else remember the strong anti-gun sentiments of “The Doctor’s Daughter” back during the 10th Doctor’s (David Tennant) run? I’m not sure I buy into the Doctor going back on his own beliefs just because he’s been travelling alone again for too long.

Which also reminds me to ask, exactly how old is the Doctor at this point? Clearly, without a normal day-in and day-out companion, we are missing seeing just how the Doctor is aging, but in this episode he claims that he is twelve hundred years old. That would put him about another 100 years older than the end of the last series. Is Steven Moffat purposely aging the Doctor to get to a certain year for the 50th? Or are we leaving huge gaps in the Doctor’s documented timeline so that they can return to them at a later date and time?

Next episode is once again about the Ponds, but this time it’s from their point of view. This should be interesting. Oh yeah, and Rory’s dad returns as well!