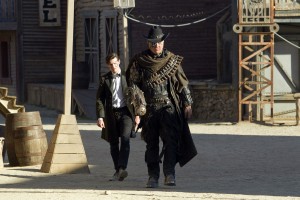 In the third episode of DOCTOR WHO Series 7, “A Town Called Mercy,” the Doctor (Matt Smith), Amy (Karen Gillan), and Rory (Arthur Darvill) visit a dusty little town just a few years after the end of the Civil War. Isaac (Ben Browder), the local Marshal, is protecting a kindly alien doctor named Kahler-Jex (Adrian Scarborough) from a cyborg Gunslinger that has virtually imprisoned the entire population of the town until they deliver his prey. When the Doctor uncovers Jex’s dark past, he finds himself pushed to the limits of his anger, and must fight not only to protect the town of Mercy, but the mercy that may be at risk within his own soul.

Three for three so far this year as DOCTOR WHO delivers another cracking good standalone tale with beautiful settings, some truly artful, sun-drenched direction from Saul Metztein that evokes so much of the genre to which it pays homage while never parodying the source material (the same can be said of the writing and performances too), and a deeper exploration of the Doctor’s character as well as the ways in which good and evil can often dwell simultaneously in a single individual. There are some great lessons here about taking responsibility for one’s actions and wielding weapons with concern for the damage they can cause, and sparkling dialogue that sums up many of the story’s themes while never seeming heavy-handed about any of it. Murray Gold also knocks it out of the park, infusing the musical score with banjo and other sounds that perfectly suit the place and time. The whole episode is a mini-Western movie with the Doctor caught in the middle; great Saturday family viewing stuff.

If I sound relieved these last few weeks in these reviews, it’s only because the show seems to have learned a lesson from last year and rediscovered the sense of fun that was sorely lacking and has now returned with a vengeance. There are also pop culture references galore, not all of them necessarily intentional, from a bit of HIGH PLAINS DRIFTER with the Gunfighter’s ghostly arrival to the somewhat laughable egg-like design of Jex’s ship. So where’s Orson from MORK & MINDY when you need him?

Amy and Rory are largely superfluous to requirements, which happens from time to time but sure does seem a shame when they only have a few appearances left. Amy’s speech bringing the Doctor back from the brink at least justifies her being there, but I could see Isaac doing the same with just as much effectiveness, even given the long-term relationship Amy and the Doctor share. Still, it’s a small point in what is otherwise an excellent episode. There are so many satisfying shades of gray on all sides here, from townsfolk that want to lynch Jex but see the saner side of the argument, to Jex’s genuine remorse for what he did, and even the Gunslinger’s strict code of honor and acknowledgement that in the end, Jex may have been the better man.

While much of the tormented Time War Doctor of the previous era was jettisoned when Matt Smith’s incarnation took over – and no problem there, it was time to move on – it is also nice to see something of that darker side back again as he struggles with the dilemma posted by Kahler-Jex and his would-be executioner, going so far as to point a gun in Jex’s direction and forcing Amy to arm herself in response. In fact, it also harkens back to some of Fourth Doctor Tom Baker’s finer moments, raging against the moral and ethical violations of scientists that fail to take responsibility for their actions. In this case, however, Jex proves the often-sanctimonious Time Lord quite wrong when he does in fact choose how and when his debt will be paid. After all, America is a land of second chances.

FARSCAPE fans might have been awaiting Ben Browder’s appearance in this episode, and although he’s very good as Isaac, he doesn’t get all that much to do and exits the story about midway through. He does get one of the many great lines, pointing out that both the Doctor and Jex are good men that forget sometimes. There are similarly quotable lines every minute or so, which puts Whithouse up there with fellow WHO writer Chris Chibnall when it comes to snappy and meaningful dialogue.

Long-time fans may know the oft-heard tale of “The Gunfighters,” the First Doctor (William Hartnell) story from 1966 that has frequently been criticized as one of the worst classic WHO stories ever and the series’ only previous foray into the American Old West. For one thing, it’s not bad at all; in fact, it’s rather fun. For another, its reputation – unwarranted though it may be – did probably have a lot to do with DOCTOR WHO not venturing near the genre again for anything substantial until right here and now. Fortunately, it was worth the wait. But wouldn’t it have been nice if the “Ballad of the Last Chance Saloon” was playing when the Doctor first walked in the door?

Next week, the slow invasion begins and black boxes are everywhere you look. It’s time for the Power of Three to save the day. No, they haven’t scheduled an old episode of CHARMED by mistake…as far as we know.