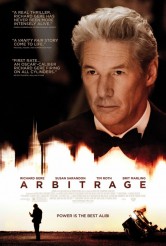 A Wall Street/crime thriller with some intriguing twists

ARBITRAGE the movie takes its title from the term for a type of risk-free financial transaction. When we meet Wall Street tycoon Robert Miller (Richard Gere), it quickly becomes evident that he hasn’t managed to make such an exchange go smoothly, but he’s anxious to sell his company before anyone finds out the extent of the damage to the tune of six hundred million dollars (give or take).

Robert’s problems include his adored and adoring daughter Brooke (Brit Marling), chief financial officer of his company who is inadvertently honing in on the truth, and an elusive buyer (Graydon Carter) who keeps sending surrogates to delay the purchase for mysterious reasons.

This seems like it should be enough trouble for any one person to have, but then a crime occurs, and shortly thereafter,  very dogged, if possibly unscrupulous, NYPD detective Bryer (Tim Roth) shows up, wanting to go straight for Robert’s throat.

The elements in writer/director Nicholas Jarecki’s tale aren’t unfamiliar, but he combines and stirs them in ways that are new. He and actor Gere certainly make a good case for how Robert’s attitude toward business has infiltrated every other aspect of his life, even though he sees himself as a principled man and can come up with a multitude of justifications. Likewise, Roth’s scrappy Bryer has a point of view that comes with a modicum of validity. The two characters are worthy opponents.

The surprises come mostly in the form of who else is swept up in the situation and how things play out. One of the strengths in Jarecki’s writing is that he’s able to show us, without being didactic, the sorts of colossal financial shenanigans that have cost theU.S.and the rest of the world so dearly. At the same time, he makes us believe in the breathtaking tunnel vision of the people responsible.

Gere has played versions of this character before, but he does it so well that it’s no wonder that filmmakers come to him when there’s a new variation they want him to enact. He’s got charm to spare, the scary fury of the truly entitled and the kind of inner life that prevents us from hating him. Susan Sarandon has enormous power as Robert’s very intelligent wife. Roth allows himself to be amusingly scruffy without losing sight of Bryer’s focus and Nate Parker is impressive as a young acquaintance who Robert turns to for help.

ARBITRAGE is unlikely to become a blockbuster, but it is clever, keeps us guessing and, in its credible depiction of the world of high finance, is more than a little chilling.