dancing with the stars interview 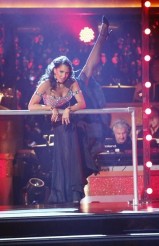 The returning contestant also talks about her time on THE BACHELOR 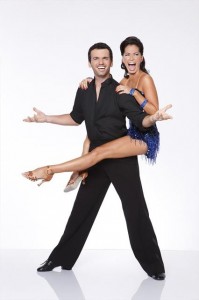 DANCING WITH THE STARS: ALL-STARS, airing on ABC Monday and Tuesday nights, has brought together thirteen fan favorites from past seasons to compete again for the mirror ball trophy. (As of this writing, two of the stars has already been eliminated from the competition.)

We caught up with Melissa Rycroft, a DWTS veteran from 2009 – as well as a 2009 participant in THE BACHELOR – to talk about her return spin on the DANCING floor.

ASSIGNMENT X: Can you talk about doing reality TV overall?

MELISSA RYCROFT: Reality TV has a hundred percent changed my life. I do think it’s funny that sometimes people want to shy away from that, they’re embarrassed by it. And I feel like I should own it, because, you know what, it did get me here. BACHELOR was a stepping stone, DANCING got me into a career where I did get to experience other things, but I’m not one to say I would never do reality TV again, because it is a big part of who I am and where I am, and it’s a big part of today’s culture, to be honest.

AX: Did you have any concerns about returning to DANCING WITH THE STARS?

RYCROFT: No, I don’t think anything these days is handed to anybody. There is some reason – we [the returning contestants] weren’t petitioning to get on. People wanted us and that’s how that happened. And this industry is silly. If you go away for too long, opportunities go away. Sometimes there’s a person that fits into a certain niche and you either run with that and take it, or say, “I don’t want to be a part of that and I want to try something else,” but it is hard. My life’s very different from the last time I did this show, it’s pretty much different from any time I’ve done reality TV before. And I’m interested to see what’s going to happen this time around.

AX: Does being the mother of a young child this time around make any difference?

RYCROFT: Well, it’s very different. I don’t know if I’ll be lighter on my feet [laughs] – one of the biggest challenges that came was, do we move the whole family back out to L.A. I don’t get to make the selfish decision of, “Let me invest a hundred percent.” I’ve got a baby that I’ve got to think about. Coming out here and practicing – I don’t think I’m going to want to practice twelve hours a day like I did before because I’ve got her, but the thing that we [the contestants] were bonding, everybody’s in the same boat this time around. Whether we had kids before or not, we’re all right there, and they’re all about the same age, so maybe they can start a baby DANCING WITH THE STARS: ALL-STARS play group or something.

AX: Were there instances in your past seasons where you ever felt any of the judges were a little discouraging? If so, are you worried about facing them again?

RYCROFT: I always remember my very first dance, the one where I only had two days of practice, and I had gone out and Carrie Ann [Inaba’s] critique was, “There’s just something missing.” And I remember, I walked away from that and went, “That doesn’t help me at all.” And I think of all the judges, I had the most to prove to Carrie Ann in my season, and she’s probably the one that I’m going to try to win over. I don’t think I ever really hundred percent won her over my first time. 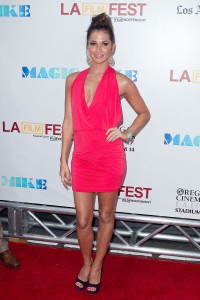 AX: Obviously, it’s a very intense competition, but is there any one competitor you’re particularly concerned about?

RYCROFT: Well, let’s see. I’ve already lost to two of the contestants, so I’m obviously worried about them. You know, I’m really interested, because there are people we haven’t seen in a long time [on the show] – Kelly [Monaco], we haven’t seen Drew [Lachey], Kirstie [Alley], even. I’m anxious to see what they’ve got, because it’s been a long time, but I bet you they’re going to come out with certain fire that’s going to surprise us newbies – if you can even call us newbies three years out [laughs]. I’m excited.

AX: You’re back with your original partner Tony Dovolani. Were you worried you might be paired with someone else and had to go up against him?

RYCROFT: Yeah. You know, I have a special place in my heart for Tony, because we did it together and we developed this great friendship and there is something intimidating in going, “God, what if I get somebody new and I have to redevelop that relationship?” And to go against him – I don’t know.

AX: Do you have a preference for this type of reality show, where you’re showing off skills, versus the type where …

RYCROFT: Where we’re competing for boys? [laughs] If I’ve learned anything in all the years that I have done this, it’s you have to own who you are and what you say. And there are shows that want to focus more on your personality and things you may or may not have said, but you are who you are, and deliver it and own it, and nobody can then skew the way the public views you, if that makes any sense. So I don’t shy away from those types of shows, if you will – I just kind of say it’s who I am and let’s just go out and own it.

AX: So you don’t have a preference?

RYCROFT: No.  For me, it did work out. I had to go through everything I went through to make it work out, and therefore I wouldn’t regret any of it, but I think a big thing is, you own it. I think what we all saw on THE BACHELOR was one of the most embarrassing things of my life. It’s hard not to look at that and go, “Oh, man …” And things I wish I had said, a punch maybe I wish I was going to throw … [laughs] But you own it. And by owning embarrassing stuff, humiliating stuff, bad decisions, you have people around going, “You know what? I’ve done that too and I’ll get there,” as opposed to trying to put on a façade that everything is always perfect. Because it’s not. It never is.

Article Source: Assignment X
Article: Interview with Melissa Rycroft on DANCING WITH THE STARS: ALL-STARS and THE BACHELOR