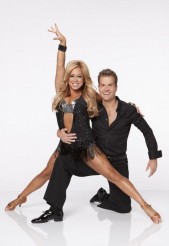 Some stars fail, other rise on DWTS: ALL-STARS

It’s already obvious that the judges have favorites this season on DANCING WITH THE STARS: ALL STARS. And why shouldn’t they? They know ALL of the contestants. They know their weaknesses and their strengths, which is probably why they are judging them far stricter than they have in the past.

However, lets not forget, they aren’t dancers so is that fair? In some cases, maybe. A lot of the time, though, it seemed they were being nit picky. Many of the performances seemed dead on and received only a 7.5 or occasionally an 8. Some comments I agreed with, others, I didn’t know what the heck they were talking about. Case in point – Drew Lachey & Anna Trebunskaya. He kicked butt on the dance floor only to receive 7.5s all around.

Then Joey Fatone & Kym Johnson came out and seemingly disappointed the judges and he too received all 7.5s. Huh? What was not surprising is Sabrina Bryan & partner Louis Van Amstel led the pack this week with an impressive 26. Right behind them is Gilles Marini & Peta Murgatroyd with a very good score of 25.5. Tonight there is no doubt in my mind that either Bryan or Marini should win this whole thing. They deserve it more than anyone else does.

For starters, let’s eliminate all the previous winners. Sorry, Apolo Anton Ohno & Karina Smirnoff (24.5) and Helio Castroneves & Chelsie Hightower (23), it’s not your turn! Never mind arrogant Emmitt Smith & Cheryl Burke (22.5), you had your day! Shawn Johnson with Derek Hough, who placed third tonight, already edged out Marini with the lowest percentage in the history of the show last time around when she danced with Mark Ballas who is now dancing with Bristal Palin (18). And as much as I think Lachey got screwed over this week by the judges, he does not deserve to win.

Non-winners Melissa Rycroft & Tony Dovolani also did well and might have a good chance at the mirror ball (23.5). Kelly Monaco & her partner Val Chmerkovskiy (22) (something’s going on there, definitely) did fine but she’s won before too. Then there’s Kirstie Alley & Maks Chmerkovskiy. What can I say? She is good but not good enough in THIS competition and yet I’d rather see her win than ANY previous winner. So there you have it. Winners step aside and let someone else take the trophy. Don’t be greedy! Besides what are you going to do with two …bookends?

Drew Lachey (singer) and his partner Anna Trebunskaya
He is a strong competitor. Len Goodman told him to get on the balls of his feet. Carrie Ann Inaba welcomed him home. Bruno Tonioli said he was rough and ready for his Jive.
Scores: Inaba – 7.5, Goodman – 7.5, Tonioli – 7.5, Harland – 8

Melissa Rycroft (TV reality star) and her partner Tony Dovolani
She looks like a cheerleader! Goodman said she had great technique. Tonioli thought her Jive was one of the fastest he’d ever seen. Inaba said she was made to Jive.
Scores: Inaba – 8, Goodman – 8, Tonioli – 7.5, Harland – 8

Helio Castroneves (racecar driver) and his partner Chelsie Hightower
He always looks like he’s having fun. Inaba said he was on it. Goodman said he had style with a smile during his Jive. Tonioli called his dance a delicious treat.
Scores: Inaba – 8, Goodman – 7.5, Tonioli – 7.5, Harland – 8

Kelly Monaco (actress) and her partner Val Chmerkovskiy
She is so much better a dancer this season than her first season. Goodman said her spins were terrific. Inaba told her to watch her lines. Tonioli thought her Quickstep was very pretty.
Scores: Inaba – 7.5, Goodman – 7, Tonioli – 7.5, Harland – 7.5

Emmitt Smith (Ex-NFL’er) and his partner Cheryl Burke
Cocky doesn’t get you too far in this competition…last week he was much better. Goodman called him smooth. Inaba told him to up his game. Tonioli said he has red hot chemistry.
Scores: Inaba – 7.5, Goodman – 7.5, Tonioli – 7.5, Harland – 7.5

Bristol Palin (TV reality star) and her partner Mark Ballas
She lost it a bit. Tonioli wanted more hold in her Quickstep. Inaba said she came so far. Goodman liked the fun she was having.
Scores: Inaba – 6, Goodman – 6, Tonioli – 6, Harland – 6.5

Who’s going home: I say Smith & Burke, but that’s not likely. Maybe Monaco & Chmerkovskiy. Or could Palin’s fan base be dissipating?

Who Has Legs To Take Home The Mirror Ball: Marini & Murgatroyd or Bryan & Van Amstel!