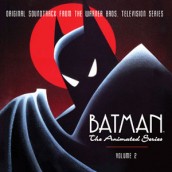 Shirley Walker was a woman who shattered the stereotype that no female composer could assume the musical costume of a male superhero, let alone a major Hollywood action score. Walker’s dynamic orchestral sound proved them wrong from THE FLASH to TURBULENCE. But if there’s one identity that she’ll likely be remembered for assuming, then it’s the darkly heroic music of the animated Batman, a lavish, film noir sound that embodied the WB network’s retro vision of the Caped Crusader, one that many fans still view as the finest representation of their DC icon.

Walker’s work wasn’t simply “cartoon” music that leaped with carefree abandon across dozens of 30 minute episodes, but a succession of mini-movie scores, each cohesively linked to the other with recurring themes and a rousing sense of melody. She’d also expertly capture each episode’s tone, whether it be Indiana Jones-like adventure, satirical Saturday matinee thrills or a delicious throwback to Neil Hefti’s swinging 60’s jazz for Adam West’s live action Bat cartoon.

Walker’s musical arch becomes even more apparent now that La La Land has followed up their first two-CD volume of her B-TAS scores (thankfully back in circulation) with a four-disc set that collects over five hours of Walker’s best work. Arranged into suites, the second volume’s numerous classic highlights range from Mr. Freeze’s tragic tenderness in “Heart of Ice” and the malleable psychosis of Clayface in “Feet of Clay” to sweeping Lawrence of Arabia adventure (via Ra’s Al Ghul) in “The Demon’s Quest” and the theatrical villainy of “Fire From Olympus.” Rarely have characters been so well personified in animated music, from the Joker’s maniacal tune to Batman’s Wagnerian motif. The breadth of her accomplishment is more astounding than ever through this collection’s well-chosen suites (completed by often jazzy “source” tunes), with John Takis’ exceptional liner notes detailing the approach of Walker and her own musical crusaders in creating a scoring scope that’s as lavishly impressive as any flesh and blood-ed representation of Bruce Wayne’s alter ego.

Click on Link: To Purchase The BATMAN: THE ANIMATED SERIES soundtrack