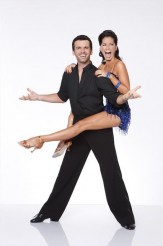 DANCING WITH THE STARS: ALL-STARS Season 15 Recap: Rycroft and Bryan dance to the top

DANCING WITH THE STARS: ALL-STARS  is truly a whole new kind of dance off! The caliber of dances tonight were off the charts good! I mean season finale good! Trying to juice up the show, the producers allowed the stars to choreograph the dances tonight as the creative directors of their and their partner’s moves. It worked smashingly! Most of the stars embraced the idea of being in control and it wildly benefited them all. Leading the pack tonight was a tie between Melissa Rycroft & Tony Dovolani and Kelly Monaco & Val Chmerkovskiy, each scoring a 27. Right on their tails were Shawn Johnson & Derek Hough with a spectacular Quickstep that the judges called the best dance they’ve ever seen on any of the 15 shows. But, because they broke some of the rules their score reflected that with a still not too shabby 26.5.

Then in an amazing four-way tie were Helio Castroneves & Chelsie Hightower, Gilles Marini & Peta Murgatroyd, Apolo Anton Ohno & Karina Smirnoff, and Sabrina Bryan & Louis Van Amstel with 25.5. Emmitt Smith & Cheryl Burke received a 25 while Kirstie Alley & Maks Chmerkovskiy and Drew Lachey & Anna Trebunskaya each scored a 24. Rounding the 11 contestants out was Bristol Palin & Mark Ballas with a 22.5. It’s painfully obvious from looking at the scores that some duos are allowed more flexibility than others.

And for some reason it seems the judges are gunning for Lachey & Trebunskaya’s exit. They opened the show with a show stopping, fully energized crowd pleaser and yet they were only given decent numbers. Even Lachey looked surprised at their under enthusiasm. What gives? He knocked the socks off the audience and yet he ended up tied for second to last? Clearly they want him gone and if they have their way Palin & Ballas will also be joining them tomorrow night for the double elimination.

Drew Lachey (singer) and his partner Anna Trebunskaya
This is the hottest number he has ever done! Len Goodman thought his Cha Cha Cha was terrific. Carrie Ann Inaba said it was tight and precise. Bruno Tonioli called him Magic Mike!
Scores: Inaba – 8, Goodman – 8, Tonioli – 8, Harland – 8.5

Helio Castroneves (racecar driver) and his partner Chelsie Hightower
He slipped on her dress but no one does pin stripes quite like Helio! Goodman called his Quickstep top notch. Tonioli said it started with a blast. Inaba was bummed about the dress but happy about the dance.
Scores: Inaba – 8.5, Goodman – 8.5, Tonioli – 8.5, Harland – 8.5

Apolo Anton Ohno (Olympic speed skater) and his partner Karina Smirnoff
He proved he too can be sexy! Goodman said he had great musicality in his Foxtrot. Inaba thought it was absolutely stunning. Tonioli called it classy.
Scores: Inaba – 9, Goodman – 8, Tonioli – 8.5, Harland – 9

Shawn Johnson (Olympic gymnast) and her partner Derek Hough
Spectacular! Goodman loved it but pointed out that they did in fact break some rules. Tonioli called them the Incredibles! Inaba said they gave her happy feet while dancing the Quickstep.
Scores: Inaba – 9, Goodman – 8, Tonioli – 9.5, Harland – 9

Sabrina Bryan (actress) and her partner Louis Van Amstel
Nailed it! Goodman said her Paso Doble was full of risks. Tonioli said it was full of maximum fire power. Inaba was a little disappointed saying there was nothing new about it.
Scores: Inaba – 8.5, Goodman – 8.5, Tonioli – 8.5, Harland – 9

Kirstie Alley (actress) and her partner Maksim Chmerkovskiy
Fun! Fun! Fun! Goodman said she had the whole package. Inaba said the Cha Cha Cha was her best dance ever. Tonioli said it was the most fun he’s had yet!
Scores: Inaba – 8, Goodman – 8, Tonioli – 8, Harland – 8

Gilles Marini (actor) and his partner Peta Murgatroyd
Sex in the ballroom! Goodman said he performed the Tango soooo well. Inaba said he is good at the drama. Tonioli called him 50 Shades of Gilles!
Scores: Inaba – 8.5, Goodman – 8.5, Tonioli – 8.5, Harland – 8.5

Who’s going home: I think the judges are gunning for Lachey and maybe Palin.

Who Has Legs To Take Home The Mirror Ball: Hmmmm… Rycroft & Dovolani or Bryan & Van Amstel!

UPDATED: TV Review: DANCING WITH THE STARS: ALL-STARS – Season 15 – Week 3 – Drew Lachey and Helio Castroneves are kicked off in a double elimination