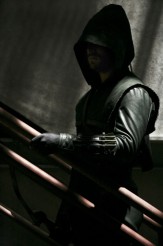 Working outside the law, Oliver Queen tries to stop the execution of a man wrongly convicted of murder.

Is vigilante justice ever a bad thing?  In the world of ARROW the answer to that question is, unambiguously, “No.”  Despite Detective Quentin Lance (Paul Blackthorne) complaining incessantly about the dangers of the mysterious hooded vigilante, (whom no one in the series has yet addressed as either “Arrow” or “The Green Arrow”), this vigilante has so far never targeted the wrong person, nor done any collateral damage to Starling City.  Oliver Queen, (Stephen Amell), has a list of names given to him by his late father, and if you’re on it, you’re a murderer and he’s coming after you.   No ifs, ands or buts.

In this week’s episode, “An Innocent Man,” Oliver deduces that a man convicted of his wife’s murder has been framed, simply because the dead wife’s boss was one of the names on his list.  Oliver doesn’t actually investigate this connection and just plows ahead as though he’s got all the evidence he needs, determined to see the boss brought to justice and the obviously innocent man freed.  In the world of ARROW, Oliver is of course, correct, and the boss is actually the real killer.  Don’t believe it?  Well, ARROW, gives us a clumsy flashback scene early on, from the point of view of no one in particular, that shows the boss talking about the killing and the frame-up, just to remove any doubt.  So rest assured, our vigilante is totally justified in shooting an arrow into the boss’s hand as part of an interrogation later on.  And Oliver’s ex-girlfriend, Laurel Lance (Katie Cassidy), a virtuous defense lawyer, is also justified in abandoning her deeply held ideals about the rule of law in order to help the hooded vigilante obtain justice through extra-legal means for the man who’s been wrongly convicted.

Given the nature of the circumstances presented, I suppose the characters’ actions all make sense.  But it really wouldn’t kill ARROW to present us with a more sophisticated set of circumstances than this.   If the vigilante is always correct, then the characters who criticize his actions become one-dimensional killjoys, and not much fun to spend time with.

And while I’d be more interested in a show that better explores the grey areas of vigilante justice instead of only paying lip service to them, I’m willing to grant ARROW some leeway because it’s a comic book adaptation about a superhero, and making the core of its story a black-and-white struggle between good and evil is pretty much par for the course in that world.  But if Oliver is going to be fighting absolute evil, and if breaking the law using archery is a justified part of that fight in every instance, I’d like it a lot more if the evil he was fighting was actually interesting.  Every person on Oliver’s list so far is a fairly generic white-collar criminal (who’ll kill you if you discover their illegal toxic waste dump).  These aren’t exactly super villains.  Hopefully the actual conspiracy that links all the people on Oliver’s list provides a whole that’s greater than the sum of its parts, because without a credible over-arching threat to Oliver besides losing his girlfriend and getting arrested, the show seems to be spinning its wheels.  For as much as ARROW resembles Batman with a slightly different color scheme and fictional city name, it still really needs a Joker.