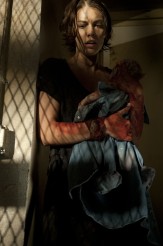 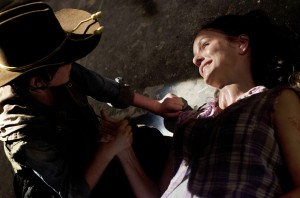 In the fourth episode of THE WALKING DEAD Season 3, “Killer Within,” the Governor (David Morrissey) deals with Michonne’s (Danai Gurira) suspicion, Merle’s (Michael Rooker) desire to find his brother, and Andrea’s (Laurie Holden) slowly growing appreciation for Woodbury, which may drive a wedge between her and Michonne. Meanwhile, back at the prison, Rick’s (Andrew Lincoln) group contends with a sudden influx of zombies. Someone has turned on the alarms to ring the dinner bell for the undead, but who did it? And can they get things back under control before they lose anyone? Regardless of where the Walkers roam, two members of Rick’s group are about to face life-threatening choices…

This review was going to focus on a lot of other aspects of this episode in more detail until I arrived at the final act and received the well-placed, impossible-to-predict emotional punch to the stomach that was Lori’s (Sarah Wayne Callies) death. Everything else in this installment – and there’s so much good material – pales in comparison to that sequence in which Lori demands that Maggie (Lauren Cohan) and Carl (Chandler Riggs) cut her open to save her baby when she goes into labor in the midst of a prison zombie siege. From the moment it becomes clear that the episode is going to go all the way, to Lincoln’s heart-wrenching final scene where he quite literally collapses in abject grief, it’s impossible – I dare you – to remain dry-eyed and keep the screen in focus.

I’ve been an outspoken critic of Lori’s characterization in Season Two and often joked about looking forward to her fate paralleling that of her comic book alter ego, but here the show once again proves it intends to use the elements of the comic while veering far off the map when it suits them. In this case, the shocking death of Lori is so unexpected given knowledge of the comic book source that it is perhaps even more powerful than for those watching the show with no awareness of the original story. I’ve been saying that the writers and Callies have done a wonderful job these last few weeks of rehabilitating Lori and bringing her back to someone we could truly begin to care for again…but now we see they did that knowing they were about to hit one of the show’s most incredible emotional beats to date, and about a year earlier than the comic’s “prison arc” would ever have suggested. While it was painful to watch, it was also written, performed, and shot with a dark beauty that is a credit to all involved.

Lori’s speech to Carl goes so much farther to redeeming her character at last and is a beautiful statement on doing the right thing as well as articulating a mother’s love for her first-born son in a way that rings so true (based in part on show runner Glen Mazzara’s own recent loss of his mother). A well-timed flashback punctuates the moment that Carl takes it upon himself to shoot Lori and prevent her from returning, sending him further down a very dark road from which there may be no returning…unless that budding interest in Beth (Emily Kinney) provides some measure of solace.

It is devastating beyond belief watching Rick’s grief, which is so real, so painful, and carries so much additional weight considering the unresolved relationship with his wife. There was a tentative resolution with a nod earlier in the episode, perhaps that one touch intended to provide the extra stab in the gut when Lori’s death arrived, especially since that last slight acknowledgement of the potential to heal their love happened at a distance with gates between them, with no chance for a proper farewell.

Are there ways out of this one, however? Well, theories abound despite post-episode coverage and interviews suggesting that Callies has indeed left the show. Could this all be a smokescreen? Could Lori be saved by Carol (Melissa Suzanne McBride) and survive after all, could Carl not have had what it took to pull the trigger, leading to a horrific return of a reanimated Lori at this year’s mid-season cliffhanger, Sophia-style? Or is this all grasping at straws? Perhaps the real power of this episode is best preserved by leaving everything just as it seems. We’ll see.

And Lori isn’t even the only one. There’s a palpable and almost comical sense of irony in the fact that T-Dog (IronE Singleton) finally gets something to do – inheriting Dale’s unworkable moral approach and arguing for including the two convicts in the group, something everyone else agrees is bad news – only to get bitten by a Walker in a later battle and leave the show just like his elderly predecessor. If there’s a theme here – this world (and show) doesn’t let the unconditionally compassionate survive long – it also represents a bit of a failure that they never really found a way to make this character more meaningful despite his long association with the series.

As for happenings at Woodbury, Michonne at last comes alive in this one with an electric scene in which she and the Governor dance around the truth about what happened to the military convoy last week. While Andrea falls under his spell in a way that initially I thought was a bit convenient and moronic on her part, it does make sense with closer scrutiny. Andrea is still the woman that lost her sister, became suicidal, and struggled to find a way to belong only to be cut loose by the group that had become her surrogate family. She has a reason to turn against them now and a reason to buy into anything the Governor – sorry, “Philip” – wants to sell her. But of course, we know this is not going to end well.

Interestingly, Merle looks like he may have his own issues with the Governor, and his conversation with Andrea makes me wonder how his position in this story will play out when all is said and done. You can’t exactly redeem a hateful bigot like him – they’ve done quite a job doing that with Daryl, but his youth and underlying nobility helps – but perhaps Merle might even become an unwitting ally against the Governor when things go bad? Food (heh) for thought.

From Hershel’s (Scott Wilson) excellent use of crutches in a clinch to the moment when Rick discovers that not all prisoners lack honor (or a good aim), this episode was filled with high points, and then all of them were washed away by the stunning finale. And now, just as we’ve seen Rick build up his leadership, everything comes crashing down when he’s about to face the challenge of the Governor. Bad timing…but great for dramatic television and its audience.

As for next week…oh watch the preview, I’m still reeling. Lori, I’m sorry I wanted you dead.