Oliver Queen has a plan to escape prosecution for his actions as the hooded vigilante, and Laurel Lance is shocked to learn something of the horrors Oliver endured while stranded on the dangerous island. 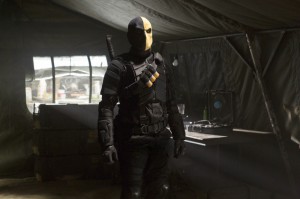 Just when I was starting to get down on ARROW,  “Damaged” put things back on track. By emphasizing some of the show’s more interesting storylines and de-emphasizing it’s lesser elements, (i.e. tepid warehouse fight scenes with generic, disposable bad guys), ARROW has lived up to a lot more of its early potential this week.

When we last saw Oliver Queen (Stephen Amell) he was being arrested for crimes committed by the green-hooded vigilante, (who I’d love to be able to refer to as “Arrow” for simplicity’s sake, but the show won’t let me yet).  These are crimes he totally committed, by the way, and Oliver has his reasons for committing them, but keeping his identity secret from the police, led by crusading Detective Quentin Lance (Paul Blackthorne), who blames Oliver for his daughter’s death, is essential to keeping Oliver’s family safe. Oliver seems unperturbed by the latest threat to his vigilante career, however, and in a nice turn he requests to have Laurel Lance (Katie Cassidy), his estranged girlfriend, and Quentin’s surviving daughter, serve as his defense attorney.

Laurel believes that Oliver’s public persona as a narcissistic playboy reflects his true self, and can’t believe Oliver is actually the vigilante, (despite the fact that she’s stood ten feet from the hooded vigilante, and knows that he’s the same height, build and race as Oliver, with roughly the same voice, and that Oliver has a body like a gymnast that also suggests maybe he’d have a bright future in crime-fighting if he ever wanted to get into it).   In any event, Laurel believes in his innocence, and succeeds in getting Oliver transferred to house arrest with an ankle bracelet pending trial.  Oliver, playing up his preening party boy image, then decides to throw a lavish party at the Queen mansion to celebrate the sheer absurdity of his being suspected of these crimes.

Of course, this is all part of Oliver’s secret plan to establish an alibi for himself.  Now that he’s enlisted his former bodyguard John Diggle (David Ramsey) to assist in his quest to rid Starling City of crime, he can ask Diggle to don the robin hood outfit and go after an arms dealer who’s threatening to sell military equipment to street gangs, while Oliver parties it up with hundreds of witnesses while under electronic surveillance.  Once the vigilante resurfaces somewhere else at the same time, Oliver won’t be a suspect anymore.  But playing the uber-confident jackass backfires on Oliver when he also agrees to offer Detective Lance a polygraph test to establish his innocence, and the Detective uses the opportunity to vigorously question Oliver about what happened to him on the mysterious island, where he’d been stranded for five years prior to returning to Starling City.

The flashbacks to Oliver’s experiences on the island have been the most exciting parts of ARROW thus far, and “Damaged” continues that trend.  After a younger, softer Oliver is captured by a paramilitary gang, he’s questioned by their leader, Edward Fyres, (Sebastian Dunn), who finally (finally!) gives us a cold, calculating villain who seems good at villainy.  When Oliver refuses to give Fyres the information he wants, (the whereabouts of Oliver’s island benefactor Yao Fei, played by Byron Mann), Fyres makes Oliver pay for it. “Deathstroke” (Jeffrey C. Robinson), Fyres’s mute, masked, scary enforcer, (and an actual comic book super villain if ever there was one), performs some PG-rated knife torture on younger Oliver, and back in the polygraph-ed present, Oliver is forced to explain, in front of Laurel, that this torture was the source of the scars now found all over his body.  Letting Oliver’s mask of shallowness slip in front of his love interest like this is a nice moment for the show, and leaving the fates of Fyres and Deathstroke unresolved means we can look forward to them being intimidating again in future episodes.

“Damaged” harps extensively on the dangers that Oliver’s vigilante career, and the lies that are required to sustain it, bring to his loved ones.  Among it’s other positives: it also gives us a little bit more detail on the criminal conspiracy that Oliver’s mother Moira (Susanna Thompson) appears to be wrapped up in, and the balancing act she must perform in order to keep it from consuming her family.  And mercifully “Damages” limits a climactic warehouse fight scene between the boring arms dealer and Diggle in the vigilante costume to about a minute of screen time.

If there’s still a part of ARROW I’m having trouble getting excited about, it’s Oliver’s pursuit of the dull criminals on his dad’s “list,” or about his quest to clean up the crime in Starling City.  Why exactly is he doing this, again?  ARROW hasn’t yet shown us how a crusade against criminals in general is personal for Oliver, the way Batman’s origin story does, (and that’s the obvious point of comparison), so ARROW goes off the rails for me every time Oliver says something like, “The mission comes first” when explaining to Diggle why he intends to pursue the arms dealer even while under house arrest and facing prison.  But at least we know that it’s personal between Oliver, Fyres and Deathstroke now, and that’s why “Damages” has given me hope that Oliver’s vigilante crusade might become a lot more interesting in future episodes.