Hathaway is great, the sketches, not so much though the LEGEND OF MOKIKI is pretty awesome 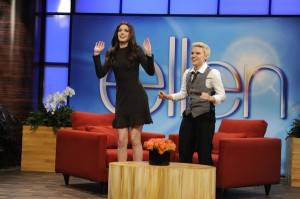 Like her previous two stints, Hathaway is fantastic and very funny. In many ways she’s a stronger performer than the material she’s given and her ability to put herself out there and look ridiculous is part of her charming allure.

The biggest disappointment though is SNL’s inability to turn the recent election into something funny and original for its post-election episode. They flailed throughout the Presidential debates and after all is said and done, they don’t have anything left to say post-mortem – even though there were many things they could have targeted.

Here’s a rundown of the sketches for this week.

MITT ROMNEY – The cold opening features Mitt Romney dealing with losing the election and drinking heavily from a carton of milk (not funny, sorry). There should have been more here, especially with Sudeikis as Mitt, but it doesn’t deliver. Shockingly unfunny. Grade: C-

MONOLOGUE – Yes, Hathaway can sing and she shows off her pipes in this amusing musical number about “Sundays” – namely the day off after a week of slaving on SNL. This is a loose tie in to LES MISERABLES which Hathaway stars in this holiday season. A clever song and a chance for the entire cast to get into the singing act. Grade: B

GIRLFRIENDS TALK SHOW – Cecily Strong is featured heavily this episode with a potential new recurring character which is just a variation of her Weekend Update character (the girl you shouldn’t have talked to at a party). Here, she’s paired with newcomer Aidy Bryant who is jealous that her co-host has a new best friend (Hathaway). There’s some chemistry here between Bryant and Strong and it’s clear this sketch will likely recur. It’s not there yet, but it shows promise. Grade: C-

THE LEGEND OF MOKIKI AND THE SLOPPY SWISH – Hands down the best moment of the entire show. This is a quasi-SNL DIGITAL SHORT (though I’m unsure why they stopped using that tag since Andy Samburg left). It features Kenan Thompson singing the ballad of Mokiki (Taran Killam), a disease-riddled man on the streets of New York doing the “Sloppy Swish” dance. It’s silly, and incredibly funny. Plus, it gives Thompson one of the funniest bits he’s done all season. Great stuff and definitely the water cooler sketch of this week. Grade: A-

McDONALDS FIRING – Bobby Moynihan and Strong make a bid for another returning sketch, this time two oblivious employees who think they’re going to get fired so they go off on a tirade about what they hate about their current co-workers. Surprisingly funny and a lot of energy from both Moynihan and Strong (who once again gives another stand-out performance). I definitely want to see these two characters back. Grade: B+

WEEKEND UPDATE – As always, Seth Meyers is solid, but Jay Pharoah as Barack Obama is once again a total failure. Now he’s lifting the dancing in his seat bit that Bill Hader does when he does his James Carville impersonation. There’s a couple of amusing lines during his speech, but Pharoah is a great impersonator but he brings nothing to the mix creatively to make his Barack stand out. Not only is he eclipsed by the Obama impression by Dion Flynn on LATE NIGHT WITH JIMMY FALLON, but also KEY AND PEELE’s great take on Obama. Jordan Peele plays Obama and Keegan-Michael Key is Luther, Obama’s anger translator on that show. This should have been an SNL sketch. It’s been a funny bit on that Comedy Central series, and it’s shocking SNL couldn’t find their own successful Obama take. They used to be the frontrunners, not the second string when it comes to political parodies. Moynihan returns as Drunk Uncle and once again slays. Very funny. Grade: C+

ELLEN – Can someone please tell me why we need an Ellen parody right now?  I get that Kate McKinnon does a killer impersonation, but this sketch is ten years too late. Maybe it was an excuse to showcase Hathaway with her killer Katie Holmes impersonation, but it’s just not very funny. Props to McKinnon who wrestles a few laughs out of this mess, but SNL is going to have to try a little harder when it comes to its parodies. They completely drop the ball on the election, but they push this out there. Very disappointing. Grade: C-

FLARITAN – SNL has also been short on commercial parodies this year, but this one for an allergy medicine called FLARITAN is very funny. It focuses on a drug that allows you to support your fake allergies such as (“I’m allergic to smoke” or “I’m allergic to yogurt.”). Funny stuff, and strangely, this was buried as the last sketch of the evening. Grade: B+

A very uneven episode, but it’s fascinating to watch the show reinvent itself on the air – especially in trying to create new recurring character and figure out which featured players are working and which aren’t.

Killam is definitely taking over the show and will be a stand-out for years to come as Sudeikis, Armisen and Hader slowly exit the show.

I’m also impressed with Strong, who this week really brought it.

I worry about Aidy Bryant, because the show’s writers don’t have any idea what to do with her. She has a spark, but she’s so far been misused.

The musical guest is Rihanna, and her songs are serviceable. It is interesting to see the production value ratched up a notch with Rihanna’s first musical performance of the night. Usually the bands play in a simple setting and showcase their chops. Here, there was a lot of visual mumbo jumbo that takes away from the fact that Rhianna is pretty interchangeable artist with no real identity of her own. She can sing, but when your claim to fame is your love/hate relationship with Chris Brown, you’ve already lost a good portion of your audience.