The writing is still a bit rough, but having someone as game and as good as Mars elevates everything 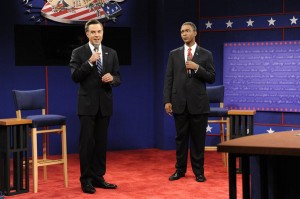 After a couple of really embarrassingly bad weeks on SATURDAY NIGHT LIVE, there’s a bit of a rebound with their latest episode hosted by singer Bruno Mars (who also served as musical guest).

Again, the writing is a bit on the weak side, but when you have someone who is game and as talented as Bruno, even lackluster material suddenly comes to life.

The episode begins with the expected Presidential Debate #2 as Jason Sudeikis tears through the sketch as Mitt Romney and Jay Pharoah under performs as Barack Obama. I’ve complained about this before, I’ll complain again, Pharoah is intensely talented, but he’s just not strong enough to hold his own against Sudeikis. I  think it was a mistake replacing Armisen with Obama. The writing in this sketch is quite good though and Pharoah does conclude the sketch much stronger than he began it.

Finally featured player Aidy Bryant is given something that shows off her chops, being moderator Candy Crowley. This girl is really good, but they need to figure out what to do with her (they’ve wasted her so far this season). It’s also great that she gets to say “live from New York, it’s Saturday Night.”

Tom Hanks also pops up for some support, appearing in two sketches, including the cold opening. As always, he’s fantastic.

Here’s the rundown of this week’s sketches. 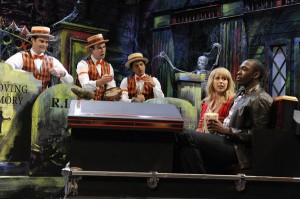 MONOLOGUE – Bruno Mars is a fantastic, soulful singer, and he does a big musical number talking about acting being a new thing for him. He’s so fun and vibrant, this really showcases what a powerhouse this guy is. Phenomenal.  Grade: A-

BRAD PITT COMMERCIALS – There are four different commercial parodies of the Brad Pitt Chanel commercial. Taran Killam does a good Pitt, and these parodies are okay (it’s great seeing Pitt shill for Taco Bell). It’s a good idea in theory, but the writing is just okay. A noble effort and the best thing in its favor is that these are incredibly short. Overall Grade: B-

HATERS – A white trash talk show where the audience hates the guests and themselves. A questionable sketch, that’s parodying something (trash talk TV) that’s already a parody anyway. Bobby Moynihan plays a white trash mama, but when you have a cast of capable women, why put the male performers in drag. Once again, Mars, playing Moynihan’s white trash daughter steals the spotlight. He’s quite good, but the sketch doesn’t work. Grade: D+

PANDORA – Once again a spotlight for Mars as a singer, Pandora goes down and they need someone to popular the internet radio with someone singing songs by Aerosmith, Green Day and others. This showcases Mars’ incredible singing skills and the sketch works because he’s so darn good. Not really funny, but just plain fun. Grade: B+

SAD MOUSE – A pre-taped short with Mars playing someone who is depressed, puts on a Mouse costume and finds a soul mate. Sweet, simple and really different than many SNL pre-taped segments. Loved it. Grade: A-

AMUSEMENT PARK – Ever since they did this sketch with Jim Carrey, I’ve been a fan. The gist is couple gets stuck on an amusement park ride and the animatronic robots start taking on a life of their own. Killam is hilarious, as always and it’s fun to see Tom Hanks pop up at the very end. Grade: B+

WILDERNESS LODGE – When sketches don’t work, the biggest SNL sin is to stretch it to a length that makes you want to fast-forward through it. The Wilderness Lodge is a sketch that if it went on two minutes too long, it would be absolutely dreadful. The idea concerns a couple cooming to a lodge and wants to rent bikes and trek up to Yeti Point. Mars place the proprietor of the lodge who goes bug-eyed every time they talk about the Yeti. The pay-off involves Bill Hader having a relationship with a Yeti. The sight gag at the end is worth the wait. Funny and concise. Grade: B

WEEKEND UPDATE – Seth Meyers gets in some good “Presidential Dos and Don’ts” for the next debate, Stefan (Bill Hader) shows up with hilarious Halloween things to do.

As far as Mars as a musical guest – he’s stellar. This guy has chops and he’s going to be around for  along time. And like Katy Perry, he proves he’s quite versatile and can have a career beyond just being a fantastic singer.

Hopefully this episode is a turning point for SATURDAY NIGHT LIVE this season. Funny, amusing, heart-warming and eclectic, it provides a nice balance and with Louis C.K. on tap for the first episode back in November, this could prove to be a very solid one-two punch.