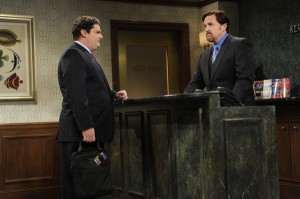 When it was announced that Louis C.K. was hosting SATURDAY NIGHT LIVE, it seemed like a perfect fit for the show. Here is a comedian who has forged a unique identity, has a very funny comedic voice an has standards so high that he writes, produces, directs and sometimes edits his successful FX TV series.

Well, it didn’t take long to see what he was striving for during the latter part of the show – namely, bringing back that very funny, very silly skit that was the hallmark of the show’s first five years.

From a Monty Python-esque sketch involving a guy being read the weird hotel fees as he tries to leave to the airport to a very bizarre “Last Call” bar sketch featuring C.K. and Kate McKinnon, it was top notch humor throughout with only a few missteps along the way.

The stuff that worked best is C.K.’s wry observational humor and characters that have a befuddled look as the rest of the people in the sketch around him go crazy.

MAYOR BLOOMBERG: The Cold Opening was very simple and very effective. Addressing Hurricane Sandy, Fred Armisen plays New York Mayor Bloomberg with a sign language interpreter as to what just happened and how to handle it. Cecily Strong is the over-the-top interpreter and is quite good. The sketch brings in New Jersey Mayor Chris Christie and presents his Jersey interpreter (Nasim Pedrad) for ample comedic effect. Very funny and a great way to start off the show. Grade: B+

MONOLOGUE: C.K. gets down to business, using a handheld mike and doesn’t even really acknowledge he’s on SATURDAY NIGHT LIVE, but rather acts like he’s doing his standup act. It works. Very, very funny and no nonsense. Again, it’s a very old school early SATURDAY NIGHT LIVE approach to monologues. Simple and sweet and letting the host what he does best. Grade: A-

FOX AND FRIENDS: This sketch has become a solid mainstay on the show as Taran Killam, Vanessa Bayer and Bobby Moynihan play clueless hosts of the Fox show where they get all their facts wrong and skew things to the right-wing agenda. C.K. plays someone from FEMA trying to explain what to do during the state of emergency in New York, and his befuddled reactions are priceless. Grade: B+

LINCOLN: In a pre-taped bit, C.K. sends up his own FX series, playing a Lincoln-fied version of himself. He even does a redux of his title sequence (with Lincoln) has it down to a tee as Lincoln deals with recently freed slaves and his own paranoia about getting assassinated. Again, very clever. Grade: B+

AUSTRALIA’S SCREEN LEGENDS: Not sure what they’re making fun of here, but the joke seems to be the classic Australian screen legends just didn’t have the panache or the charm of the American screen legends from the 1940s. A couple of okay laughs, but it’s pretty much a dud of sketch despite Bill Hader, McKinnon and C.K. rising about the stiff writing.

WEEKEND UPDATE: A solid outing with a great moment with Jason Sudeikis as Mitt Romney making one last plea for the people to vote for him and Strong reprising her character of the “Girl You Shouldn’t Have Started a Conversation with.” Strong is great, and this looks like it may be one of the first major breakout characters of the new season. Grade: B

MOUNTAIN PASS:  Not great, but at least amusing as C.K. plays a warrior who heads to the top of the mountain with his horn bringing a crystal to some other warrior. Watching C.K. fumble through the complicated names and missing his horn cues is perhaps the funniest part of the sketch, and again, there’s an old school SNL charm to the skit. It’s short and doesn’t drag on too long and at least has a punchline.

HOTEL FEES: Hands down the best sketch of the night and something that would feel right at home on C.K.’s show. Moynihan plays a guest at a hotel trying to check out, but has to deal with the hotel clerk verifying and rattling off a whole bunch of silly fees. The timing is impeccable and both C.K. and Moynihan have a great rhythm on this one. This is the kind of sketch you wish SNL did more of Grade: A

LAST CALL:  More observational humor akin to what you find on C.K.’s show, though much broader as C.K. and McKinnon are the last patrons at a bar who haven’t hooked up – and are drunk enough not to care that there’s no other options for some meaningless sex. The highlight is the bizarre lip lock they engage in. Funny stuff. Grade: B

Musical group is fun. and they definitely brought that with two catchy songs off their latest album.

Again, one of the best episodes of the new season and a reminder of when SATURDAY NIGHT LIVE does things right, they do it right. Bring back C.K. for more – he elevated everyone’s game.