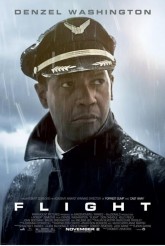 You can see what the principals of FLIGHT – star Denzel Washington, director Robert Zemeckis and writer John Gatins – are going for and why they think it might work. The concept is both ambitious and admirable: tell a story of a man battling with addiction through the lens of the kind of exciting event that, in other hands, would take up the entire movie.

Washington’s “Whip” Whitaker is neither a loser rolling downhill, nor is he a celebrity succumbing to stress of fame. Instead, he’s a brilliant commercial airline pilot. Yes, he shows up for work drunk and yes, he drinks on the job, but when the plane’s controls freeze up mid-flight, he has the skills, know-how and calm to land the plane with minimal loss of life. Yes, the plane cracks on impact, but it’s right-side up and intact enough to allow most of the passengers and crew to escape – under the circumstances, few if any other pilots could accomplish such a relatively safe conclusion to the catastrophe.

However, when Whip wakes up in the hospital, he finds that along with a grateful public, he’s got the potential for deep trouble with the National Transportation Safety Board. His blood was tested while he was unconscious, and now he’s being investigated to see whether he was drunk on duty. We know he was, and he knows he was – the question is …

Not what we would immediately imagine the question would be. Since we are presented with two facts – that Whip drinks hard and that his drinking did not seem to affect his judgment or skill during a work-time crunch – the natural assumption would be that FLIGHT is going to be a tug of war between Whip’s gifts and his flaws and whether either one negates the other.

However, although the legal aspect of the situation gets its due, along with a great supporting cast that includes Bruce Greenwood, John Goodman and Don Cheadle, FLIGHT instead has its heart in examining Whip’s alcoholism. We see Whip trip up time after time, no matter what his needs or what’s at stake. We get the point, and it is something a little different from the usual study of addiction – Whip is neither a loser nor a celebrity succumbing to fame or boredom, but rather a man who would seem to have everything going for him except sobriety. However, FLIGHT is so intent on making sure we understand how this works that the plane crash and Whip’s extraordinary feat of piloting become something of a maguffin, there to make sure we get the point rather than as part of what we’re meant to fully examine.

On the other hand, there is a fair amount of entertainment value in the scenes with Goodman as Whip’s longtime cohort, Greenwood as an old friend and Cheadle as Whip’s new lawyer, all trying to make sure the pilot straightens up and flies right at his hearing.

Washington gives a thoughtful, intelligent performance here, not afraid to show Whit’s brutish sides as well as his Zen mastery of the art of flying and his other admirable traits. It’s just that after awhile, the film takes on the same repetitive rhythms of many other pieces on addiction, the kind that will make recovering addicts and their helpers cringe in recognition and slightly try the patience of the audience.

Director Zemeckis does stage a truly memorable crash-landing, the kind that will no doubt be referenced in air thriller films to come.  From there, he, Gatins and Washington want to keep us guessing, but hanging around an alcoholic is grueling work, whether in fact or in a theatre. FLIGHT makes its points, but it never capitalizes on what might make it unique.

TCA 2011: Could HOUSE and BONES not be renewed for next season?
CD Review: Joey Ramone - ...YA KNOW?
Movie Review: THE HOBBIT: AN UNEXPECTED JOURNEY
CD Review: Lone Justice – THIS IS LONE JUSTICE: THE VAUGHT TAPES, 1983