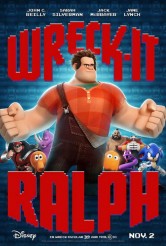 Another triumph from the Walt Disney filmmaking pixies

TOY STORY was far from the first tale of playthings coming to life once humans were out of sight. The movie’s success owed everything to its execution and details. WRECK-IT RALPH likewise starts with this notion – although in this case, the “toys” are the video characters in arcade games – and goes to wonderful, funny, touching places.

Less briefly, the title figure in WRECK-IT RALPH (voiced by John C. Reilly) is the destructive villain in the “Fix-It Felix Jr.” arcade game. After thirty years of menacing and therefore being rejected by his neighbors within the game, Ralph feels he’s in need of help. Fortunately, once the arcade is closed for the day, characters can leave their own games and visit with others. Due to his desire to be as popular as Felix (voiced by Jack McBrayer) and his misunderstanding of cause and effect when it comes to such matters, Ralph makes a quick stop in a neighboring game in search of something he thinks will improve his life. Ralph actually acquires what he’s seeking, but before he can bring it back home, he crash-lands in a third game, where there’s much more going on than meets the eye.

The screenplay by Phil Johnston and Jennifer Lee, from a story by Johnston and RALPH director Rich Moore, is admirably sound of mind, body and heart. The plot is easy to understand without being simplistic, having the rules of arcade character life laid out cleanly and logically. There are pieces of information deftly woven into the action that seem merely anecdotal when they first surface, only to pay off hugely later on.

Visually, RALPH is an absolute treat, with multiple styles and eras of game animation showing up separately and together. The filmmakersmore pull out all the stops, giving us landscapes with all sorts of diverse elements where everything still ultimately fits together. The 3D isn’t strictly necessary, but it adds agreeable depth and, unlike what happens with a lot of other movies, the color here doesn’t suffer under the 3D eyewear (indeed, the hues are so bright in some sequences that they’d be blinding if they were any more vivid).

There are cameos from plenty of “real-world” game characters (i.e., from games that audience members actually play), but they never take over, because the original characters here are so engaging. Reilly’s plaintive, nice-guy tones inform Ralph, who somewhat resembles the actor and is written in a way that makes us always feel for him, even when he gets a little cranky. McBrayer makes Felix an eternal wellspring of genuine kindness – he may exist in a game that resembles SUPER MARIO BROTHERS, but his soul is pure Mayberry.

There are three other major players here. Vanellope Von Schweetz is given elfin, youthful tones by Sarah Silverman, who has swell comic timing. The brusque, Ripley-like Calhoun is essayed with perfect toughness by Jane Lynch, who sounds as though this is exactly what she was born to do. Alan Tudyk voices King Candy with a kind of old school Hanna-Barbera flair, stirring ancient memories of ‘60s and ‘70s Saturday morning cartoons.

Verbal and visual puns are abundant and delightful. The filmmakers deserve special credit for pulling off something that seems on its surface impossible – they’ve taken the basic premise of ALIENS/STARSHIP TROOPERS and made it safe for even very young RALPH audience members, while still making it clear to older viewers what is being referenced.

However, what really makes WRECK-IT RALPH something special is the way the characters rise to the occasion, showing their mettle even when doing the wrong thing for the right reasons. The script allows Ralph an evolution that is rare even in live action, going from grumbling nemesis to true hero without ever losing his Hulk-smash giant fists.

One could rhapsodize for days about the pleasures of WRECK-IT RALPH (one cookie-based joke is laugh-out-loud funny upon recollection), but it would be churlish to ruin the surprises. Let’s just say the proper advice regarding WRECK-IT RALPH is to SEE-IT NOW.