Unfunny, despite the best efforts of its very capable host 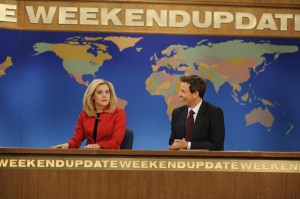 We’re knee deep into the Presidential political campaign and SATURDAY NIGHT LIVE is floundering with its political sketches and overall comedy – and this is only the second episode this season.

With Joseph Gordon-Levitt hosting (he did a fabulous job the last time he appeared on SNL), delivering something funny should not have been a problem. Yet, with all the good will and characters Levitt showed off, the material did not support him.

The good news for supporting players Tim Robinson and Kate McKinnon, they got some additional face time to show who they are. And even Jay Pharoah, who has been predominantly sidelined was given more sketches than he had in a given show all last year.

However, you need material to make this stuff work and make you laugh. And I barely laughed.

WEEKEND UPDATE was the strongest segment as Seth Meyers delivered a few amusing Mitt Romney jabs as well as an Obama rant. Good stuff there.

Supporting player Kate McKinnon also offered up a pretty funny Stepford-esque portrayal of Ann Romney. McKinnon really stepped to the fore this episode to prove she has something special as a performer. I like her, and I think she can help fill the void left by Kristen Wiig. Alongside Nasim Pedrad and Vanessa Bayer, they have strong women on the show to carry it forward.

A commercial for a Dos Equis knock-off beer from The Most Interesting Guy in the World’s douchebag son (Gordon-Levitt) was also mildly funny.

The rest of episode, not so much. The cold opening featuring a spoof of the LIVE WITH KELLY AND MICHAEL morning show was dead on arrival, Levitt playing a weird daughter with weird parents flat-lined and even a sketch involving rich rappers called THE FINER THINGS was absolutely terrible.

Both Bill Hader and Jason Sudeikis were largely under-utilized this episode, which is a sign executive producer wants to bring the new performers front and center but aside from McKinnon, they’re just not ready.

Tim Robinson is quirky, but like Bobby Moynihan, he hasn’t found his SNL mojo yet. Aidy Bryant and Cecily Strong were pretty much AWOL. And Pharoah (now a full-fledged cast member) despite the extra screen time, continues to prove he’s a great mimic, yet doesn’t bring any comedy panache to the table. I hate to compare him to Eddie Murphy’s stint on the show in the early 1980s, but if you look at the energy and the funny Murphy brought to everything he did, compared to Pharaoh, there’s no contest. And the sad part is, I’m rooting for Pharaoh. He’s a ball of untapped talent, yet his ability to really shine and make us laugh doesn’t get past, “oh, that was a dead-on impersonation.” Writing is one element of this, but the other is the performer. And he needs to really start bringing it or he’s going to get the boot from the show.

Strangely, the other thing that is desperately missing is the SNL Digital Shorts. Most of those were created and performed by Andy Samburg who left last season. It’s a gaping hole that needs to be filled by somebody – and hopefully someone will rise to the occasion and resurrect that very important part of SNL’s recent new media history.

SNL enters Season 38 with the cards stacked against it –cast defections, new people trying to find their way, other seasoned players almost ready to leave. It’s going to be tough moving forward, but after 38 years, the show has weathered some really rough patches. This is another one, but if Michaels has proved anything – the show will always find its way again.