The downward spiral of SATURDAY NIGHT LIVE continues with this abysmal episode hosted by Jeremy Renner.

While Renner is an amazing dramatic actor, doing live TV is not necessarily his strong suit, although when his piano failed to play during his monologue, he handled himself quite well until the problem was fixed.

That said, most of the sketches were terrible this week as the show has clearly lost its political satiric edge and even its attempts at regular sketches failed.

Cold Opening – C-SPAN Booknotes: Clearly the General Petraeus scandal should have been a boon to the show, instead we get this tepid cold opening where Paula Broadwell (Cecily Strong) reads passages from the General’s autobiography at a book reading – clearly passages that were omitted. While Strong is good, the sketch bombs and the show unfairly doesn’t even let her say “live from New York it’s Saturday Night” instead leaving it to the announcer to do it. Grade: D+

Monologue: Renner shows off his singing skills by explaining he’s been writing theme songs to all of his movies he stars in – but for some reason, they’re never used. THE AVENGERS song doesn’t work, but singing “I’m going to kill somebody” to the tune of “Use Somebody” from Kings of Leon in relation to THE BOURNE LEGACY actually kind of works. Too bad he didn’t end it there and went off on a terrible MISSION: IMPOSSIBLE – GHOST PROTOCOL end note. Grade: C+

Your Hometown: A pre-taped commercial that promotes staying at “your hometown” as if it were a hotel. Very clever and one of the few genuinely funny moments in the entire episode. Grade: B

The Californians: Thanksgiving: Maybe it’s because I live in California, but I still don’t get this sketch. It’s so unfunny and aside from the cast putting on quasi-surfer accents, it’s always a mess. The only saving grace this time is Fred Armisen, who starts cracking up and has a hard time getting back into character throughout the rest of the sketch. Grade: D

The Situation Room: Jason Sudeikis is Wolf Blitzer as they take another stab at the General Petraeus scandal and the non-stop new coverage. A good idea in theory, but it fails in execution. Grade: D

The Stand Off: A filmed bit which parodies gun “stand-offs” in movies – except, what happens when someone has a stand-off and still needs to do things like pick up their kids, take a shower and sleep. Actually, this one is clever, but again, lacks any major laughs. Grade: B-

At this point, Seth Meyers is the glue that holds the show together, because if an episode is bombing, you can expect him to swoop in and save the day. As an added bonus, New Jersey Governor Chris Christie shows up (for real) for a pretty good bit toward the end. Grade: B 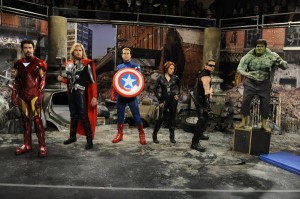 The show decides to make fun of the Hawkeye (Renner) character in this AVENGERS parody – showing how all the other superheroes are very dynamic and beneficial  while Hawkeye just shoots arrows. I’m sure Disney and Marvel aren’t too pleased at this one because it really takes not too flattering potshots at his character. Somehow, this one should have been the winner of the evening, but it’s another dud. And poor Renner, a great actor, just struggles through this sketch, either by embarrassment or the lack of strong writing. Grade: D

Cool Drones: A strange attempt at bringing back the animated TV FUNHOUSE that used to be a SATURDAY NIGHT LIVE staple (but they don’t call it TV FUNHOUSE probably very legal reasons). A group of military drones also moonlight as a boy band. Awful. Grade: F

Movie Set: Another dud of a sketch as Renner plays himself on a movie set having to deal with an unruly blow-hard actor (Sudeikis) who can’t even take a slap. What is going on this week? Sudeikis is good in just about everything he does, but he can’t save bad writing. Grade: D+

Coroner: Now here’s where the show gets something right. Like the Louis C.K. hotel sketch a few weeks back, this simple skit features Sudeikis, Bill Hader and Renner and it’s all about comic timing and delivery which they all nail perfectly. Sudeikis is a cop who brings Renner in to i.d. his dead brother at the Coroner’s office. What results is a silly bit of comedy, but it’s refreshing compared to the rest of the episode. Grade: B+

Maroon 5 is the band, and they do a good job as always, though you would have expected singer Adam Levine to appear in a couple of sketches as well (he does appear in “The Stand Off”).

Everyone knows SATURDAY NIGHT LIVE chews through sketches each week during dress rehearsal, many not making it on the air. This week, HULU showcases a “Thanksgiving” sketch (you can click on it in the above right hand corner) that as strange as it is, proved to be funnier than many of the sketches that got on the air. It features Kate McKinnon crashing her neighbors Thanksgiving after a quarrel with her crazy husband (Renner). McKinnon, as always, is fantastic, and Renner is more committed and hilarious in his sketch than anything else on the actual live show. It’s worth checking out and it’s a mystery as to why it didn’t make the cut for the live show.

Overall, the episode is a bust and a sad reminder why you have to be careful bringing movie stars onto the show (Daniel Craig anyone?)

The next episode will feature Jamie Foxx, which will likely be a major improvement over this mess. At least he knows how to do sketch comedy right.