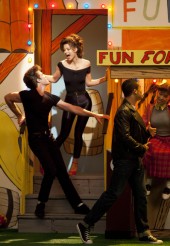 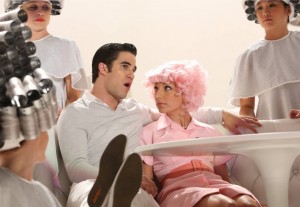 How do you screw up GREASE, the excellent musical and 1970s film that celebrated young romance in the 1950s?

Well, you hand it over to GLEE. With “Glease” we get the kids at McKinley High putting on their latest fall musical, and the musical part, yes, is pretty damn good. It’s everything in between that totally sucks.

First off, Sue (Jane Lynch) is back to her old tricks, making sure Wade (Alex Newell) can’t play Rizzo in the school play and even calling in Wade’s parents who won’t let him dress up as a girl at school. Sue’s trying to protect him from bullies, and if I truly believed that, then I think her intentions would be sincere, but sadly, they’re not. It’s just another one her annoying crusades just to make a point (though, I have to admit, she is right despite how she handles it).

Then there’s Kitty (Becca Tobin) who has become the new Santana and is absolute evil. Hating that Marley (Melissa Benoist) got the lead in GREASE, she sets out to make her life hell by making her costume smaller each night, in order to make her think she’s getting overweight like her mom. Here’s the problem though. Marley has to be an idiot to think that her costume is getting smaller, yet her regular clothes have stayed the same. It doesn’t work.  Yet again, GLEE has taken a great character like Marley and turned her into a weak, and easily manipulative character. Kitty even convinces her to start vomiting in the bathroom to stay thin.

Ugh! It’s terrible. It’s one of those AFTERSCHOOL SPECIAL episodes of GLEE gone awry that will come off just as terrible ten years from now  as it does now.

And finally, Cassandra July (Kate Hudson) still doesn’t like Rachel (Lea Michele) but offers her up her frequent flyer miles so she can go back to McKinley and see the school play. The real reason – to have sex with her new love interest Brody (Dean Geyer). The big question – isn’t this illegal? She’s a teacher, he’s a student, huh?

There’s also a pay-off to all the break-ups from a few episodes back including Finn telling Rachel they should never talk or see each other again (because she’s moved on to Brody). It’s a nice moment. Even nicer is the musical number “”You’re the One That I Want” that starts off with Marley and Ryder (Blake Jenner) and the morphs into a fantasy sequence where Rachel sees her and Finn up there singing.

Kurt (Chris Colfer) and Blaine (Darren Criss) have a hard time reconciling. Only Santana (Naya Rivera) who returns to play Rizzo in the play and Brittany (Heather Morris) are the only ones who seem to be able to be civil.

So what does this all mean for GLEE? Well, sadly, the whole Rachel storyline seems to be about over. The show works best when it’s at McKlinley as last episode proved and there’s very little room for graduates to come back.

And by taking Marley and really weakening her is a GLEE specialty. They took Quinn (Dianna Agron) and totally destroyed her too after three seasons.

Can GLEE survive past this year. I thought so, but when it doesn’t know what a good thing it has with the great characters it already has and proceeds to neuter and destroy them, it’s clear it will be a bumpy ride for renewal. Maybe it’s time to call it quits now before it gets any worse.