A great bounce back episode after last week's awful 'Glease' 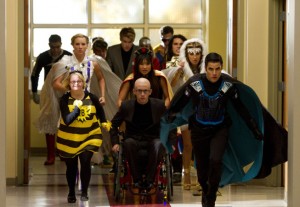 It’s surprising that Fox would air a brand new episode of GLEE on Thanksgiving evening, but they decided to take the plunge with “Dynamic Duets” resulting in one of the best episodes this season.

Honestly, I expected this episode to be a complete disaster – as we see many of McKinley High’s students joining the superhero club. Yet, writer,  director and co-creator Ian Brennan does a great job of playing with superhero conventions and telling a story that’s clever and funny without the heavy-handedness that occasionally comes with GLEE.

The big dilemma comes with Blaine (Darren Criss). We not only see who he cheated on, but also see that he misses being part of the Warblers. They try to convince him to return to the fold, but Blaine has the courage to realize he does belong at McKinley.

The love triangle between Jake (Jacob Artist). Marley (Mellissa Benoist) and Ryder (Blake Jenner) continues to heat up resulting in some interesting dynamics. In an attempt to get people who don’t like each other, to work together, Finn (Cory Monteith) forces them to do duets together.

So what we get is Jake and Ryder singing “Superman” (and doing a great job) and actually forming an actual friendship. Ryder apparently is dyslexic, so we get that nugget thrown in while we see Jake dealing with bigotry for being part white, black and Jewish. The two of them have each other’s back and yet they still have to deal with their feelings for Marley.

Meanwhile, Kitty (Becca Tobin) and Marley are paired together and they sing “Holding Out For A Hero.” They sound great together too, though Kitty is convincing Marley she’s fat and still tricking her into throwing up so she can stay thin. I still hate this eating disorder storyline, especially with Marley who was written so smart up until last week’s introduction of this awful subplot. I get GLEE trying to hit all the AFTERSCHOOL SPECIAL topics, but couldn’t they have done this with another character. 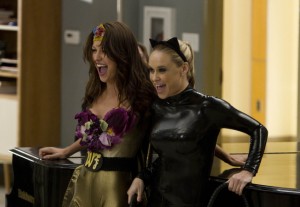 And finally, Finn slowly finds his teaching mojo, and, of course, we get a great rendition of David Bowie’s “Heroes” with Blaine and Sam (Chord Overstreet).

As with every season before, GLEE is once again on a roller coaster ride jumping from a great episode to a dreadful one all within a two week period.

I will stand by what I’ve said before and that’s keeping the show centered on the kids at McKinley and dumping the outside storylines with the former cast. In what is a rare feat for any show, GLEE introduced some really good characters this season and I’m enjoying their storylines moreso than watching rehashes of old storylines going on with the graduating classes arcs.

We’ll see how it all shakes out, but Sectionals is coming up and many old faces will be returning next week for winter break. I hope it doesn’t end up an off week.