Yes, there’s tons of stuff to be thankful for including this episode being quite good 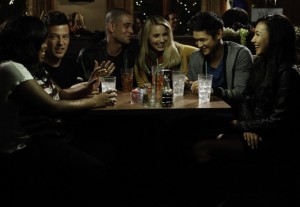 In a weird bit of scheduling, the latest episode of GLEE is called “Thanksgiving” and is airing a week after Thanksgiving.

Huh? Couldn’t they have found a way to schedule the thing so it landed on Thanksgiving day?

That said, “Thanksgiving” is actually another strong episode augmented by the growing interest in the new kids that have been added to the cast. The show is desperate to find ways of bringing the graduating class back into the mix, yet it always feels really forced.

This episode, many of the McKinley’s alums return for the Thanksgiving holidays and help out with Sectionals. Yet, for the life of me, I don’t get how people who have graduated from the school are allowed to roam freely through the halls with the current students.

Yes, we live in the fantasy world known as GLEE where anything and everything is possible.

Returning alums include Quinn (Dianna Agron), Mike (Harry Shum Jr.), Puck (Mark Salling), Santana (Naya Rivera) and Mercedes (Amber Riley). And in an even weirder moment, Finn (Cory Monteith) joins them for dinner and they start acting like refugees from ST. ELMO’S FIRE looking back on the “glory” days at McKinley. Ummm, wasn’t those glory days six months ago?

It is nice to see Quinn return, with the show actually giving Agron more to do and sing in this episode than she was given most of last year.

Finn decides to pair up the old alums with the newbies to see if they can learn something from their quasi-counterparts. It makes for some interesting drama. 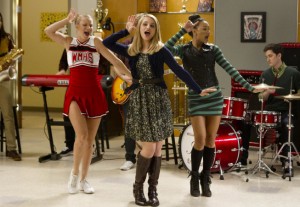 Meanwhile, Marley (Melissa Benoist) is still dealing with her body conscious issues and taking laxatives to lose weight, on top of her constant vomiting for the same reasons. And it comes back to haunt her when she collapses during Sectionals.

The episode ends on a cliffhanger with Marley collapsing, so we won’t know until next week if they made it through Sectionals or are disqualified.

In New York, Kurt (Chris Colfer) is still pissed at Blaine (Darren Criss) for cheating on him. In one of the strongest moments of the episode, Kurt does call Blaine trying to reconcile. Also in New York, we get Rachel (Lea Michele), Kurt and her budding new love interest Brody (Dean Geyer) celebrating Thanksgiving dinner together.

While this episode does feel a little light on plot, it still works because of the nice moments that are wrung out of pairing up old and new cast members. It’s surprisingly a smart idea and one that isn’t as annoying as it could have been in an obvious attempt at bringing back some of the old cast.

I still feel that the old cast is a bit of a distraction though from the good thing GLEE has going with the regular cast. It’s trying to have its cake and eat it too, and well, it works only part of the time.

Another small negative is the show’s attempt at covering “Gangnam Style” which fails miserably. Not good at all. Embarrassing is the only word I can come up with.

It looks like the show will be keeping some of the old cast around for a little while longer, but the thing I keep wondering how these 18 year-olds can go to college, retain their jobs and have a real life when they continually hang around the McKinley halls?

As I’ve said before, only in the reality of GLEE is this possible.