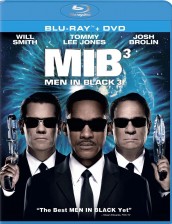 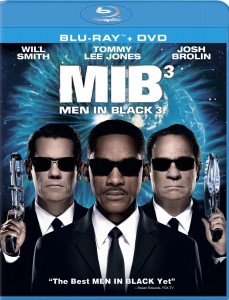 MEN IN BLACK III – While I have not been a fan of the previous two MEN IN BLACK films, mostly because I am not a fan of Will Smith at all and I thought the whole premise was just beyond stupid. The third part of the film is, well, more of the same but with a hefty, hefty amount of more killing. The plot revolves around a interplanetary serial killer that escapes from a high profile alien prison and goes back in time to kill the dude that put him away, which happens to be Agent K (Tommy Lee Jones). When this happens, Agent J (Smith) goes back in time to find his younger version (played brilliantly by Josh Brolin) and seeks to defeat the bad-ass alien before he can murder K. So with the amped up deaths, some good period sets from the 1960s, some decent comedy this time and lots of crazy aliens running amok it is a fun film if still a bit brainless and ludicrous.

Check out the three disc version of the film that includes the DVD, Blu-ray and digital copy of the film along with a host of neat special features. 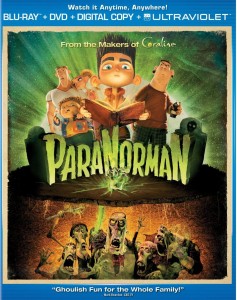 PARANORMAN – From the creators of CORALINE comes this nice horror homage to bizarre 1980s films of the past. Being a PG movie it is probably not the best fare for all ages (as is CORALINE and CORPSE BRIDE) but for those that enjoy a good animated flick that has some good horror elements this will find a place (especially for younger boys). The film centers on Norman Babcock, a boy that can see and communicate with the dead. While this obviously makes him a social outcast, his family also see him as just plain weird. They don’t know the half of it. And when a local town crazy warns him of an ancient evil that threatens the entire town, Norman is the one person that can help. Filled with zombies, spirits, fire, brimstone, curses and more this is a fun filled romp with some pretty good animation. 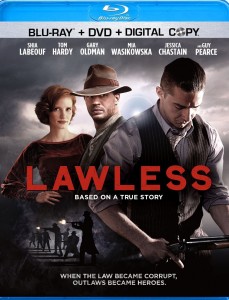 LAWLESS – Call this a film version of BOARDWALK EMPIRE with a story about three brothers running a moonshine business during Prohibition and coming up against a pretty nasty out-of-town deputy (Guy Pierce) charged with breaking up their business. While Shia LaBeouf gets top billing in this, it is really Tom Hardy that steals the show as the older brother that defies death at every turn. LAWLESS also has Gary Oldman, the lovely Mia Wasikowska and some other familiar faces you will recognize so it is hard to believe that the film is actually as dull and predictable as it is. The acting is fine if not over-the-top but it just drags and just incredibly boring at times while you wait for something you can predict to happen. A Netflix option at best. 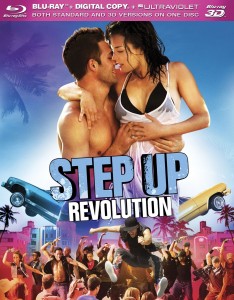 STEP UP REVOLUTION – Surprising that this series continue to churn out films but someone out there is obviously watching and as long as that happens they will continue to make them. This one stars Kathryn McCormick and Ryan Guzman – two relative unknowns but both involved in various sports or dance related fields – as two young people in Miami that fall in love while pursuing their dreams of dancing. But when a wealthy guy comes along and threatens to move thousands of people in a local neighborhood, you guessed it, they must dance their way to freedom. Completely ridiculous but obviously someone will enjoy the dancing and love story. 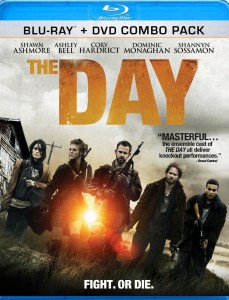 THE DAY – Interestingly enough this little post-apocalyptic ditty comes from WWE Films, whose previous jaunts have involved any number of wrestlers in order to try and expand their reach and popularity thus creating a bigger audience for their core product. This does not have any wrestlers in it. Instead it is a straight thriller about a group of survivors that hole up in an abandoned house one night. The trick here is that the house is actually a trap for a band of ruthless cannibal survivors that use it as a staging ground for their source of protein. The twist is that one of the group trapped is actually a former member of this cannibalistic group that left because she didn’t like the taste of the meat. Kidding, she just didn’t want to kill people. Not a bad flick. Nice that WWE felt they didn’t need to put in a bunch of their own people to make it work and that’s a good thing because it is pretty enjoyable and has a strong cast with Shawn Ashmore, Dominic Monaghan, Shannyn Sossamon and Ashley Bell. Worth checking out on Netflix. 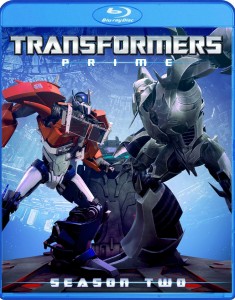 TRANSFORMERS PRIME: SEASON TWO – The acclaimed hit is back and better than ever on Blu-ray with another 26 episodes featuring the eternal struggle between Autobots and Decepticons. The second season begins where the first left off as Optimus Prime’s victory over Unicron was supposed to be an end to the conflict but it just opened the door for even more nasty bots to come causing havoc. The Blu-ray is loaded with Comic Con panel footage, interviews with the men behind the machines and a featurette looking at the entire TRANSFORMERS franchise from the early cartoons, to the movies, to the current animated series. Good stuff for fans.