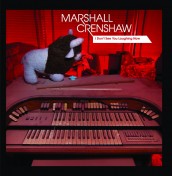 The first in a series of great, new self-distributed vinyl E.P.’s that launch at today’s Record Store Day

There’s no denying the power of Marshall Crenshaw’s power pop. With his 1982 self-titled debut album he brought a sense of rock and roll purpose with his catchy lyrics and crystal clean vocals. From “There She Goes Again” to “Whenever You’re On My Mind”, his music was in many ways out of place with the early 1980s synth movement.

Which makes his music although the more timeless today. Throughout countless exceptional albums and just as many labels, he’s weathered the musical storm and found the best way to do business in the modern age is to get back to basics.

It’s the D.I.Y. aesthetic that has led him to a new business model – producing several 10” 45RPM vinyl E.P.’s that he’s going to self-distribute within the coming year. They’re all part of a Marshall Crenshaw club (which will launch at www.marshallcrenshaw.com)

The E.P.s (six to be released over the next two years) are very simple in concept – one new track penned by Crenshaw, one cover of something obscure and a third reworking of a Crenshaw classic.

Crenshaw kicks off the series today at Record Store Day’s Black Friday releases. This now annual tradition is a mini-version of Record Store Day where artists and labels release CDs, albums and other cool items in limited edition quantities to independent record stores only.

The I DON’T SEE YOU LAUGHING NOW E.P. is a great start to a great new business model (which was funded primarily through Kickstarter). It features a great new song called “I Don’t See You Laughing Now” which was penned during Crenshaw’s JAGGEDLAND sessions.  In many ways, this is the sound we’ve come to expect from Crenshaw, a pop track with a little jazzy influence and some biting lyrics.

The second track is an obscure Jeff Lynne song written for his pre-E..L.O. group The Move called “No Time.” When Crenshaw says he’s going to do a weird song for the cover tune, this definitely takes the cake with its odd structure and use of flutes! It’s actually quite cool and I hope he continues to get experimental with these B-sides.

The final track is a live version of “There She Goes.” It’s a little bit slower than the 1980s version, but its tempo and tone is more in line with the other two songs on this set. It’s a perfect three-song excursion

The other great thing about getting the 10” is you also get a download code for the three songs as well (especially if you don’t have the ability to convert the 10” into MP3s).

While it looked like vinyl would go away completely, the extinction really came for the cassette tape instead. The fidelity and sound quality of vinyl can’t be beat and to have these limited edition releases for major albums and indie artists is great for audiophiles like myself.

While I would love a full album of music by Crenshaw, I think there’s something even more exciting about this new subscription endeavor. You actually get a surprise every couple of months from Crenshaw, instead of everything all at once. It’s a great way to keep the music flowing from this great artist and it also reminds fans what a vital and still cool artist you actually are

You can purchase I DON’T SEE YOU LAUGHING NOW at independent record stores everywhere today (quantities are limited).

And if you miss out on getting the release today, in January, the same album will be available with his new album club. You can check out more information here: www.marshallcrenshaw.com