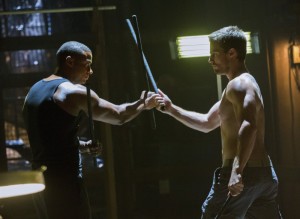 This week’s episode of ARROW, “Legacies,” has its moments, but mostly I experienced it as a missed opportunity.  After making some headway last week by revealing more of Oliver Queen’s (Stephen Amell’s) experiences as a left-for-dead castaway on the mysterious island, as well as illuminating more of the criminal conspiracy that surrounds Oliver’s mother Moira (Susanna Thompson), ARROW decided to leave both of those storylines alone this week and focus on some less compelling stuff.  “Legacies” gave us more of the romantic tug-of-war between Oliver and his best friend Tommy Merlyn, (Colin Donnell), for the affections of Oliver’s ex-girlfriend Laurel Lance (Katie Cassidy), and also a story about a family of bank robbers that was meant to illustrate something about the toxic legacy fathers can leave to their sons.

The romantic tug-of-war story is a largely one-sided affair, as Tommy’s pursuit of Laurel happens without Oliver ever being aware of it.  Frustrated by his lack of success wooing Laurel using the polished, slick maneuvers he’s used to, Tommy goes to Oliver’s little sister Thea, (Willa Holland) for advice about how to seal the deal with the object of his affection.  Thea, not realizing that object is Laurel, inadvertently gives Tommy the idea to put on a lavish fundraiser for Laurel’s law office in order to impress her.  This does, in fact, wind up impressing her.  In the process, Tommy, and the audience, learn that Thea has romantic designs on Tommy, (or at least she does when she’s drunk).  Tommy’s not happy to hear this, given that he thinks of Thea as his little sister too.

All of this is fine with me.  I’m not among the portion of ARROW’s audience that thinks its romance storyline is its most important element, but I have no doubt that that portion exists and is significant, and I don’t think those fans will be disappointed by the events of “Legacies.”

What I didn’t really follow was the bank robbery story. The bank-robbing patriarch, Derrick Reston was once an employee of Oliver’s father, Robert Queen, (Jamey Sheridan), but was unceremoniously laid off when Queen’s company outsourced thousands of jobs to China. Reston then decided to rob banks with his wife and two sons to make up his lost income, and his craziest son decided to shoot an undercover cop during their latest bank job.  There’s some debate between Oliver and John Diggle, (David Ramsey), about whether pursuing these bank robbers falls under the scope of Oliver’s vigilante duties, since Oliver only wants to pursue the names on his father’s list, and Diggle wants a more all-encompassing approach to crime-fighting.  But Diggle wins this argument, and while pursuing the robber family, Oliver learns of Reston’s connection to his late father.  This inspires him to track down Reston at a bar and try to right the injustice done to Reston by offering him a new job.

I like that Oliver’s guilt over his father’s crimes would cause him make this offer to a guy wanted for multiple felonies, but was confused about why Reston was not suspicious when the billionaire son of his former, hated employer suddenly showed up out of the blue at a dive bar to offer him a job.  More confusing to me was that “Legacies” uses the Reston story to transition to more flashbacks to Oliver’s time on the island.  But in this case, we get a flashback to a hallucination, rather than to actual events.  Younger, bad-hair-sporting, starving-to-death Oliver imagines his late father appearing in his cave to browbeat him about the importance of surviving, and demand that Oliver “right my wrongs.”

Reston turns his sons into criminals and Robert Queen turns his son into a vigilante, but “Legacies” doesn’t do enough with this parallel.  Is Robert Queen’s redemptive mission for his son potentially as destructive and short sighted as Reston’s?  That’s not the case ARROW seems to be making this week, but it’s an idea that could be developed a lot more and the show would be better for it.  Robert Queen committed crimes and heavy-handedly convinced his only son to give up his life, and risk it daily, to clean them up.  Now we see him scold his son from beyond the grave to stop whining and start avenging.  Oliver should resent the hell out of the old man for this, even if in a twisted way Oliver relishes his new quest because it gives his previously shallow, empty life some purpose.  Maybe that awful paradox should make him resent the old man even more?  But I’m not seeing that kind of rage from Oliver, and “Legacies” only touches briefly on the repression that struggles to bottle up that rage.  “Legacies” is another of ARROW’s attempts to broach the subject of Oliver’s love/hate relationship with his father, but it falls flat.  Wouldn’t it be better to go deeper into the hate?