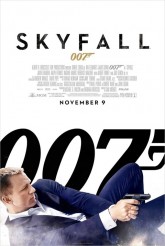 An ingenious blend of innovation and tradition

If pressed to define exactly what makes a James Bond movie a James Bond movie, as opposed to some other sort of spy thriller, not too many people would be able to give a specific response. SKYFALL, the newest installment in the chronicles of British secret agent 007, provides an answer. It may not be the only answer, but it’s definitive enough: a perfectly calibrated balance of the familiar and the surprising, definitely British and anchored by an actor who is absolutely certain that he is committed to being an agent of Her Majesty’s Secret Service.

SKYFALL writers Neal Purvis & Robert Wade and John Logan are mindful of the fact that the Bond movies have been around for fifty years, even though this is only the third outing for Daniel Craig as 007. The trick is to give the character and his world a history without making everything temporally impossible – or even distracting. The screenwriters manage to get everything to work out smoothly and consistently play with our expectations, being modern and practical when we expect fanciful flourishes and delivering on our iconic Bond touches just when we’ve ruled them out.

The title of SKYFALL refers to something within the film (as opposed to the rather abstract QUANTUM OF SOLACE, the previous Bond feature), but it’s not what we might suppose. There is no mad scientist trying to invert the atmosphere or otherwise cause the sky to fall. Instead, Bond finds himself facing off against a very adept – and uncommonly jolly, albeit brutal – foe of more or less equal skill, whose agenda is tied to recognizable human grievance. Javier Bardem plays this imaginative yet human villain with great zest and line delivery. He’s not as scary or as deep as Heath Ledger’s Joker, but they are related by a sense of playfulness overlaying fury. It’s a strong concept and it works terrifically here.

The action zips from Turkey to London to Macau to Shanghai to Scotland, with gorgeous cinematography, splendid production design and a lot of very impressive stunt work. Craig has a fierce physicality, and though we know intellectually that a stuntman doubles him in the tricky bits, he convinces us that his Bond is able to perform these feats – the fights can sometimes be spectacles, but they come off as legitimate rather than camp.

Much of SKYFALL revolves around Bond’s boss M (Judi Dench), who is contending with chaotic sabotage and official pressure. So far, no performance in a Bond film has garnered an Oscar nomination, but Dench’s work here may change this. Other cast highlights are Ralph Fiennes as a very efficient government man, Naomie Harris as a cheerful MI-6 agent, Ben Whishaw as a tech wizard who refuses to be intimidated and Albert Finney as an avuncular presence.

Director Sam Mendes (of AMERICAN BEAUTY) handles character progression and explosions with equal dexterity. The result of his collaboration with the screenwriters and cast, particularly Craig and Dench, is that SKYFALL comes off largely as its own movie rather than simply the latest entry in a famous franchise.