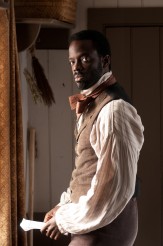 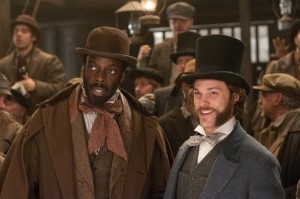 Actor Ato Essandoh (pronounced Ah-toe Eh-SAN-doh) hails in real life from Schenectady, New York, so he has his home state in common with his character Dr. Matthew Freeman on BBC America’s original drama series COPPER, which has just been renewed for a second season. In 1864, with the Civil War still raging, an African-American medical doctor draws suspicion from a lot of whites, while Freeman’s continuing association with two fellow Union Army veterans, Kevin “Corky” Corcoran (Tom Weston-Jones), who is the cop of the title, and Robert Morehouse (Kyle Schmid), draws unease even from Freeman’s loving wife Sara (Tessa Thompson).

Essandoh, who was recently on DAMAGES and TREME and has the feature film THE DISCOVERERS about to come out, talks about playing Freeman – and working with Quentin Tarantino.

AX: You’ve said you had some concerns at the beginning about the authenticity of having an African-American medical doctor practicing in 1864 …

ATO ESSANDOH: Right. Unfortunately, because of the history of our country, the first stuff that I had in my mind when they said there was a black doctor in 1864 was, “That’s impossible.” But when I did my own research, there were six or seven doctors in New York, [at that time] and the first doctor, if I’m correct, at least in New York, was James McCune Smith, who was educated in primary school in New York, but then had to go to Glasgow, Scotland, to get his M.D. and so forth, and then come back and practice in New York. So that’s where I based my character’s reality on.

AX: Were you concerned that COPPER was going to be a whitewash of how African-Americans were treated in the North during and immediately after the U.S. Civil War?

ESSANDOH: No. Because of how gritty it was, and because Dr. Freeman’s wife Sara is dealing with the repercussions of a lynching, I thought, just responsibility-wise, that they could not possibly whitewash over that. If you say lynching, then you’re going to have to follow through. I knew it was a Tom Fontana thing, and I’d watched a lot of his stuff, and he never pussyfoots around with any of that stuff, so I wasn’t worried about that at all.

AX: Do you feel that the show dealt appropriately with the lynching and Freeman’s reaction to it?

ESSANDOH: It’s still developing, but yeah. Tessa Thompson, who plays Sara Freeman, is doing an amazing job of dealing with basically the PTSD of the trauma that she went through, so definitely that is being discussed and explored. All of these stories are peeling away like the layers of an onion, so it’s really awesome to watch how it’s going forward.

AX: Apart from finding that there were American black doctors in the 1860s, did you do any other research, and was that research helpful in playing the character?

ESSANDOH: Most of the other research I did was basically trying to get an idea of what 1864 basically smelled like, what it felt like, and it was – I think Dickens put it – it’s the most filthy place on Earth. Maybe modern-daySomalia now, it’s probably the same thing, where literally when a horse died, they would just leave it out in the street and let it rot. Knowing that, and also knowing that that was an everyday occurrence, that sort of got me into what the role needed to be. You needed to have a sort of hard heart in being able to play these characters.

AX: As far as doing dissection or medical treatment, did you do any research into those aspects of the character?

ESSANDOH: Yes. A lot of the episodes involve me doing some different experimental tests and some different science, so I would do a lot of thorough research on that. I also have a chemical engineering degree, so that finally came in handy, much to the pleasure of my parents [laughs]. But I already had a little bit of experience with that stuff. And then I just did a little more research to refresh my memory.

AX: How did you go from chemical engineering to acting?

ESSANDOH: [laughs] That’s not a typical path. A girlfriend of mine, while I was in college, dared me to do a play. And I did the play, and I fell in love with it, and I still got my degree [in chemical engineering], but I started saying to myself that maybe I wanted to be an actor. So I explored that for awhile, and then I just made the leap.

AX: Had you played a doctor before playing Dr. Freeman?

AX: Had you ever played a soldier before?

ESSANDOH: Yes, I have played a soldier, a few times, I want to say. In theatre and on TV as well.

AX: Did that experience inform Freeman at all?

ESSANDOH: No, because the soldier that I played – I did a part in David Rabe’s STREAMERS, and that character that I played, he’s a psychopath, so the only thing that I could garner from that role is that there still is that unspoken bond that happens between soldiers and fighters. So that’s the only thing. Everything else, not so much [laughs].

AX: And in STREAMERS, it’s a pretty frayed bond.

AX: Freeman’s background is that he fought with Corky and Morehouse in the Union Army. Do you work differently with the two of them than you do with everybody else in the show?

ESSANDOH: Yeah, because I’ve actually worked in [real life] with veterans before, and what I’ve garnered from that experience is that there is an unspoken bond that forms that transcends race and gender and creed and everything, when you’ve fought in war and you’ve risked your life with somebody else. So I think the bond between Corcoran, Freeman and Morehouse is something that is almost unspoken, it’s almost like there’s a warrior code there. But when they come back to civilization, as it were – what’s a good way to put it? – they still have to fall into the archetypes that we all have to fall into societally. But there still is that bond that they share, that weird friendship that they have.

AX: So are you playing the scenes with them on two levels, the societal level and the bond level?

ESSANDOH: Absolutely. There’s the warrior bond that we have, and then there’s the fact that I’m black, Corcoran is an Irish cop, Morehouse is this rich bon vivant, and so the three shouldn’t ever be in the same room ever, and even when they are in the same room, those traits will naturally come out.

ESSANDOH: My character lives under a lot of pressure, because basically by the way he looks, or what he is, he could be lynched at any time. The period just after the draft riots was very dangerous for African-Americans, especially in a predominantly Irish and German society. So Freeman still has to walk a very eggshell-ridden line, because one misstep and not only does he risk his own life, but his dear love Sara’s life, which is the most important thing to him in his world.

AX: The Martin Scorsese movie GANGS OF NEW YORK deals with some of the same period and place. Did you watch that for reference at all?

ESSANDOH: No, I didn’t, because I feel like GANGS OF NEW YORK is just a little small snippet of the scope that we’re trying to cover. GANGS is one part of it, but we’re also trying to do all of the stratifications of society that existed, that primordial ooze that’s just sort of the nascent New York that’s all coalescing to what we now enjoy as the modern New York City. This is the early period of it, and so I guess what I’m saying is, the scope is bigger than GANGS OF NEW YORK is.

AX: Is there anything about the COPPER set that informs your performance

ESSANDOH: Absolutely. The set makes everything easy, because [production designer] John Blackie took every single detail – there’s nothing that’s missed. They made their own cobblestones. If you walk into a room, and there’s a drawer and you open the drawer, there’s stuff in the drawer that looks period and you can actually play with, so he’s made our jobs infinitely easier just from that fact. So the set definitely helps.

ESSANDOH: Yes. I have a nice little part in DJANGO UNCHAINED, the Quentin Tarantino movie.

AX: How was being directed by Quentin Tarantino?

ESSANDOH: It’s awesome. He’s like a big kid in the best way, because he is so happy and he’s so energetic, and he wants everybody to do so well and he jokes around, but he knows what shot he wants, he gets it and you’re having a great time. So he was one of my all-time greatest experiences working in this business. Quentin Tarantino’s amazing.

AX: Anything else you’d like to say about COPPER?

ESSANDOH: I think we’ve done a great job, I’m very proud of the work, so I hope everybody loves it and watches it over and over again, because I do. I love it.