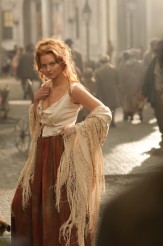 COPPER has a really nice pacing to the storytelling of this series. I like that mysteries carry over from week to week, but they get wrapped up just the same within a reasonable time period.

“Husbands and Fathers” is an appropriate title for this new episode, even if a lot of the connotation of the title is creepy … just plain creepy. Annie (Kiara Glasco) has her story continue this week and spin out in some interesting directions. We find out that Contessa Popadou (Inga Cardranel) is not the first person to turn Annie into a whore, but rather Annie’s “father” comes to collect her and we find out he’s really her husband. Ewww. The fact that it was legal at that time to marry a ten year old girl is f**ked up!

Also following on the heels as part of this mystery, Haverford dispatches a few goons to rough up Detective Corcoran (Tom Weston-Jones) and they help him break a leg. This only adds to the amount of hatred for Haverford from last time. Not only does Haverford get his in this episode, so does Cotessa Popadou and in the nicest way possible.

I love the fact that Morehouse (Kyle Schmid) and Elizabeth Haverford (Anastasia Griffith) conspire together to also take land holding and property away from the sinister and decadent Mr. Haverford. Morehouse is an intriguing character and I am eager to see how he grows as this show continues.

Now that Popadou is out of the picture that leave a vacancy in the whorehouses of NY. Wonder if Eva (Franka Potente) might be moving on up and taking over the higher rent house of ill repute? She already has the police connections and I would assume she has a lot of revenue socked away, so maybe she’ll be in the lap of luxury before too long.

The man Corcoran was looking for last episode resurfaced this week, but much to the detective’s chagrin, he knows nothing about the wareabouts of Corcoran’s wife and who killed his daughter. So this is still a mystery for another day.

Sara Freeman (Tessa Thompson) proves in this episode that she’s not going quietly into the night, and she will not be drug out into the street and murdered like her brothers. I want to see her get even more of a backbone and start venturing outside the home. I have a feeling we are only just starting to see the strengths and depths of this character.

BBC America has a really strong period series here. The storytelling, visuals and acting are all nicely balanced and it’s a show that holds my interest. There’s just enough mystery to keep you coming back to find out more, and there’s enough violence, and drama to keep you satisfied from episode to episode.

Related: TV Review: COPPER – Season 1 Premiere – “In The Hands of an Angry God”