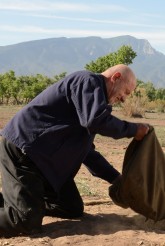 Walter White’s transition into “Heisenberg” is complete, and his pride and ego claim another victim.

“Say My Name” is a pivotal and gut-wrenching episode of BREAKING BAD, and one that answers many of the questions that have been building since the season began.  Questions such as:

In Mike’s (Jonathan Bank’s) memorable turn of phrase, just because Walt shot Jesse James doesn’t make him Jesse James.  But the opening sequence of “Say My Name” says otherwise.  Walt, Jesse, (Aaron Paul) and Mike meet the crime boss Declan (Louis Ferreira) in the desert to negotiate the sale of their stolen methylamine.  But instead of Mike doing the talking, Walt, someone Declan has never met before, fearlessly makes his pitch for a new deal, which involves him keeping the methylamine, Declan firing his current cook, then Declan taking over Mike’s role in the distribution end of the business. With Declan’s crew selling Walt’s higher quality blue product, everybody will get richer than they would otherwise.  Additionally, Walt wants Declan to pay Mike $5 million dollars for his efforts, on the spot.  Not only does this arrogance not get Walt killed, but he gets everything he wants from the negotiation and also gets Declan to acknowledge that, even if he doesn’t know Walt’s face, he already knows him by reputation. He knows him as Heisenberg.   Walt has never appeared more confident, or more proud of himself.

Does Jesse still not see Walt for who he really is?

As of “Say My Name,” it’s pretty clear he does.  Walt’s mask must have slipped enough in the last episode to give Jesse the conviction to try to get out of the meth game and out of Walt’s orbit.  A nice scene in the carwash shows how attentive Jesse is to the plight of Skyler (Anna Gunn), whose misery as Walt’s wife/captive clearly factors into Jesse’s decision-making process on this issue.  However, can Jesse actually leave?  He tells Walt he wants to go, but Walt pulls out all the stops in trying to manipulate him into staying, first by offering him a “cook of his own” and the resulting profits from that, then by feigning concern that Jesse would be “squandering his potential” by leaving the business.  When those tactics don’t sway Jesse, Walt shows his true colors, by tearing Jesse down and telling him that without the business his life is fundamentally empty and that he’ll probably only slide back down into drug addiction.  The hurt reaction on Jesse’s face during this moment really packs an emotional punch, since we know Walt just hit him in his most vulnerable spot.  But Jesse fights back.  He calls Walt out when he claims he’s just as disturbed about the victims of their crimes as Jesse is.  Jesse sees now that Walt doesn’t actually care about their victims.  But Walt counter-argues, somewhat convincingly, that even if Jesse’s conscience is bothering him, it doesn’t make him any less culpable for the bad things they’ve both already done.  If Jesse truly wants out of their operation because he’s taking the moral high ground, Walt tells him that he’d be a hypocrite to also take his $5 million cut of the business on the way out the door, since their profits are the “filthy blood money” that supposedly triggered Jesse’s guilt in the first place.  To his credit, Jesse walks out without taking a dime.

Is Walt grooming Todd to be Jesse’s replacement?

It sure seems that way.  Walt leans heavily on his high-school chemistry teacher background to inspire Todd to learn how to cook meth, taking over Jesse’s role as his assistant.  And apparently Todd’s been looking for the same kind of father/teacher figure that Jesse was starved for when he first hitched his wagon to Walt, because Todd’s taken notes throughout the cooking process and, at the end, seems more interested in winning Walt’s confidence than in being paid for his work.  Todd’s appearance on the scene in Season 5 as an apparent new version of Jesse, who could plausibly serve as a new, yet conscience-free protégé for Walt to mold, has seemed a little too convenient to me at times.  And the fact that Todd’s first attempt at stepping into Jesse’s shoes is an instant success in Walt’s eyes produces that same concern.  But the functional result of Todd showing this meth-cooking acumen is that it creates an unsettling new dynamic that serves BREAKING BAD well:  A growing sense that Jesse’s in danger.  A publicly guilt-ridden Jesse who knows everything about Walt’s plans and is no longer integral to them could definitely find himself at risk.  That is, if we believe Walt is capable of doing something that awful.  Which brings us to….

Does Walt actually grasp the depths to which he’s sunk, or does he still buy his own rationalizations?

A scene where Walt nonchalantly begins to talk to Skyler at the dinner table about his day at the meth lab, and she then walks out in disgust in the middle of his sentence, seems to suggest a man who just doesn’t realize how fundamentally loathsome he is.  But the sad ending of “Say My Name” lets us see Walt’s bubble get burst a little.  In the final scene, Mike, now hunted by the DEA, takes his “Go Bag” from Walt, who’s come to deliver it to him prior to his getaway in a secluded, wooded area. Walt thinks Mike owes it to him to give up the names of Gus’s nine lieutenants who are now in prison and could potentially flip on Walt and jeopardize his business going forward.  But Mike won’t give him the names, and starts to walk away.  Walt then browbeats Mike for not thanking him for everything he’s done for him.  Of course, to Mike this notion is laughable, since Walt’s murder of Gus Fring ruined everything Mike had been working for and set in motion the chain of events that are forcing him to go on the run and abandon his granddaughter.  Mike spells out for Walt exactly what his psychological flaw is, and, in return, Walt makes good on Mike’s premonition that Walt was a ticking time bomb, and shows why he didn’t want to be around when he went off.

Mike reminds Walt that he would have made “as much money of you ever needed” as Gus Fring’s cook, if only his pride and his ego would have let him accept that position as his natural ceiling.  Mike’s condescending tone as he spits out these words shows Walt that he has never, and will never, have Mike’s respect.  And this is the awful truth that Walt’s pride and ego, ironically, can’t allow him to hear, because his reaction is to use the gun from Mike’s Go Bag and shoot him.

As Mike sits dying by a river bank, Walt tells him that he now realizes that he didn’t actually need to get the names of Gus’s nine associates from Mike after all, because Lydia has them as well.  He says, “This whole thing could have been avoided.”  Much like almost every bad thing Walt’s done since entering the meth business could have been avoided.  But obviously he didn’t avoid it, and now he knows why.

I can’t conceive of a scenario where this knowledge prompts any soul searching from Walt, however.  Clearly he knows how much of a villain he is now.  And, if his past history is any indication, his pride and ego are going to be very happy to know it as well.