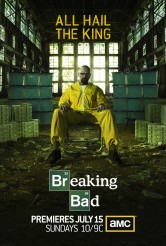 BREAKING BAD’s creator Vince Gilligan has described the remarkable metamorphosis undergone by the show’s protagonist Walter White (Bryan Cranston) as a transformation from MR. CHIPS to SCARFACE.  And for four seasons now, we’ve watched this play out in fits and starts, as Walt’s lung cancer diagnosis served as the catalyst to a chain of increasingly morally dubious decisions that would change him from an endearing family man and talented high school chemistry teacher into a vain, manipulative, and brutal crystal meth kingpin.

Since Walt had no criminal background to draw from, learning to navigate the drug trade has meant surrendering his humanity in new and creative ways each episode in order to play catch up with the hardened sociopaths who inhabit his new world.  And after spending much of last season angrily flailing about, trying (mostly ineffectually) to strike out against the more powerful criminal forces that constrained his ambitions, Walt finally scored a major “victory” in the conclusion of last season when he killed his nemesis, Gustavo Fring (Giancarlo Esposito), with a hidden bomb, and became the last man standing in the Albuquerque meth trade.  If the first episode of BREAKING BAD’s fifth season “Live Free or Die” is any indication, that bomb signaled the ultimate end of Walt’s MR. CHIPS period, and we’ve now arrived squarely in the  SCARFACE territory we were promised.

In the opening sequence, we’re shown what appears to be a flash-forward, with a bearded, coughing Walt in a Denny’s restaurant “celebrating” his 52nd birthday after ostensibly traveling there from New Hampshire under an assumed name.  This sequence ends with Walt purchasing a machine gun, and when it ends we don’t return to it.  This looks like Season five’s “stuffed animal floating in the pool” teaser, and we’re not going to learn what it means for a while yet, though it will be increasingly interesting to speculate as more clues are provided.

Then we return to exactly where we left off at the end of season four.  A brief recap shows Walt admitting he was Gus’s killer during a phone conversation with Skyler (Anna Gunn).  Walt then cleans up the evidence of his bomb making and child-poisoning from his house.  Walt’s family returns from protective custody now that the threat Gus posed to Hank’s loved ones is apparently over, and Walt follows up a tender moment with his infant daughter with an uncomfortable conversation with Skyler.  She tells him she’s scared of him.  Walt conspicuously does not try to talk her out of this belief.

Meanwhile, Gus’s enforcer Mike (Jonathan Banks) re-emerges from his convalescence in a Mexican clinic after learning that Gus has been killed.  He wants to kill Walt on sight, but Jesse talks him down.  Jesse and Walt lay out this episode’s crisis, explaining that the three of them appear on the video feed from the camera in Gus’s now-destroyed underground super lab, tying them all to his now-exposed criminal empire.  The video lives on Gus’s laptop, which the police now have in an evidence locker, and it’s only a matter of time before they view it and learn the identities of Gus’s accomplices.

Mike assumes the situation is hopeless and wants to skip town and get a head start on the authorities.  Walt’s convinced they can get to the evidence locker in much the same way he got to Gus, by building some kind of device that will destroy the locker’s contents.  Mike believes this is a fool’s errand and has zero confidence in Walt’s ability to pull something like this off.  Evidence lockers are impregnable and guarded 24-7 by cops.  Jesse (Aaron Paul) pleads with Mike to “just give him a chance.  He’s good at this stuff.” They bicker about what possible method they could employ to destroy the locker.  Jesse says “What about a magnet?”

We revisit the salvage yard from last season.  Walt, Jesse and Mike are able to procure the large magnetic crane used to hoist junked cars, and also a salvaged U-Haul truck to place the magnet in.  Their plan involves parking the truck outside the evidence locker and firing the magnet through the reinforced concrete wall to destroy all the items made of metal inside.

Saul Goodman (Bob Odenkirk) pays a visit to Skyler.  He lays out the results of last season’s attempted shakedown of Ted Beneke (Christopher Cousins), and it was, predictably, not a success.  “An act of God.  There’s no right, there’s no wrong.”   Skyler gets his drift.  “Ted’s dead?”  She asks.  Apparently not.  “He just woke up.”  This sets up an interesting moral dilemma for her, as Ted is now more of threat to her than ever.

At the junkyard, Walt and the others test out the magnet/U-Haul truck.  Mike, skeptical, has the funniest line of the episode.  “You know, I could foresee a lot of possible outcomes to this thing, and not a single one of them involves Miller Time.”  This show would not be as good without Mike.  The magnet is a success, at least in the testing stage.

Skyler visits Ted in the hospital.  He’s in a halo brace from what appears to be a broken neck.  She appears in the throws of genuine guilt and remorse, but before she can say anything to him, he states that he’s afraid for his family and would never say a thing about her to the police.  Her response?  “Good.”  She’s not so guilty or remorseful that she’s unwilling to exploit his fear.

Walt, Jesse and Mike implement their plan to destroy the laptop in the evidence locker using the magnet.  The initial magnetic field does the job, but Walt cranks up the magnet’s power to such a degree that the truck tips over and they are forced to abandon it outside the police station.  Walt assures Mike that the truck is made up of untraceable salvage parts and contains no fingerprints.  Mike wants some assurance that the plan even worked.  The plan worked, Walt says, “because I say so.”   The damage to the evidence locker does apparently destroy the laptop, but it inadvertently reveals to the cops another piece of evidence hidden among Gus’s affairs.

Walt confronts Saul about the $622,000 of Walt’s drug money Skyler had used to fund her scheme to eliminate the threat of Ted taking her down with him.  Walt coldly describes his displeasure that he was not consulted about this.  Saul engages Walt as though he’s still talking to the bumbling criminal dilettante he’d begun advising months ago, but Walt clearly now sees Saul as his subordinate.  Frustrated over the risks he’s had to take for Walt and Skyler, Saul says he wants out.  Walt backs him into a corner and says, chillingly, “We’re done when I say we’re done.”

The show’s final scene feels even more chilling, however.  When Walt returns home, Skyler informs him that she spoke to Ted and that he will not be talking to the police.  Walt embraces her and tells her “I forgive you.”  The moment is not tender – it’s frightening.  Skyler now knows she’s married to a man who kills.  His offer of forgiveness now means something different, and much more sinister, than it once did.

“Live Free or Fie” demonstrates that Walt now operates with a cold, steely confidence the show’s creators did not give him in Season four of BREAKING BAD.  His metamorphosis appears complete.  No vestiges of MR. CHIPS were visible at any point in this episode.  Walt’s not a good person anymore, and not someone whose continued success in the drug trade can plausibly be said to serve any higher good.  So where is he headed from here?  I don’t know how BREAKING BAD’s creators intend to conclude Walt’s journey in the show’s final season, but it’s probably worth remembering that Tony Montana did not survive SCARFACE.