Walt brutally removes all remaining obstacles to his drug operation and finds himself indisputably on top. So why are we seeing the softer side of Walt again? 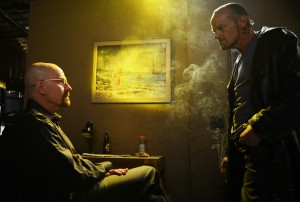 “Gliding Over All” wraps up the first half of Season 5 of BREAKING BAD, and sends us into the (suddenly all too long) break between the Season’s first and second halves asking questions we thought we’d reasonably be asking at this point anyway.  In the past 8 episodes Walter White (Bryan Cranston) has successfully risen to the top of criminal underworld in the Southwest, become a ruthless killer, and eliminated or neutralized anyone who could stop him at the street level.  By now Walt is so unlikable and irredeemable that we desperately want someone or something to bring him down, and it seems the burning question at the center of next year’s episodes will be who, or what, is capable of doing it?

The two most obvious suspects are Hank (Dean Norris) via a DEA investigation, and the perennial favorite, cancer, making a suddenly less-unwelcome comeback.  These two threats have been hanging over Walt since the series began, and “Gliding Over All” teases us with the prospect of seeing both next year.  Clearly there are also other wild card scenarios brewing, like Jesse (Aaron Paul) and/or Skyler (Anna Gunn), who know what Walt’s become and need to get free of him to ensure their own safety, taking matters into their own hands.

But two things define BREAKING BAD for me more than anything else.  1) This show is dark.  Which makes me believe that the answer to the question “Who can stop Walter White?” is, very possibly, “no one,” and Walter will end the series doomed to live as a monster in a hell of his own making, having destroyed everyone and everything good in his world.  And 2) Fate, or luck, (good or bad), has always been a huge component of this story.  The fates that have so far aligned to make Walt a success at being a bad person will one day bite back, and some random ex machina event that no one sees coming will arrive on the scene to take Walt out.

In the meantime, here’s a list of some of the other intriguing questions that “Gliding Over All” leaves open for next year:

How much will this show miss Mike, and actor Jonathan Banks?
A lot.  I already miss Mike.  He made a fascinating foil for Walt and brought out Walt’s vain, petty side every time he “pulled rank” on him, and reminded Walt of his humble beginnings with Fring’s organization.  There’s no one else left to do that.  And who else does this show have that can deliver one-liners the way Mike did?  It’s sad, but very much in keeping with the tone of the show, that Mike winds up in a barrel this week.

What role will Lydia (Laura Fraser) actually play in Walt’s life moving forward?
Watching what appears to be a close up of Lydia’s bare ring finger while she writes out the list of names of Gus’s nine imprisoned henchmen for Walt to murder comes with the uneasy sense that she’s not just a replacement for Mike in the meth distribution world, but possibly a replacement for Skyler as well.  After all, Lydia doesn’t know Walter White.  She only knows “Heisenberg,” and couldn’t care less about his crimes, since she’s guilty of the same things.  Plus, she’s as ambitious as he is, she’s a greater asset to his career than Skyler and her carwash, and deep down she’s afraid of him, and that probably suits Walt’s ego just fine.  On paper it makes sense, anyway.

Does Todd’s character, (played by Jesse Plemmons), exist solely to solve all of Walt’s plot problems?
He cooks meth as well as Jesse did, he kills witnesses without compunction, and his Uncle is a white supremacist who can murder Gus’s men in prison for Walt.  Without Todd’s arrival on the scene, Walt’s road to the top would have been a lot rockier.  Currently this character is just a cipher, but it will be very interesting if Todd ever realizes his true value to Walt and starts making demands of him that Walt doesn’t want to meet.  In fact, I’d say that some complication regarding Todd’s services must occur for me to start taking this character as seriously as I could.  Right now he seems like the perfect henchman, almost designed in a lab for this very purpose, and we always expect BREAKING BAD to flesh out its characters in much more detail.

Is Walt having an attack of conscience?
Probably not, since he orders Gus’s nine men butchered in prison in this episode and doesn’t bat an eye at the news report about it, even while cradling his infant daughter.  But the scene where Hank comes home from work in a depressed state and discusses, nostalgically, his old job tagging trees in the woods with Walt is telling.  First, it’s telling that Walt is there at all, because in all likelihood he’s mostly at Hank’s house to bask in the glow of Hank’s frustration and see the effects of his own bloody handiwork in thwarting the DEA’s potential case against him.  But also it’s telling when Walt’s reaction to Hank’s nostalgia appears sympathetic, and he says, wistfully, “I used to love to go camping.”  We realize he’s likely talking about cooking meth in the RV with Jesse, and not camping in some other context.  Both men’s heads are now heavy with their respective crowns, and while neither is seriously rethinking their position in the world, they both long for a simpler time in their lives.  We see this with Walt immediately, because the music montage that follows, where Walt cooks and distributes his meth and collects his cash to the tune of  “Crystal Blue Persuasion” (and which apparently spans 3 months time), appears lonely and exhausting.  And the subsequent scene where Skyler shows him the mountain of money he’s made, too big to even count, and “more than they could spend in ten lifetimes,” perhaps has Walt questioning the logistical demands of his enterprise, even if he’s not concerned about the moral ones.

Will Jesse ever get it together?
I wouldn’t bet on it.  In the absence of some father figure who can push him onto a straight and narrow path, the guy seems completely at a loss as to what to do with himself.  And no character with that quality has been introduced yet.  Jesse seems destined to head back into Walt’s orbit in some capacity, but we’ll know a lot more when we see what he does with that $5 million dollars Walt gives him.  The scene between them does showcase a genuine affection between the two men, and the fact that they’re both caught up in the nostalgia about the RV together means that it’s more difficult to imagine the two of them truly ever going their separate ways.

Is Walt really “out” and, if so, can we be made to like him again?
It’s hard to imagine Lydia or Declan wanting to allow “Heisenberg” to just abandon his role in the operation that’s making them rich and powerful.  So presumably his departure from the drug business would not be seamless, or without risk.  But, if he was able to leave, could we be made to like him again?  While the first half of “Gliding Over All” shows Walt at his most inhuman, the last half tries its best to re-humanize him.   Taken by themselves, the experience of seeing Walt prone and helpless in the MRI machine, the return of the smashed-in paper towel dispenser in the hospital bathroom, the tender moment with Skyler at the kitchen sink when he tells her he’s out, and his olive branch offering to Jesse, are curiously effective in tapping, if not tugging, at the heartstrings, and, if nothing else, do create a sense of nostalgia.  In my case, that last fifteen minutes of the show made me want to re-watch previous seasons in order to re-acquaint myself with the old, likeable Walt as a palate cleanser.

Would getting the old Walt back make us root for something other than his downfall at this stage, however, even after he’s left a trail of carnage in his wake?  That would be a fascinating question for BREAKING BAD’s creators to pose to its audience next year.  And, while I hope the answer is “no,” part of me knows better.  That’s why I suspect when BREAKING BAD finally ends, we’ll feel satisfied, but also like we’ll never totally get a handle on our conflicted feelings about Walter White.  Which is why this is such a great show, and why I’ll miss it so much over the next year.