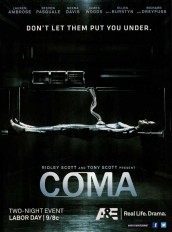 When you name your mini-series COMA, you better deliver a suspenseful, taut thriller, otherwise, puns from journalists reviewing it will be aplenty.

So yes, here’s one coming now – COMA puts you to sleep.

Yes, the first two hours of this mini-series airing on A&E is a complete bore. The script is sluggish, the scenarios ridiculous and the pay-off (which finally happens during the last ten minutes) is a little too late to stave off boredom.

Based on the Robin Cook novel (which was previously made into the far better 1978 film starring Michael Douglas), this mini-series updates the book with cell phones and other modern technology but the guts and bolts is the same.

Susan Wheeler (Lauren Ambrose), a first year resident discovers the hospital she’s interning at is harboring a deep dark secret – many patients (too many actually) are ending up in comas after simple procedures. As she begins to snoop around, she gets to the truth that these patients are being shipped off to a special care facility that is doing more than just keeping them plugged in.

The two-hour premiere takes forever to get to the final pay-off (which as an audience knows what’s coming). With that knowledge, it feels like perhaps this mini-series could have been condensed to a solid three-hour film, not extended to a four hour, two-night event.

It’s clear from the moment Susan arrives at the hospital that there’s something fishy going on, so the sense of discovery and sense of dread is immediately sucked out of the room. And everyone is clearly a baddie or some form of it, so the idea that there could be someone on Susan’s side is a moot point too.

The script by John J. McLaughlin is pretty bland, and even with such amazing actors in key roles (James Woods, Joe Morton, Ellen Burstyn, Richard Dreyfuss, Geena Davis) they’re given very little to work with which is shocking. With this kind of talent, this movie should be crackling with memorable dialogue and scene chewing moments, yet most of the time it feels like a second-rate medical version of LAW & ORDER where Susan goes from point A to Point B, very quickly and with nothing else holding it together.

While I’m hoping the second night of this COMA miniseries wraps things up and amps up the tension and suspense, but it’s doubtful. If the first night is any indication, this series is so far a total bust. Uninspired, silly and complete nonsense, it doesn’t attempt to suspend disbelief. It doesn’t even try to be a smart medical thriller. Nope, this is just watered down pap that should have been so much more.