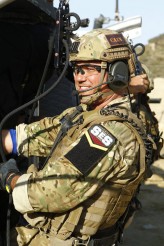 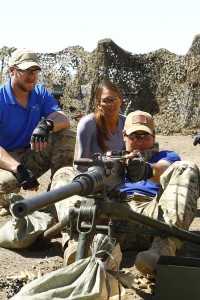 Actor Dean Cain famously appeared to do some extraordinary physical exploits while playing Superman and Clark Kenton four seasons of LOIS & CLARK: THE NEW ADVENTURES OF SUPERMAN and has been in any number of action roles since. However, in the reality competition show STARS EARN STRIPES, which has its first-season finale Monday at 8 PM on NBC, Cain is put through the action wringer for real.

The format of STARS EARN STRIPES is that, at the outset, eight celebrities are each matched with a military/law enforcement specialist (Navy SEAL, SWAT and the like) to go on missions designed for the show. While the objectives are invented and there are no actual enemies, the physical maneuvers, the tactics and the weapons are real. Cain is one of only three of the starting eight to make it to the final night.

At a party thrown by NBC for the Television Critics Association poolside at the Beverly Hills Hotel, Cain emerges from a photo tent – having just had his picture taken “with a Navy SEAL and a SWAT commander” to talk about what he’s done and what he’s learned on STARS EARN STRIPES.

ASSIGNMENT X: It seems like you’re bouncing back and forth between scripted and reality series now. You just did the dating show THE CHOICE …

DEAN CAIN: THE CHOICE was a lot of fun. [Reality series are] brand-new for me, but yeah, that is happening at a moment.

AX: Is this the most physically difficult thing you’ve had to do in the course of a job?

CAIN: It’s definitely the most mentally difficult thing I’ve ever done in the course of a job. You have to get over certain things like jumping out of a helicopter two hundred feet above the ground attached to a rope. There’s a certain fear factor that is in there that you’re not used to doing – your body says, “I shouldn’t be doing this.” And you have live weapons, and there’s so much danger involved. So yeah, it was a whole different ball of wax. And the thing about how these guys face these situations in real life, people shooting at them, it really blows you away.

AX: Now, you’ve played a lot of military and law enforcement personnel, and obviously you’ve talked to a lot of those people, especially when you do morale tours for the troops, but how was it actually working with them?

CAIN: Working with the real guys was ten times more rewarding than playing one. To go for missions with these guys, train with them, sweat with them, bleed with them, the whole nine yards, was absolutely amazing, and my respect for them has gone through the roof. Also, there’s a funny saying kids have when they go to college – “I went away to college and came back and my parents got so smart.” I went to work with these guys and didn’t realize how much I didn’t know. I mean, they taught me things I thought I knew were correct about the guns, gun safety, military situations, and I realized that I really don’t know anything. I realized that early on and I just said to my operative, “Listen, I’m going to come in a blank slate. You tell me what to do, that’s what I’m going to do.”

AX: Did you have any fears, maybe not so much for your own physical safety, but for the physical safety of others as far as when you were working with the guns? I mean, were you worried, “If I don’t hold this straight, if I go two inches to the left, I might hit the sound man”?

CAIN: Safety was Job Number One. We were really very conscious of the fact that we had live fire. We had great safety people with us, but any time you have live fire and automatic weapons and explosions and pyro [pyrotechnics] and helicopters and water, things of that nature, anything can go wrong at any time. But the trust that we have in our operatives is a hundred percent. I put my life in the hands of my operative multiple times every day and I just know that that guy is so well-trained that he would save me if something happened. There were three specific instances that I can’t speak of yet where he did actually do something that prevented me from making a bad mistake or prevented someone from getting hurt or killed. And that happened for every single person.

AX: A lot of times when people are involved in very challenging physical situations, they say something like, “I found I had muscles I didn’t even know that I had.” I know that you’re in very good shape anyway, but –

CAIN: Not compared to these guys.

AX: Did you have that moment of thinking, “Wow, I didn’t realize my body did that”?

CAIN: I was sore in places that I didn’t expect, that’s for sure. But more than the physical challenge, I think all of us came in relatively physical fit. Literally, having done it, I would have trained for two months. Now that I know what I was going to go through, I would have trained for two months straight and dropped about twenty-five pounds before I started this. I would have gone as light as I possibly could for this particular show. But the mental challenges were much more difficult than the physical challenges, [like] the mental challenge of stepping over the ledge of an eight-story building on a rappel line. There’s a moment where you step over and you better control yourself and be smart enough to know that need to control yourself, or you’re going to get hurt. If you jump out of a helicopter at three hundred feet in the air attached to a small rope, there’s real trust that you have to put into other people, and it’s hard to let go and trust that someone’s going to be on that rope for you. And that happened every single day.

AX: So this is much more than something like doing your own stunts …

CAIN: I giggle at doing my own stunts after something like this. I mean, we were doing our own stunts all day, every day with live weapons and really dangerous situations. You have to pay attention [to what you’re doing] as a competitor and as a teammate and as an operative, so yeah, it’s a whole different ball of wax. There’s no Take Two, there’s no stuntman, it’s as real as it gets without being shot at.

AX: Does this make you more or less inclined to do other types of reality TV?

CAIN: You know, I’m not particularly a fan of reality television. I mean, it’s fine, but it’s not really my cup of tea. What I really enjoy about this is, we are shining a light on our men and women in the military, in the armed forces and our first responders and law enforcement and saying, “These people are incredibly amazing. Here are some real-life people who do it. Take a look at their faces, hear their stories and then see how difficult their job really is, and really appreciate what they do for us. And then say thank you.”

AX: Do you feel like this equips you better the next time you play one of these people?

CAIN: Without a doubt. It equips me a hundred times better than I’ve ever been equipped.

CAIN: I currently have two series. One is called BOUNCE – it got picked up by VH1. It’s a one-hour drama – I play the head coach of a professional basketball team. It’s sort of like BLACK SWAN with a dance team. The Los Angeles Lakers [have] dancers called the Laker Girls. [On BOUNCE], we have the L.A. Devils. There are dancers called the Devil Girls. The Devil Girls are extremely famous. They’re known to be just a killer dance team, and to make it as a Devil Girl, as a dancer, you’ve made it. The girls who are in this as dancers are like Beyonce’s backup dancers, global gymnasts – they’re amazing. I would put them up against any dance team and say, “Let’s go.” I play the head coach of the basketball team, and it’s very intertwined, my life and the dancers’ lives and my ex and some people. It’s a lot of fun for VH1, one-hour drama.

AX: And anything else we should know about STARS EARN STRIPES?

CAIN: I think it’s an incredible show, I’m more than honored to be a part of it and I hope people watch it, and then they turn around and say “Thank you” to our men and women in uniform, in law enforcement and our first responders.