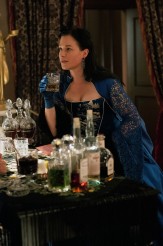 Exclusive Interview: Franka Potente is the COPPER whore with a heart of gold … sort of

The new BBC AMERICA series COPPER is gaining critical and audience attention alike. The show set in New York in 1864 is a smart blend of period drama, police procedural, lots of action, and even some educational references. Detective Kevin Corcoran (Tom Weston-Jones) is a man with a tragic past that includes a murdered daughter and a wife that has gone missing while he was off fighting in the Civil War. 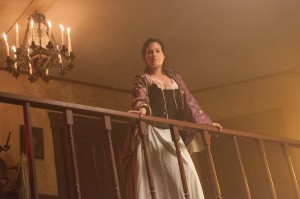 Even though Corcoran still has a wife out there somewhere, he has needs that more often than not are fulfilled by Eva Heissen played by the lovely Franka Potente (from the BOURNE film series). Eva is the Madam of a working class whore house, but she has lots of plans and aspirations towards a big and better tomorrow.

ASSIGNMENT X got the chance to chat with the woman who keeps her detective happy, and learned a bit more about the motivations behind what Eva does and what sort of plans she may be laying in this first season.

ASSIGNMENT X: So just judging from her attitude in the first episode, I would guess that Eva has a lot of plans?

FRANKA POTENTE: I can’t talk about certain things, but yes you are right.

AX: Is Eva going to have a lot adventure and intrigue as the show progresses?

POTENTE: I think we’ll see by episodes three and four that she is diverse. She is a motherly figure to all of the girls and I think she takes that role very seriously. She is also a businesswoman and an entrepreneur in a very contemporary sense. I think she really loves life. I think she likes everything around her.

AX: And all of the things that life brings to her?

POTENTE: I think in her life if there is an opportunity and if you smart enough to grab it, even if you might get killed trying to make it happen; she’s not afraid to just do it. She has a lot of men coming through her bedroom, so she hears a lot of things.

AX: She’s a woman that has her fingers on the pulse of the city, and it seems she is in a unique position to know opportunities that are coming around the bend that other characters on the series may or may not be aware of.

POTENTE: I have experienced something like this too, and I think it’s even more present in this time period the series is set in. When you’ve crossed the Atlantic there’s a sense of there isn’t anything I can’t do! Especially in the late 1800’s. She’s fearless and she doesn’t have any kind of family really. She’s just a single planetary mass that likes to drift and occasionally latch onto things. That’s what’s driving her. It’s the need for family.

AX: Is it a need for stability?

POTENTE: [Pulls a face] I don’t know that she knows what that is. She’s looking for someone who understands her. I think she’s a rock star at heart, but she still wants companionship. She’s partly found it in Corcoran (Tom Weston-Jones) even though they come from completely different backgrounds, but she would never admit that.

AX: Does Eva know all about Corcoran’s dead daughter and his missing wife, and how does she reconcile that past with the feelings she might have for him?

POTENTE: Oh yeah, he babbles to her about it all the time, but she would never admit that she has feelings for him. She would never admit it. She worked as a whore for so long that it’s one of the main rules that you don’t get involved with the customers. From a business point of view she’s smart than that. I think she has a lot of respect for him. Besides she’s had a lot of idiot douche bag guys that have landed in her bedroom, and she admires that Corcoran is so upstanding.  I think she is more emotionally involved than he is and she knows that so she will never tell him.

AX: So from everything we’re discussing it sounds like by the end of the first season Eva might be a very powerful woman, and she’ll have a lot of secrets which is also a form of power.

POTENTE: The sky’s the limit! Knowledge is power as well. She’s not necessarily an educated woman, but I believe that knowledge is power and she is gathering lots of knowledge. These days, and in the time period the series is set it was certainly true that being oblivious to certain things gives you an advantage. The people who make money are the ones that can ignore things and have a cold heart when it comes to some things, because you have to. They are willing to make sacrifices because it will get them somewhere.

AX: So let’s talking about the costuming on this series. In the first episode you are wearing corsets and garters and stockings, but in teasers for upcoming episodes you get some more lavish costumes. Did you have problems sitting or moving around in more confining outfits or did they put you on a leaning board when you weren’t shooting?

POTENTE: That’s not how I roll. [Laughs] I just loosened the corset whenever I need to sit down. I promise you and challenge any man, I can pee faster with a hoop skirt that it would take a guy to just go standing up! It depends on how you get used to the costumes. You can squeeze them and bend them without hurting them, people back then did it so we can too! I think Eva likes fashion, and I talked with the costume designer that she has tons of nice silks and furs that sailors have brought her each time they’ve come back to port. That’s how they pay her.

AX: Eva is traveling in episode two, so will she be back for three?

POTENTE: You will have to wait and see, but what she brings back from New Orleans is very worth it!