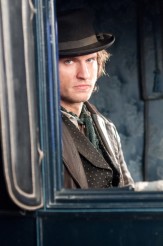 A promising start to a well-produced period police drama!

So BBC America is now getting into the period drama game as well as networks like A&E and AMC, with their new show COPPER. Set in the Five Points slum area of New York in 1864, this ambitious series chronicles the lives of a group of policemen and the people that are part of their world and everyday lives.

I like this series for the simple fact that is well done period television. Like other shows (i.e. DEADWOOD, HELL ON WHEELS) this production has spent a fair portion of money on sets, costumes, props, and all of the other elements that firmly establish this in the period it is set.

Similar to HELL ON WHEELS, our leading man Detective Kevin Corcoran (Tom Weston-Jones) is a man with a tragic past that includes a murdered daughter and a wife that has gone missing while he was off fighting in the Civil War.  Corcoran’s right hand man is Detective Francis Maguire (Kevin Ryan), who was unable to fight in the war due to a milk eye, but he covers Corcoran’s back when they are on the mean streets of NY. Both men are rough and tumble, and it’s obvious from the first episode that this form of police investigation is a LOT different than any kind of modern police drama on TV.

Corcoran has a madam on the side by the name of Eva (Franka Potente) who gets him through the cold and lonely nights, and she has plenty of plans of her own besides running a cat house. Eva is definitely one to watch as she seems to have a finger on the pulse of Five Points, and I am willing to bet that she will become someone in power on down the road.

This first episode, “Surviving Death” deals with the murder of a young girl that Corcoran sees on the street in the beginning of the episode and because of that random encounter he is drawn into the case in a more personal way. What he uncovers is twisty and turny and it is certainly not resolved by the end of the episode.

In his quest for answers Corcoran consults Dr. Matthew Freeman (Ato Essandoh), an African- American Doctor also living in the Five Points. Dr. Freeman is already proving to be something of a forensic pioneer in this first episode, and it’s really fascinating to see how he goes about determining cause of death and the implement which cause the death in this first case.

There’s a lot going on in this first episode, with plenty of material being dropped here and there to continue stories into future episodes. I can tell that this is going to be something of a complex show that has to be watched every week otherwise you might miss something really important to ongoing investigations.