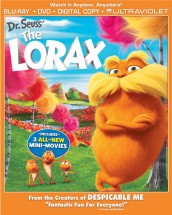 Translating Dr. Seuss’ wicked children’s books into live action or animation for that matter has not been an easy task. Perhaps the only time it’s been done correctly is the 1966 animated Christmas special of HOW THE GRINCH STOLE CHRISTMAS!

The live action feature incarnation of the story failed, and even the recent CGI animated HORTON HEARS A WHO was a little undercooked.

Thankfully, DR. SEUSS’ THE LORAX has broken that curse. A wonderfully twisted CGI animated film, it takes the Dr. Seuss text and then colors in between the lines to create a fun story with an environmental message to boot.

In the town of Thneedville, all real trees are gone and replaced by the synthetic greenery. Since trees produce oxygen, that matter has been taken care of by the nefarious Aloysius O’Hare who markets fresh air to the citizens.

12-year old Ted though wants to find a real tree to impress the girl he has a crush on and it takes him out of the city and into the no man’s land once known as Truffula Tree forest. There the Once-ler destroyed the trees and wild life with the production of his “Thneed”. He did this, despite the creature known as the Lorax (who speaks for the trees) trying to stop him.

There are many story layers going on in THE LORAX and those were clearly necessitated in expanding the children’s book into feature length, but all the additions are actually quite good and the musical numbers providing some snappy and catchy tunes as well.

THE LORAX can be a bit heavy-handed at times, but the source material was too. If you can overlook that one little thing, then THE LORAX is fine and fun family entertainment.