The actress/producer also talks a new documentary on Glen Campbell 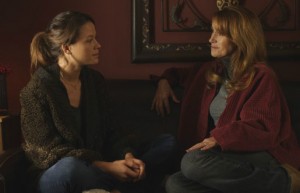 Jane Seymour is one of Hallmark Channel’s go-to stars (and sometimes producers) for its telefilms. Often, Seymour– still famous for her years as the title character on DR. QUINN, MEDICINE WOMAN – is cast in lighter fare, but this year, she starred in Hallmark’s drama LAKE EFFECTS. It aired on the network earlier this year and just came out on home video.

At a press function, Seymour takes a few moments to discuss the piece, as well as her other projects as both actress and producer.

ASSIGNMENT X: What is LAKE EFFECTS about?

JANE SEYMOUR: LAKE EFFECTS is a mother/daughter piece about a mother and two daughters. I play the mother and Scottie Thompson and Madeline Zima play the daughters and Jeff Fahey plays the father. And it was shot at Smith Mountain Lake. What’s really interesting is, the people who funded it, the people who made it, had never made a movie before. And it was really a labor of love and it ended up in exactly the place it needs to be, on Hallmark Channel. Basically, it’s a relationship piece – it’s all about choices in life, choices that you make, and sometimes you’re misunderstood by your children. And it’s about sisters and how they don’t understand why one made one choice and the other and it’s about secrets that you have that are misunderstood. Which really doesn’t tell you too much [laughs], but it’s a really wonderful, beautiful movie about relationships.

AX: So Hallmark picked this up, rather than producing it in-house. Do you know if that’s unusual for them?

SEYMOUR: I don’t know, but I think it must be.

AX: You’ve had sort of a run of playing mothers lately.

SEYMOUR: I am a mother!

AX: In real life, but is playing mothers something that you like to do because it feels natural to you, or are there other satisfactions?

SEYMOUR: I’ve done other things where I’m not playing mothers, but yes, obviously, it comes naturally to me. I have six children, so I appreciate it.

AX: Do you have a preference between comedy or drama, or do you like to go back and forth between them?

SEYMOUR: I go back and forth. I have four things [coming out in 2012]. LAKE EFFECTS is a drama. Then I have AUSTENLAND, which was made by the people who made NAPOLEON DYNAMITE – it’s a comedy. I have a romantic comedy/musical that I did, I sing and dance, which is coming out on ABC Family, called ELIXIR, and then I just did a series called FRANKLIN & BASH in which I play Peter Bash’s  [Mark-Paul Gosselaar] mother. That was highly comedic. They’re talking about having me come back.

AX: Did you get to work with Malcolm McDowell while you were on FRANKLIN & BASH?

SEYMOUR: No, I didn’t, but I do know Malcolm and I like him a lot. I got to work with everyone else.

AX: Do you have any producing projects coming up?

SEYMOUR: Well, my husband [actor/director/producer James Keach] is actually working on it – it’s a documentary about Glen Campbell and his final tour with his children and Alzheimer’s. So we’re working on that at the moment.

AX: Is Mr. Campbell co cooperating with the documentary?

SEYMOUR: Oh, yes. It was his family and his choice. It’s a great, great [project].

AX: Are you a fan of country music?

SEYMOUR: I am. I met Johnny Cash on DR. QUINN and then we ended up making WALK THE LINE [the Oscar-winning 2005 drama starring Joaquin Phoenix as Cash and Reese Witherspoon as June Carter Cash] and I’m a big fan of country music stars. I was in Nashville last week, meeting everyone and watched them at the Ryman.

AX: Are you still very happy with the reaction, both publicly and critically, to WALK THE LINE?

SEYMOUR: Oh, yeah. Definitely. And to top it off, one of my twins is called Johnny Keach, after Johnny Cash, and he was his godson, and he’s now a recording artist in his own right.

AX: Do you feel like you and your husband set an example for your kids so they’re comfortable being in the entertainment industry?

SEYMOUR: They’re free to be anything they want to be. We insist, however, on honesty, good manners, trying your best and following your passion. And so far, everyone’s gone into some area of the business, all different ones, except for one, Chris, who’s become a really phenomenal athlete [in] baseball.

AX: Anything else we should know about LAKE EFFECTS?

SEYMOUR: Just that I think it’s a beautiful movie. I did it because I loved the script. I had the most amazing time making it, and I really bonded with the two girls who played my daughters, and I think it’s in its own way a very powerful piece about the love between a mother, daughters and a family dynamic. You don’t always understand why people make certain choices. And what are the right choices to make in life? Is the choice about career or money or power or is it about happiness? And what choice is better? That’s what it’s about.