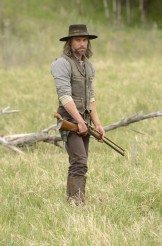 Some pigs get to eat long pig!

So I’ve compared HELL ON WHEELS to DEADWOOD in the past, as have many people. The two series are very tonally similar and they both take place in rugged, rustic western settings. So, it was only a matter of time until someone gets fed to pigs on this show. It seems like a natural thing. In DEADWOOD, Woo’s pigs were a constant place for body disposal, so it’s no big leap that pigs in this show become the same sort of thing. There’s just not a lot of the word c*****cker being thrown about as people are fed to the swine.

“Slaughterhouse” is not a good episode to eat while watching, and if you have any sensitivity towards animals being butchered onscreen you might want to skip this one all together. The episode starts and ends in the butcher’s shop/slaughterhouse and there’s plenty of gore and entrails to go around.

I knew it was only a manner of time before the Swede (Christopher Heyerdahl) was going to stir things up. I mean he picks it up for a living now, so it’s only fair to say that he likes to stir it up a bit as well. This time it’s retribution (no matter what he claims it is) on Sean (Ben Esler) and Mickey (Phil Burke) McGinnes for having him tarred and feathered at the end of last season. Of course, for their part the brothers have taken responsibility for killing the whore killer from last episode. I knew that would not end well as soon as it was brought up towards the start of this episode. If there is one law of the West, it’s that bastards have brothers (or in this case good friends) who avenge them even though they are the bad guy.

The Swede also stirs things up with Rev Cole (Tom Noonan) and ends up putting a wedge between the drunk preacher and everyone in his little ‘family”. I’m not entirely certain why the Swede is making trouble in this particular part of camp, but I’m sure it will become clear sooner or later.

Bohannan’s (Anson Mount) part in this episode is a series of awkward moments. He gets shut out by the rail crew since he was the man who was stealing their payroll, then he and Lily (Dominique McElligott) have a super awkward discussion about what he role in town is now. The elephant in the room is the fact that she is bagging Durant (Colm Meaney)…and I really wanted to hear her say she was now working ‘under’ him. Then Bohannan gets to have a chat with the Swede and starting trouble and basically tells him to knock it off or he gets to spend some time six feet under.

So yeah, then the episode ends with a person being eaten by pigs. “Nuff Said”