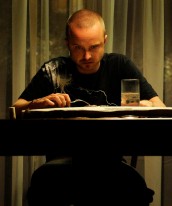 Walt is shown an opening to get out of the meth business. But he still really, really wants to make meth.

How gullible is Jesse Pinkman?  In “Buyout,” Jesse, (played, as usual, with a mesmerizing intensity by Aaron Paul), is tortured by the horrific aftermath of last episode’s train heist, and he seems to have finally realized that in order to save himself unending emotional pain, he’s got to get out of the crystal meth trade.  But will he?  “Buyout” leaves open the possibility that, whatever Jesse’s conscience might be telling him about Walter White’s (Bryan Cranston’s) potential for boundless evil; he still doesn’t possess the inner strength to truly break away from Walt.

“Buyout” also answers the question “How crazy has Walter White become?”  That answer is:  Very, very crazy.  It’s appeared for a while that what’s driving Walt is nothing more than a lust for power, but “Buyout” is the episode where this hypothesis really gets put to the test.

The episode begins with Mike, (Jonathan Banks), Walt, and Todd (Jesse Plemons), disposing of the dirt bike they removed from the site of the train robbery.  The dissection of the bike is done in an eerie near-silence, as its component parts are stripped and placed in a barrel of acid for disposal.  This was a suitably awful way to acknowledge the horrible act that’s coming next without showing it.  We know there’s a barrel waiting for the murdered kid who was riding that bike, and that his body will never be found.

Jesse’s not part of the disposal crew, though.  He wants Todd to pay for killing this kid.  Walt, Mike, and Jesse, in a post-heist review, question Todd about his actions.  Todd makes his case that “it was him or us.  And I chose us.”  Walt and Mike find this persuasive, and vote to keep Todd alive and on the payroll, to Jesse’s dismay, although Walt clearly finds it more persuasive than Mike.  Though Mike never says it, based on his demeanor, he clearly didn’t like what happened either.  We’re never quite aware how much the occupational hazards from his job, like this kid’s murder, affect Mike, but the fact that the next time we see him he’s at the park playing with his granddaughter suggests that, at the very least, he has the emotional capacity to be hurt by this stuff.  And it doesn’t help that he’s now under constant DEA surveillance while he’s at the park, meaning his career choice will haunt him in other, more practical ways, as long as he still does it.

Meanwhile, Skyler (Anna Gunn) comes close to telling Marie (Betsy Brandt) what’s going on with Walt and her home life.  She wants to do what’s best for her kids but admits, “Whatever I choose is wrong.”  She can’t bring the kids home and can’t be away from them.  Her pain appears terrible, but all her sadness and fear are suddenly replaced by a clear, burning anger when she learns that Walt’s told Hank and Marie about her affair with Ted Beneke, and made it the basis of their cover story about her emotional distress.

Walt and Jesse return to cooking meth in one of the tented houses.  As they’re finishing their lunch and watching TV, news comes on about the missing 14-year-old boy, their victim from last week, which sends Jesse into a downward spiral of guilt.  Walt, pretending to empathize, tries to talk Jesse out of it and offers a rationalization that’s perhaps the most unconvincing we’ve ever heard him give for one of his evil deeds.  He says, “In a year, year and a half, once we’ve cooked through this methylamine and made our money there will be plenty of time for soul searching.”  Spoken like a man who doesn’t have a soul to search.  But does Jesse accept this?  Walt offers to finish the cook and sends Jesse home, and as Jesse leaves he overhears Walt whistling happily while he returns to the job.  So Jesse has to know Walt’s full of it, right?

Back at the office, Mike and Jesse confront Walt when returns with the batch.  Mike tells Walt about his DEA surveillance and Walter throws a tantrum because he wasn’t told.  Then Mike tells him he’s out.  He’s done working with them.  Walt seems relieved, since it means the one major impediment to his authority is gone.  But Jesse says he’s out too.  Not only that, Mike has a buyer who will take their stolen methylamine off their hands for $5 million each.  Mike will pay their “legacy costs” out of his share of the money.  Walt can keep his share of the chemicals and keep cooking if he wants, but Mike and Jesse are going their separate ways.  Jesse points out that this is a good deal, so of course all indications are that Walt won’t go for it.

But if the original deal seemed to good to be true, it basically was.  Mike and Jesse meet with Mike’s buyer, a rival drug dealer named Declan, and discover that he will not buy only two-thirds of their methylamine, since the remaining third could be used to cook the blue meth that’s been a thorn in his side since it first appeared on the street to compete with his product.  To sell their meth to Declan, they need to sell all of it.

Jesse delivers the news to Walt that they need his methylamine too.  And, in the episode’s most jaw-dropping scene, Jesse and Walt recap the events of the past year and how they led up to this current turning point.  When Walt began his foray into meth cooking he told Jesse he only needed $737,000 to take care of his family once he was gone.  Walt now stands to make nearly six times this amount and he still won’t walk away from the meth business.  Walt tells Jesse about his former company, “Grey Matter,” and how he allowed his partners to buy him out.  He took $5,000 and the company went on to be worth “$2.16 billion as of last Friday. I look it up every week.”  Walt says he’s not in the meth business or the money business; he’s in “the empire business.”

If finally seeing the obscene size of the chip on Walt’s shoulder isn’t enough to convince Jesse he needs to get away from him, then being asked to stay for an awkward dinner with Walt and his wife should do it as well.  During dinner, Skyler guzzles wine, feeds them store-bought green beans, and wears her disgust with her husband on her sleeve.  (Albertson’s grocery stores get one of the more bittersweet product placement moments in modern TV memory during this scene, as well).  It also seems that Skyler has stepped up her passive-aggressive behavior from merely smoking heavily around Walt, (hoping to jump start the cancer again?), to being drunk during their meal and trying to humiliate him in front of his colleague by telling Jesse about her affair.   Maybe the anger that came out of her meeting with Marie was a turning point and she’s now evolving from merely passive-aggressive to actually aggressive?  Certainly she’s at her emotional bottom now and we wouldn’t expect her to stay there much longer.

After Skyler leaves the table, Walt spins this ugly dinner in a self-pitying way to Jesse.  Walt’s home life is a disaster and the meth business is the only thing he has left, “and you want to take it away from me?”

The final sequence has Walt trying to steal the methylamine from Mike and Jesse, and getting caught by Mike.  Mike will be taking Walt’s share of the methylamine to sell it whether Walt likes it or not.  Mike restrains Walt by zip-tying him to the radiator while he and Saul Goodman (Bob Odenkirk) visit Hank (Dean Norris) at the DEA offices and serve them with a (patently ridiculous) restraining order, aimed at buying Mike a day without a DEA tail so he can make the sale.  In a tense escape sequence, Walt uses science (of course) to free himself from the zip tie.

When Mike returns to the office, the methylamine is gone and Walt and Jesse are there instead.  Mike is furious, and wants to shoot Walt in the head, but Jesse (!) makes the case that “Mr. White’s got an idea.”  “You get your five million, we both do, and he gets his methylamine – just hear him out.”  The episode ends on that note, and leaves us with the sinking feeling that all of these men have just lost their only chance to escape the drug trade, and salvage whatever’s left of their souls.

“Buyout” is a strong episode because it again showcases how beyond redemption Walt is, and also because it really forces us to contemplate what’s going on in Jesse’s head.  As of now, the two characters that can see behind Walt’s mask are Skyler and Mike.  Last week’s killing of the 14-year-old boy, and the events of “Buyout” should have given Jesse a glimpse at Walt’s true face now, too.  But we’re not sure he really gets it.   Is it because he’s not bright enough to process the evidence that he’s been given, or is he still under Walt’s spell?  Does some part of him wants to believe in Walt, the steadying influence who’s often been the only one on his side during the worst times in his life?  Which makes you wonder, even if he does see Walt for who he is, what is he actually willing to do about it?