Home » BATTLESHIP Highlights this week in Blu-ray and DVD Releases 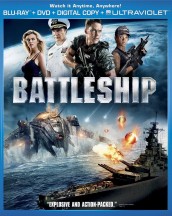 BATTLESHIP Highlights this week in Blu-ray and DVD Releases 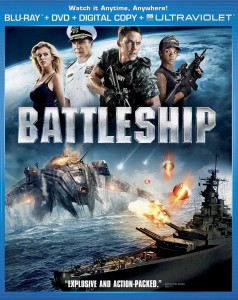 BATTLESHIP – Yes, I acknowledge immediately that the whole premise of crafting a movie after a board game is just a disastrous proposition on a whole crapload of levels. Yes, I know that the film got lambasted left, right and center by fans, the Internet, critics and more mostly even before seeing or even probably watching the film. BATTLESHIP is a fun movie. It is a very good action flick that is akin to an anti-Michael Bay TRANSFORMERS. It doesn’t take itself seriously, it plays off some of the board game aspects in subtle ways and the action is fast and furious. Plus, it is a nationalistic military film (in the vein of INDEPENDENCE DAY) that pays homage to our naval veterans in a funny and great way. While I am still not sold on Taylor Kitsch as a leading man (he does a serviceable job but it isn’t anything out of the ordinary),  is actually surprisingly good in her limited line role. Kitsch’s FRIDAY NIGHT LIGHTS’ colleague, Jesse Plemons, also provides some nice comedic relief. Liam Neeson and Alexander Skarsgard got some good billing but they play minor roles. Although Brooklyn Decker is actually not bad as the hot piece of ass that has to fight aliens.

The two-disc combo pack is the way to go with this as you get the Blu-ray and DVD version and the digital copy so you can take it with you. And in Blu-ray it looks pretty amazing with all the CGI special effects and explosions going off. There are seven featurettes included in this set as well with a special tribute to the USS Missouri that is featured in the film. I highly recommend this for those who like good action flicks and military nationalism. 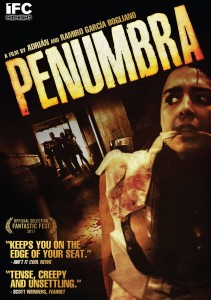 PENUMBRA – Once again the international cinema is doing a great job in delivering some high tension in the horror genre with this Spanish thriller about a rare solar eclipse and a young woman’s desperate search to get her apartment rented in Buenos Aires. Marga (played by the über hot Latina bombshell Cristina Brondo) hates the people of Argentina. Yet, her family owns a run-down apartment and she needs a tenant. When a mysterious realtor says he has a client willing to pay four times what she is asking, she jumps at the chance without thinking twice. She should have. Soon she gets involved in some weird cult behavior that wants to use the apartment for some deadly ritual involving the eclipse. I really good horror flick with a super hot lead actress and some weird sh** just going down. Check it out. 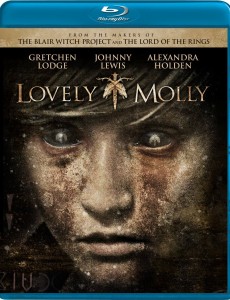 LOVELY MOLLY – Speaking of pretty good horror flicks. LOVELY MOLLY is an interesting twist on the possession/losing your mind genre of horror. After marrying and moving into their family house, Molly (played by the lovely Gretchen Lodge who gets naked quite a bit in the movie) begins to have visions of her father and horrible memories from a childhood that was less than ideal apparently. We learn that Molly not only had a drug problem in the past but has never really been that right in the head from the get-go. Lodge does a great job and is pretty fearless in her role from barring it all to really playing the psycho in a legitimate way. Now, it isn’t perfect. Much of the plot is convoluted and doesn’t make sense at times but there are some good spooky scares here. Eduardo Sánchez, who directed THE BLAIR WITCH PROJECT, has his stamp all over it with weird stuff lurking in the shadows or not seeing the whole picture of what’s happening. However, worth checking out regardless. 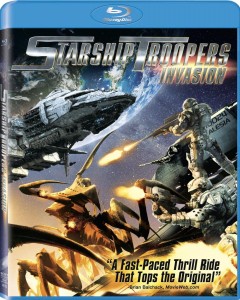 STARSHIP TROOPERS: INVASION – Do you want to live forever? Get in the fight. The franchise of STARSHIP TROOPERS continues in animated form. A massive bug attack at a federation outpost forces to starships to join forces in order to terminate the bugs and evacuate any survivors. Starring the voice over of Casper Van Dien, reprising his role has Johnny Rico, and new CGI technology used, it is a worthy chapter to the franchise that continues to be entertaining whether it is live action or animated. There is also an 11-part featurette included on the making of the movie which is always cool. 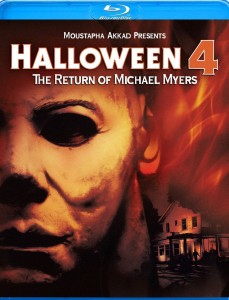 HALLOWEEN 4: THE RETURN OF MICHAEL MYERS – After what many people considered to be a terrible installment of the franchise that existed outside the Michael Myers universe in HALLOWEEN III, the producers of the franchise went back to the basics and came up with a way to bring Michael Myers back from the dead (after getting blown up in the second film). While HALLOWEEN 4 doesn’t live up to the first two installments of the series to match the tension or scares, it did return to the slasher aspect that was absent from the underrated HALLOWEEN III (that’s right, I called it underrated). While Jamie Lee Curtis didn’t sign on to star in the film, they called on a young Danielle Harris to play the daughter of Curtis’ character and object of obsession for Myers (who obviously is out to kill every member of his family). This is the first time the film has been released on Blu-ray and looks great in the conversion to high definition. For fans of the series or the film, this is a must have. 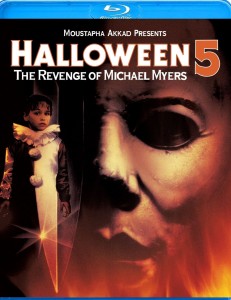 HALLOWEEN 5: THE REVENGE OF MICHAEL MYERS – Following what was a successful return to the screen of Michael Myers in Part 4, Part 5 picks up one year after the events of the previous film and is no doubt the weakest film in the series and should have been called THE DRIVING OF MICHAEL MYERS rather than the Revenge because Myers drives pretty much half the time he’s on the screen either trying to run down people, or run a cop car into another car, or doing other stuff with cars. Plus, there’s some dude that is stalking around the town and eventually gets involved in killing the cops of Haddonfield (and who would ever sign up to be a cop in the town after every cop gets brutally killed). This is the weirdest part of the film, even more than Michael constantly driving, because it has no context and there is literally no explanation at all for his role in being there or killing cops. Maybe they were planning ahead for a Part 6 but it just comes off as inexplicably bad writing. However, this is the first time it is offering high def Blu-ray and so it looks really good. 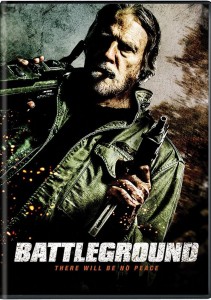 BATTLEGROUND – It is hard to cheer for anyone in this strange horror/action title. A group of thieves hid out in an abandoned shack waiting for their escape plan to take shape the next day. However, they have stumbled onto the wrong area to camp out as a crazy Vietnam vet that hates everything targets them for elimination. The vet doesn’t care about who he kills. He kills anyone and everything that comes into his realm. Whether it’s a young couple or a group of hardened criminals. So on one hand you have a bunch of people who have committed crimes that are not nice people and you have this crazy dude killing everyone. Unfortunately, it isn’t as entertaining as it sounds as the movie drags along and the budget is very low. However, if you have nothing better to do, Netflix it. 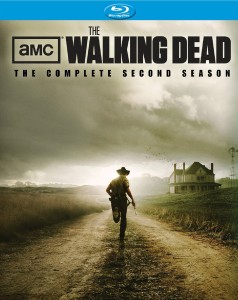 THE WALKING DEAD: THE COMPLETE SECOND SEASON – Many people complained about the pace of the second season of THE WALKING DEAD and there not being enough zombies or brutal deaths taking place as a horror television series should. However, rewatching the episodes from the second season back-to-back there is a brutal moment in every episode. Some are even extreme as the second season unfolded in the second half. Sure, the search for Sophia dragged on and on but the payoff was worth it. As were the long and dragged out speeches from Dale and the ever-changing decision from Herschel to either let the group stay on the farm or not. In the end, all of these plot point paid off in full. If you missed out on the episodes or didn’t see them in high definition, the Blu-ray version of the second season is what you need and should check out. 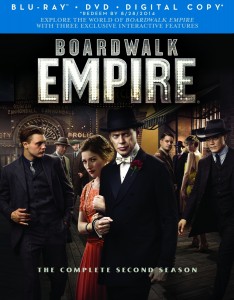 BOARDWALK EMPIRE: THE COMPLETE SECOND SEASON – HBO’s Prohibition drama makes its second debut on spinning plates with all 12 episodes collected from the second season. Steve Buscemi returns as Nucky, the crooked politician knee deep in running booze and keeping a strong-arm on everything happening in Atlantic City. In Season 2, Nucky is forced to be on the defensive as his friends turn into his enemies and he finds himself having to make new allies in order to survive and thrive in the legal alcohol trade. The Blu-ray version includes two featurettes not included in the DVD version as well as character profiles. Plus, it includes all the DVD extras that have another three featurettes, audio commentaries and more. 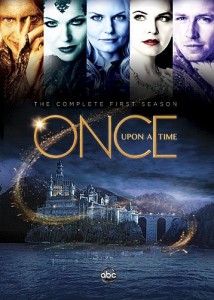 ONCE UPON A TIME: THE COMPLETE FIRST SEASON | (c) 2012 Disney Home Entertainment

ONCE UPON A TIME: THE COMPLETE FIRST SEASON – The interesting television series from ABC makes its debut on DVD with all 20-plus episodes from the first season collected here. The town of Storybrooke is an interesting village where all the fairytale characters from everyone’s childhood are frozen in time. You’ve got Snow White and Prince Charming, you have Little Red Riding Hood, Gepetto & Pinocchio, The Mad Hatter, The Evil Queen and more. Of all the television shows on the networks right now, ONCE UPON A TIME is one of the more interesting series as it is not a crime drama or a police beat drama or a courtroom drama or more. It is a genre drama that is absent of violence and sleaze that can be included in some of these shows. It has a strong cast with Robert Carlyle, Jennifer Morrison, Ginnifer Goodwin and more. If missed the first season and want to get ready for the second season of the show in the fall, here’s your chance. 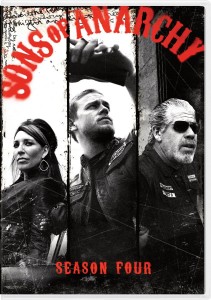 SONS OF ANARCHY: SEASON FOUR – The fourth season of the fan-favorite biker drama comes to DVD just in time for the release of the fifth season coming soon. This is a great way to catch up on the show without having to pay for cable or relive what you have already seen once again in anticipation for the new season on FX.