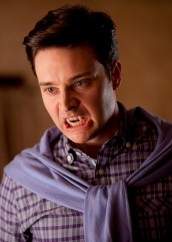 In Part 2 of our exclusive interview with Michael McMillian, who plays anti-vampire reverend turned Sanguinista vampire Steve Newlin on HBO’s TRUE BLOOD, he talks about writing for the TRUE BLOOD and LUCID comics, his work on FIREFLY and THE HILLS HAVE EYES II, and of course more about TRUE BLOOD the series.

AX: Did you always want to be a professional actor?

MICHAEL McMILLIAN: When I was young, I was into writing and I drew a lot. I really thought that I was going to be a comic book artist or an animator. When I was a kid, I always said I wanted to be a Disney animator. And then once I got into theatre when I was a little bit older, I just enjoyed it so much and it was a much more social thing, I think, than sitting alone and drawing. And I didn’t have a lot of discipline for drawing at the end of the day, so I just really got into acting and really, really loved it. I knew by the time I was thirteen or fourteen that that’s what I really wanted to do.

AX: Were you involved in writing comics before TRUE BLOOD?

McMILLIAN: I created a sci-fi/fantasy book called LUCID that was published by Arcadia and produced by Zachary Quinto’s production company, Before the Door Pictures. That was a four-issue title that debuted in 2010 and it’s been collected into a graphic novel this past year. It’s about an alternate universe where government agents are trained in magic, kind of like HARRY POTTER meets 007.

AX: Is that being made into a movie?

McMILLIAN: It’s been optioned by Warner Bros. and it’s in development. I think they are hammering out a treatment right now. It’s one of those things where I sort of give birth to the baby and hand it over to the midwife and see what happens [laughs]. So I don’t know much more than that about where it’s at right now.

AX: Were you already acting on TRUE BLOOD when you became involved in the TRUE BLOOD comics?

McMILLIAN: Yeah, I’ve been playing Steve Newlin now from the third episode of the show. At the end of Season Two, I heard that a TRUE BLOOD comic book was in development and I definitely was interested in it. It was right before LUCID had been published, so I was looking for something new that I could work on in the comic book world, but it wasn’t until the second TRUE BLOOD comic book series, “Tainted Love,” that I got involved. Mark Andreyko, who’s a comic book writer and who was my co-writer on the book and I just pitched to IDW, and IDW sent our pitches to [TRUE BLOOD creator] Alan [Ball] and our storyline got picked and that’s how I got involved with the comics. It’s actually kind of a routine story [laughs].

McMILLIAN: “Tainted Love” is the second TRUE BLOOD comic book series. [It is] a story about a militant vampire group that taints a TruBlood bottling plant with a chemical that makes vampires go crazy. And Jessica [played on the series by Deborah Ann Woll] drinks one of the bad bottles and just starts wreaking havoc in Bon Temps.

AX: This predates the Sanguinistas on Season Five of TRUE BLOOD?

McMILLIAN: It does. I don’t want to give too much away for those who haven’t read it, but in “Tainted Love,” you find out who’s behind the whole thing is not necessarily who we thought, but the idea of a militant vampire group that didn’t want to mainstream came about independently of the Sanguinistas, it came before that, but it’s cool retrospectively. It feels like it really fits in thematically with what’s happening in Season Five.

AX: It says on your IMDB page that you were on the FIREFLY episode “Shindig.” How was that experience?

McMILLIAN: I had one line, it was my very first job out inL.A., but I got to meet and work with Joss Whedon for an hour [laughs]. It was fun, it was great, it was just the kind of show that I love to work on and it was my first job out of the gate, so I was thrilled.

AX: Did you have any idea when you were working no it that it was going to become a cult hit?

McMILLIAN: Well, BUFFY had been so huge, frankly, I think people expected it to last longer than it did, but I don’t think the show had even aired yet when we shot the episode I was in. So I’m sure there were a lot of mixed feelings, but retrospectively, I’m not surprised, because it’s a great show and Joss is a huge talent and people tend to really hold onto his stuff.

McMILLIAN: WHAT I LIKE ABOUT YOU was a sitcom for the WB network that starred Amanda Bynes and Jennie Garth as sisters who were living in New York and it was sort of like a FRIENDS for tweens, just a fun, funny show. I played Amanda Bynes’ on-again, off-again boyfriend Henry.

AX: Was that your first recurring regular gig on a series?

AX: Did that teach you anything that you have found invaluable since then?

McMILLIAN: Oh, sure. It was great. Doing a multi-camera show is a great transition coming from a theatre background, because you have a live audience there, and it’s sort of  a proscenium setting, and I think it was there that I learned to play more towards the camera and [about modifying] performance levels from the theatre for film. When you’re working on a multi-camera [series], you show up to work and you’re putting up a new episode each week, and the script is often rewritten every night, so it was kind of like TV acting boot camp. I loved it.

AX: You’re also in something called THE BANSHEE CHAPTER. Is that related to Alan Ball’s upcoming BANSHEE series?

McMILLIAN: No. That’s just a coincidence. BANSHEE CHAPTER is a horror thriller film that is hopefully coming out some time by the end of the year. It’s written and directed by Blair Erickson, who I went to Carnegie Mellon with, and it’s produced by Zachary Quinto, who I also went to college with, so it’s a new feature film from the guys who are with Before the Door Pictures.

AX: And you were also in THE HILLS HAVE EYES II. Were you one of the soldiers or one of the Eyes?

McMILLIAN: I was one of the soldiers. I was one of the few that survived through the end of the film – spoiler alert. We shot out inMorocco. It was an experience. It was hard work, it was 114 degrees outside and we were in full camo gear and sweating our asses off, but you couldn’t complain. We were shooting a movie. You couldn’t help but think about soldiers who were really out inAfghanistan somewhere, so everyone just held their chin up and had a good time. We were shooting a movie, but it was physical work.

AX: In THE HILLS HAVE EYES II, you’re playing someone who’s scared of monsters, and in TRUE BLOOD, you’re sort of scared of monsters at different times. Is there any difference in playing those kinds of fears?

McMILLIAN: It all has to do with context and with character. That’s the kind of stuff that tends to ground me in the moment and open up my imagination. THE HILLS HAVE EYES II and TRUE BLOOD to me feel like two totally different things, although they have a common theme of horror. And certainly in HILLS HAVE EYES II, there were more scenes where I was literally fighting off monsters and afraid for my life. Steve kind of has managed to slick by most of his enemies and I don’t know how afraid Steve really is. I think he’s too egotistical to be really afraid.

AX: Well, even in Season Two, when Steve thought he was going to get killed in the church, he seemed more concerned about making a statement than afraid for his existence.

McMILLIAN: He really saw himself as a prophet and I think that he really thought in that moment that if they tried to kill him, Jesus was going to step in and save him, or he’d be martyred and it would do more for his cause.

AX: Are you going to continue to write the TRUE BLOOD comics?

McMILLIAN: Yeah.[Co-writer] Ann Nocenti and I have the first twelve issues outlined and I’ll be doing it for at least until the end of the year and finish up those twelve issues and then see how that’s gone. So far, it’s going great. I think the door is open to continue on the book for as long as I’d like, which is great. This is the new TRUE BLOOD ongoing series. The first story arc is called “Where Were You?” It looks back on Sookie [played in the series by Anna Paquin] and Eric [Alexander Skarsgard] and Bill [Stephen Moyer] and Alcide [Joe Manganiello] and where they were in their lives when vampires came out of the coffin. And then there’s a contemporary, present-day story that’s uniting these flashbacks. It’s being illustrated by a super-talented artist named Michael Gaydos who’s done a bunch of work for Marvel Comics and he’s fantastic. [Issue Three, which came out] at the end of July, that’s a really great issue that stars Bill. I’m super-excited about it. It also features the first reappearance of punk Bill. We had that great scene in Season Four flashback toLondon in 1982 with Bill in it as a punk [laughs]. I loved that.

AX: Do fans recognize you from TRUE BLOOD?

McMILLIAN: I’ve interacted with a ton of fans and everyone’s great.

AX: Is this what you expected fame to look like?

McMILLIAN: I don’t know. To be honest, I don’t think too much about fame and I don’t know if what I’m experiencing is fame [laughs]. I’ve been around people who are much more famous than me and I’ve seen that experience and that seems fun but also a little scary, when everybody knows who you are and you lose your anonymity. I’m not sure that I would really enjoy that, to be honest. I would love to have a career that allows me to play great characters but also let me hang out a little bit under the radar. I want to be able to go to the comic book store [laughs]. I don’t want to lose my personal life.

McMILLIAN: I’ll be going back to work on HOT IN CLEVELAND in August – I play Janes Leeves’ son on that show, which is a lot of fun. It’s great working with those ladies – they’re all so good.

AX: Anything else you’d like to say about TRUE BLOOD or your career overall?

McMILLIAN: Just that I’ve been having the time of my life working on the show and I’m so happy at the response from fans for Vampire Steve this season. It’s been really, really great.