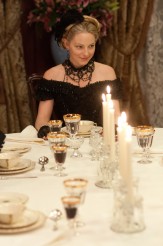 COPPER is still holding my attention, and sometimes that’s not the easiest thing in the whole wide world. I have a bad habit of getting up and doing other things when watching television programs that bore me, instead of sitting and faithfully watching every second of an episode. So far COPPER has held my attention, and I watch knowing that there might some subtle thing in a two minute segment that would mean the difference to either knowing and understanding part of a larger mystery or not having a damn clue when it is brought up again.

This episode “In the Hands of an Angry God” deals with the racial tensions in the Five Points slum area of New York. We saw a bit of this in the pilot with Dr. Matthew Freeman (Ato Essandoh) and his wife Sara (Tessa Thompson), when they were speaking about her brothers being lynched by Irishmen during the riots; so it’s clear in this episode that the tensions from the riots haven’t cooled down one degree. This is a case of color proving a man’s guilt in a murder investigation, which then leads down a winding path with several red herrings along the way. I like all of the plot twists and distractions in this episode, and it was really interesting to see where different characters’ loyalties lay based just on the color of someone’s skin.

One of the most intriguing things about this series got a bit darker in this episode. Detective Corcoran (Tom Weston-Jones) is a man with a tragic past that includes a murdered daughter and a wife that has gone missing while he was off fighting in the Civil War. He’s been looking for a locket of his wife’s which turns up in this episode in a pawn shop. Molly (Tanya Fischer) buys it, thinking this is her in to Corcoran’s heart, but her plans are thwarted by her Madame Eva (Franka Potente). Which leads me to a side tangent of whether Eva has any idea that one of her own girls has designs on her man?

Anywho, so Eva finds out the locket was pawned by a woman who takes care of lady problems, then follows up to find said woman murdered in her place of business. So does this mean that Corcoran’s wife had an abortion, paid for it with the locket, and then took off? The mystery deepens.

Plus speaking of Corcoran … that tom cat does get around! In this episode alone he bangs one out with Eva, makes a few passes at Elizabeth Haverford (Anastasia Griffith) and then narrowly avoids having Annie (Kiara Glasco) in his bed. Well at least he didn’t sleep with the kid so he has some morals intact, at least far better than a lot of folks on this show.

Again the costumes and sets are fantastic in this period drama, and I look forward to what mysteries each week will bring!