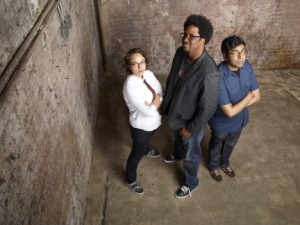 At an event held by FX for the television press,Bell takes some time to talk about his show, his comedy and his distinctive style.

ASSIGNMENT X: As a comedian, did you have any desire to see Mitt Romney win the election, just in terms of comedic fodder?

W. KAMAU BELL: I’m not that guy. I’ve written more jokes about Barack Obama than I ever wrote about Bush, so I’m not the guy who’s like, “I hope what’s good for comedy …” If peace reigns over the world, and there’s no more ability to be funny, I’ll be okay. I’ll get a job [laughs]. I’ll work at Starbucks.

BELL: I think Jerry Seinfeld said that any time you’re angry, that means there’s comedy happening. And so for me, that’s the thing. I walk around the world, and things happen, and I get frustrated, and my brain naturally goes to comedy, because I’m a comedian. I can only write jokes about things that I care about, so I don’t sit down with a list of subjects and try to write jokes about them. I live in the world, and the world happens, and I watch a lot of media and news and things frustrate me, and I come out on stage with punch-lines.

AX: Do you ever get so mad you just can’t be funny?

AX: Do you feel you’re in a similar situation to Jon Stewart and THE DAILY SHOW?

BELL: Well, no. I have a lot of respect for Jon Stewart. I certainly get that this guy is a genius, and he’s assembled a genius staff around him. We’re sort of in a similar format, [but] we’re starting from the beginning – we’re not going to be able to be that. We hope to build up to that kind of thing. We’re assembling the staff and building a machine, so hopefully we can get there. But certainly Jon Stewart is a genius. I watched the show to see how he handled the Aurora [Colorado theatre shootings] situation, because I was like, “How would you do that?” And it’s really instructive.

AX: Where are you from originally?

BELL: I grew up all over, but mostly Chicago.

AX: Who were/are your inspirations in comedy?

BELL: Chris Rock – it’s true, I’m also legally obligated to say it, but absolutely true [laughs]. I was a weird person who was equally a fan of Bill Cosby and Eddie Murphy. I felt in between them. I felt like I didn’t have to pick a team. I was also a big fan of Margaret Cho, and Bill Hicks is my favorite comic of all time. Not that I’m anything like Bill Hicks, but to me, that’s how to do this type of comedy. He only talked about things that he cared about, he put himself totally into it and let the chips fall where they may.

AX: Is it particularly helpful to you in terms of subject matter that this is an election year, or would you be able to do the show just as easily if it weren’t?

BELL: Well, I definitely am a comedian not during election years, but when we got the show, Chris was like, “We have to get this on air before the election.” So that was definitely the thing that pushed us to try to get it on air was, I wanted to be a part of that national discussion. When you watch the news shows, the cable news shows, they will say, “Here’s what happened on THE DAILY SHOW last night. Here’s what happened on Maher. Here’s what happened on TOTALLY BIASED.” I want to be part of that national discussion. [On the other hand], as a comic, if you get caught up in trying to influence opinion, you’re probably not as funny as you can be. So I definitely like the idea of putting out my ideas, and sort of seeing where they fall, but if it’s not hilarious, it’s not doing its job. I’m not smart enough to be Rachel Maddow.

AX: Do you worry that you intend it to be funny, but somebody else will take it as a political stance?

BELL: Do I worry about that? No, I’m excited about that [laughs], because everything I say, I want to be able to believe in, whether it’s about politics or the Kardashians, I want people to know that I mean what I say. So some people will think it’s funny and some people will not, but that’s all of comedy. That’s Jim Gaffigan. Some people think HOT POCKETS is funny, some people don’t.

AX: Are you sorry TOTALLY BIASED didn’t get to go on during the Republican primaries?

BELL: I’m glad we’re on the air now. Right now, I’m in the bonus round. This [show] was not supposed to happen, this was all about the new media in the twenty-first century and the fact that FX takes chances and Chris Rock saw me in a club in New York, so everything that happens now, it’s just sort of like, I’m just going to put everything I can into it to make it as good as possible. I don’t have any regret about what I didn’t do. I’m just going to do the best shows that I can and let John [Landgraf, FX president] and the people at FX decide what we do from there.

AX: How old is your child going to have to be before she can see your act?

BELL: Oh, she’s already seen my act. She’s slept through my act. She’s fourteen months old. She’s been to shows – she’s not paying that much attention, not that big a fan. Much bigger a fan of Olivia. But I can’t imagine – this is the family business. I saw my mom’s act – it’s just her act was as a black militant, so … [laughs]

AX: Does she think you’re funny?

AX: You have a live stand-up show where you end racism in an hour. Can you give us a brief explanation of how that works?

BELL: If I do it now, it’ll make it worse in a few minutes. You have to cut to get into the wound before you can solve the problem. It’s similar to the show – it’s very topical, it’s about the news, but it also gets personal about my life as a black guy married to a white woman with a mixed-race baby. I’m on the front lines of race, so it’s really just about making us ask different questions that we don’t really ask, and also getting people to talk about race and racism when they’re not angry. That’s really what the message of the show is.

AX: Do audience members ever get angry?

BELL: Yes, I have people walk out angry, but I feel like, mission accomplished. Because if for some reason, something I say makes you angry enough that you, “Arrggh!”, then something’s moving inside of you and I feel like that’s part of the show, too.

AX: What would you say is wrong with how TV deals with race or talks about race?

BELL: Well, one, it’s like I said before, we only talk about race and racism when we’re angry, so it’s already too late to have a discussion, and two, we think about it in a very linear way, because even as a black guy in America, I feel like the racial discussions usually center around black and white, and this country, more and more, it’s not going to be centered around black and white. So I feel like we always have a very linear discussion about it, and we always wait until we’re angry. That’s the biggest problem. I think if we talked about it when we weren’t angry, then the discussion would go further. And we also get really invested in our side of the discussion, so people don’t listen a lot of times.

AX: Does TOTALLY BIASED talk about it in a different way?

BELL: Well, we wanted to address “stop and frisk,” the New York law where the police can pull you over at any point just to search you. Most of the people being pulled over are black and Latino men. So we went and talked to people about it, but not after something bad happened, but just on the street, “What are your thoughts about it?” So you get people talking about it in a way that is maybe not as strident or as charged up. You get people talking about it where they actually can be reflective about it.

AX: Do you think it’s possible that racism will end someday?

BELL: Over an infinite timeline, yes [laughs], but over the lifetime of me and the people who will always be related to me, probably not.