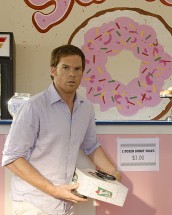 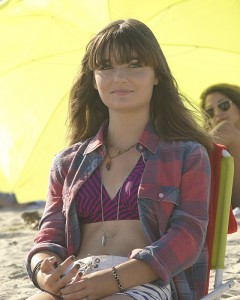 With Dexter (Michael C. Hall) having an affair and possibly in love with fellow serial killer Hannah McKay (Yvonne Strahovski), and Dexter’s stepsister Deb (Jennifer Carpenter) asking him to kill Hannah, could things get any more tense? Sure they could, and do, in the new DEXTER episode “Argentina.”

Dexter manages to talk Debra out of wanting him to kill Hannah by saying that he cares too much about Debra to let her compromise who she really is by sanctioning a murder. Debra buys it and goes back to trying to nail Hannah legally. However, this all comes apart when Dexter tells Debra that he’s seeing Hannah. Debra is furious – and then tells Dexter that she was in love with him. Dexter is stunned.

Meanwhile, Isaak Sirko (Ray Stevenson) tries to shoot Dexter while Dexter is buying donuts. This fails, but when Isaak refuses to call off his vendetta against Dexter, Isaak’s underling George Novikov (Jason Gedrick) calls the big bosses inKiev, explains the situation and gets the okay for a hit on Isaak. George also blackmails Quinn (Desmond Harrington) into serving as a money bag man.

However, Dexter arrives at Isaak’s apartment while Isaak is out and the hit man is lying in wait. The upshot is that Dexter kills the hit man, Isaak finds the body and calls the cops, and Dexter winds up analyzing the crime scene on behalf of Miami Metro. LaGuerta (Lauren Velez), still conducting her solo investigation into the Bay Harbor Butcher, turns up evidence implicating Dexter.

Meanwhile, Dexter’s little son Harrison and stepchildren Astor (Christina Robinson) and Cody (Preston Bailey) are in town. Since Isaak knows where Dexter lives, the whole family is camped out at Debra’s. Astor has been smoking marijuana. After the whole exchange with Dexter about Hannah, Deb winds up sharing a joint with Astor.

Dexter tracks Isaak to a gay bar. The two men converse. Dexter finally learns what we’ve already guessed – the deceased Viktor was Isaak’s lover. Talking to a fellow killer, Dexter is interested in Isaak’s opinions about love. Isaak believes in it; Dexter is not sure he’s ever truly felt it, or exactly what it is he feels for Hannah. Isaak observes that under different circumstances, he and Dexter could be friends. Dexter doesn’t want to have to kill Isaak and urges him to just leave the country, but Isaak is steadfast in his need to avenge Viktor, so somebody will have to die here.

Everybody is so good in every scene that, although things of course play sequentially, it’s as though we don’t know where to look. There’s the odd, calm, uncertain flirtation/urgency between Dexter and Hannah, Deb’s rage and Dexter’s numb astonishment in its face, the honesty and menace between Dexter and Isaak.

There’s also fine work from Robinson as a teenager who is essentially likable, even though she doesn’t detect that what seems to be adults lecturing her about pot is really Dexter and Debra talking about their own problems.

With all of DEXTER’s issues in full swing – when, if ever, is killing justified, what constitutes love, what’s the difference between justice and vengeance, is it all a matter of who we get to know first – “Argentina” could hardly be more compelling. We may not cry for this “Argentina,” but we’re often made to gasp.