the vampire diaries review we all go a little mad sometimes

TV Review: THE VAMPIRE DIARIES – Season 4 – “We All Go a Little Mad Sometimes”

Elena gets nailed with a vampire hunter death curse! 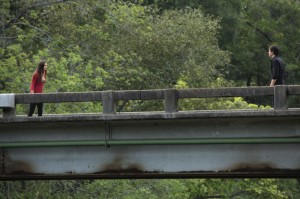 At least in THE VAMPIRE DIARIES “We All Go a Little Mad Sometimes” we find out that Elena (Nina Dobrev) isn’t really just losing her mind after taking her first human life. Mystic Falls’ resident vampire hunter Connor Jordan (Todd Williams) actually had a death curse that released when Elena killed him last episode and he is haunting her in an effort to get her to end her own life. I was concerned that Elena was just going buggy because she wasn’t handling the transition very well, and I really was getting disappointed if that was the direction they were taking the character. I mean, Caroline (Candice Accola) used to be Miss Mystic Falls, and she has handled her transition a hell of a lot better than Elena has so far.

Part of the haunting and guilt sequences got my hopes up for a split second thinking that Katherine (Nina Dobrev) was actually back. I love that character and I think we need her to come back for real instead of as a part of Elena’s fevered mind. I’m sure she would have a thing or two to say about her doppelganger now being a vampire like she is, and might even be a good type of new instructor for Elena (on the proviso a cure isn’t found).

Speaking of finding a cure, now that Jeremy (Steven R. McQueen) has officially killed his first vampire as a hunter, he’s going to have to kill more in order for the mark to grow so they can all mount an expedition to find the cure for Elena. Where are our gang going to find vampires to spare in Mystic Falls? I have no idea how many it will take for the mark to grow to completion, but it’s going to take more than any ‘red shirt’ vamps that might be lurking in the background at the moment. Of course, Klaus (Joseph Morgan) wants this cure as badly as anyone for Elena, so he could just compel whatever vampires they find to walk willingly into a stake in Jeremy’s hand.

Speaking of Klaus, anyone else get the distinct feeling once again, that he actually has feelings for Caroline? I don’t think that would be such a bad match. I love Tyler (Michael Trevino), but he’s got some kind of side thing going with the SECRET CIRCLE cast off, Hayley (Phoebe Tonkin). Which also brings me to another point. Mystic Falls is clearly where other shows deposit their casts once they cease to be. We have two cast members from THE NINE LIVES OF CHLOE KING on here now, and a SECRET CIRCLE cast member. I would not be surprised to see more pop up as this season goes on.

The big hooha moment of the episode is when Elena and Stefan (Paul Wesley) kind of mutually decide to call it quits. I feel like Elena has outgrown Stefan’s brand of almost adoring puppy love, and needs something more adult like what she can get from Damon (Ian Somerhalder). Both Elena and Stefan know her feelings for Damon aren’t going away, and it’s time everyone has to deal with the fact that Elena WANTS Damon. Who wouldn’t?

Last but no least let me throw out the idea that Bonnie’s (Kat Graham university professor named Shane (David Alpay), is really an immortal being named Silas that Shane himself gave a talk on in this episode. Why else would it be brought up and addressed in such a way? I love this show, but it’s not really subtle with it’s teases and plants.

AGREE? DISAGREE? LET YOU VOICE BE HEARD. COMMENT BELOW!