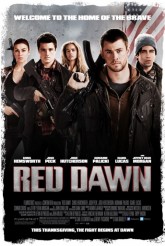 A poor remake that goes downhill from an implausible set-up

Whether you remember director John Milius’ 1984 RED DAWN as a bona fide classic, a camp entertainment or a WTF bit of paramilitary fantasy, the new remake stands up poorly.

In the original, a handful of teenagers come together as a rebel unit that fights against the Russian occupation of the United States. In the remake, we’re in Spokane,Washington, where on-leave U.S. Marine Jed Eckert (Chris Hemsworth) is visiting his father (Brett Cullen) and younger brother Matt (Josh Peck) when the West Coast is invaded byNorth Korea.

Okay, stop right here. North Korea may indeed have, as the film informs us, the fourth-largest army on the planet, but still, how exactly does a country that size invade the U.S.? It’s known that when the RED DAWN remake was filmed, the enemy was China, but after production, someone realized that this meant the would-be commercial blockbuster would therefore be unwelcome in China, a now-profitable movie marketplace. So the costumes, flags, subtitles, etc. were changed to be North Korean in post-production. This may or may not make the film more palatable to the Chinese, but it makes it implausible worldwide.

There are movies where there are basic issues that you just accept, because what’s happening otherwise is gripping – the recent LOOPER is a good example. If the only problem with RED DAWN was the identity of the invading army and everything else worked, then complaining about the North Koreans would just be nitpicking. Here, however, what’s happening feels like a pilot for a derivative TV series, with predictable emotional beats layered in between spurts of action and things exploding and stock villains bullying people for no good reason. Whatever one thought of the original RED DAWN, it seemed heartfelt; here, it seems like the filmmakers are working from a printout of character traits, action sequences and pacing that have been proven to have worked in the past.

A list of specific complaints would be quite long, but this is the kind of film where a character’s redneck credentials are indicated by his repeated use of the word “mo-tard” and where a delicately beautiful high school student retains her loveliness unscathed after months in a prison camp.

Hemsworth is sincere and charismatic, Peck does yeoman work as the troubled sibling striving to live up to the family ideal, and Will Yun Lee finds a through-line as the ranking North Korean officer on site.

For people who are remake completionists or just want to see the kind of young adult action schlock the way it used to be made – minus conviction – RED DAWN may be a fun diversion. For others, it will be an assault on valuable time and film-viewing sensibilities.