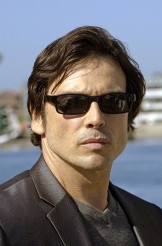 The actor talks about working with great people 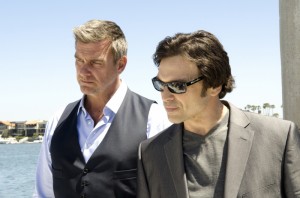 Gedrick came to public attention in heroic roles, like the lead in IRON EAGLE and firefighter Krizminski in BACKDRAFT. Lately, though, he’s played more unsavory types. Talking at a party thrown poolside at the Hollywood Roosevelt Hotel in celebration of the release of DEXTER Season 6 on home video, Gedrick chats about his current dirty dealer.

JASON GEDRICK: Yes. I play an American-born [man] with Russian roots character named George, who runs a gentlemen’s club for Ray Stevenson’s character. I’m his wingman, so to speak.

AX: Is this the club that gets shut down at the beginning of Season 7?

GEDRICK: Well, they try to. Then they realize it was just a misunderstanding – wink, wink, wink. When [the cops come in and say], “Is there a manager here,” you can see there’s some history between Desmond’s character Quinn and my character. And that’s the seed of what’s to come.

AX: Would you say this role a departure for you?

GEDRICK: You know what’s really funny? I think the career path that I’ve had just started getting really good in the last four years. I’ve had some really great roles along the way, but this new perception of what I’m capable of just started about three, four years ago, and this is another addition to that sort of rebirth. It’s like a renaissance. I’ve had a lot of rebirths in this career, and the privilege of being on DEXTER is a huge one.

AX: Were you a fan of the show before you got the part?

GEDRICK: I was. I was incredibly impressed by the simplicity of the show. When you watch it, it seems very lean – the production of it, the stark look of Miami. You still get that almost Seventies deco vibe, and yet when you’re on the show, and you get a sense of what the storyline’s arcs are, you see how sophisticated the writing is, so sophisticated it’s actually quite simple, but in order to execute it, they have a very, very clear path, and everything is ironed and raked over. I mean, I couldn’t believe, given how laid-back the set is, how intense the show is. 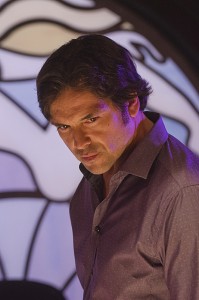 AX: Do you have to do any major stunts or deal with any major gore gunk?

GEDRICK: Not as of yet, although Ray Stevenson is basically a stunt every day. He’s got either jokes or anecdotes or stories about the old days, or stories about other shows he’s worked on. He definitely keeps a very light and fun atmosphere to work in. When I know that I’m going to be on set and we’re going to hang, it’s an easy drive to work.

AX: Is it distracting working with the actresses who are playing George’s employees, given that some of them are not fully clothed?

GEDRICK: [laughs] It is very distracting. However, I am forced, through the character, to be a very professional manager of this gentlemen’s club. But they’re gorgeous, they’re drop-dead gorgeous. Again, the common thread [on the DEXTER set] seems to be that everyone has either checked their egos in at the door, been contracted not to have an ego, or I don’t know. Everyone is so incredibly nice. And I get a little gaga and thank my stars that I’m part of this team for this season.

GEDRICK: I have a show coming out in December called THE WISHING TREE. It’s a Hallmark film and it’s just wonderfully played by the actors.