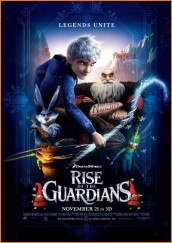 RISE OF THE GUARDIANS is a 3D animated feature that brushes off the hoarfrost from notions like the importance of a child’s sense of wonder and makes something entertaining and even sometimes moving from it. Scripted by David Lindsay-Abaire from William Joyce’s short film and novel, RISE OF THE GUARDIANS actually feels like a fairytale, the kind that used to enthrall most of us when we were young, and reminds us why the form is so successful when done well.

Jack Frost (voiced by Chris Pine) looks like a young boy. He’s several hundred years old, but can’t remember where he’s from or who he used to be. All he knows is that the Man in the Moon told him who he is now, and ever since, he’s been there to make snow and frost where children can play and skate.

Jack doesn’t want to get caught up in world affairs, but he doesn’t have much choice. He’s summoned by North, aka Santa Claus (voiced by Alec Baldwin), and told it’s been decreed by the Man in the Moon that Jack join the ranks of the Guardians. Besides North, there’s the Easter Bunny (voiced by Hugh Jackman), the Tooth Fairy (voiced by Isla Fisher) and the silent Sandman, who communicates in images. The long-dormant Pitch Black (voiced by Jude Law), aka the Boogeyman, is back and wants to replace the dreams of children the world over with his nightmares. The Guardians vow to stop him. In the process, Jack learns the value of trust, teamwork and finds out how his own history informs his future.

This sort of plot could go any which way, but director Peter Ramsey, the writers and the designers have come up with something that has beautiful, crazy, inventive joy at every turn. Making Santa a hearty Russian and the Easter Bunny a lanky, limber Australian are great choices, but virtually every small detail makes us smile. Santa’s elves are hilarious, as are his other, less famous helpers. The Easter Bunny’s domain is like a combination of Celtic heaven (rabbits are big in Celtic lore and some believe that Easter is derived from the Celtic celebration of Ostra) and Easter Island.

As for Pitch, the character looks like a tragic villain as painted by Clive Barker for one of his ABARAT books. Law is surprisingly sympathetic as the lonely figure, while Pine is full of youthful vigor as Jack.Baldwin is the epitome of Russian jolliness as the optimistic Santa, while Jackman’s sardonic samurai rabbit is reliably enjoyable.

RISE OF THE GUARDIANS is nominally about saving Easter (even though it’s being released just ahead of Christmas), but it’s one of those movies that seems like it should offend neither secular viewers nor people of faith. The film encourages belief, but doesn’t demand belief in one particular version of “good.” Nor does it ever become humorlessly preachy; there is wit woven throughout, from impatient elves to a hasty modern approach to the Tooth Fairy’s deadlines.

One can take exception when Pitch laments that nobody remembers the Boogeyman nowadays – has the poor guy tried haunting a multiplex lately? – but mostly, RISE OF THE GUARDIANS is blithe and lovely, smart and funny. It’s an honest-to-goodness family film that can be enjoyed by both kids and adults.

TCA 2011: ABC talks about new series ONCE UPON A TIME and its sustaina...
Exclusive Interview: Tony Denison talks MAJOR CRIMES and THE CLOSER
CD review: BENEATH and WE STEAL SECRETS
CD Review: PRISONERS soundtrack